Share All sharing options for: (Another) New Knicks Curl Play

Mike D'Antoni likes to cook soup, probably. The second he had a fresh batch of ingredients, he started jackpotting around with some new recipes. I already touched on one of the recipes he unveiled against the Magic, but he's been serving up a heartier, more tasty one over the last few games. I think he calls the play Ossobuco. Like the former, its focus is to get Amare Stoudemire the ball off a curl because through motion is one of the best ways to feed him. So, think of a mobile Amar'e as the base of the offense - the mise en place, if you will.

It begins with the ball on the left wing. Amar'e (or in this case, Shawne Williams) sets a screen for Carmelo Anthony who cuts across the lane and into the left post. As Melo cuts across, the point guard and center set staggering screens for Amar'e. 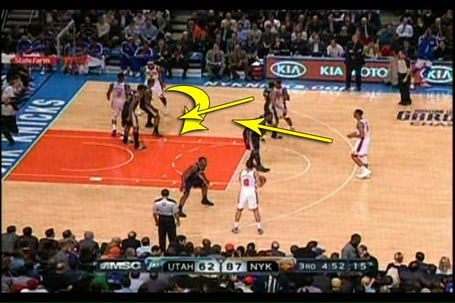 If the defense behaves, Amar'e is free for his soaking wet midrange jumper off the curl. 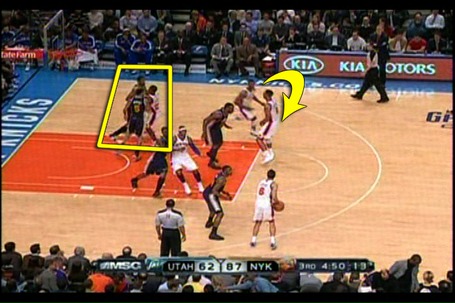 Now, Shawne WIlliams' midrange jumper is pretty arid but the play is ran to perfection.

Here's another example with Amar'e's jumper.

Of course, the play isn't always this crisp against teams more enthused than the Utah Jazz this particular evening, so let's have a look at a few variations that come from this set.

Another option is a simple, reset pick-and-roll with the point guard instead of the catch-and-shoot. On the first clip, I think Extra E passes on a good shoot. He has plenty of room to get it off with Dirk Nowitzki recovering from the stagger screen but he opts to reset with Toney Douglas. When Jared Jeffries clears the right side, the play results in a side pick-and-roll where Extra E still gets off a good shot but comes up empty. Jeff Van Gundy always says that the first open shot a team gets is often times the best shot which was probably the case here. 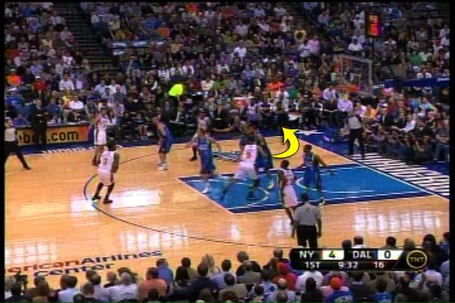 On the second clip, Chauncey Billups doesn't clear out the same way Jeffries does and Amar'e sets a simple screen to free up Douglas. 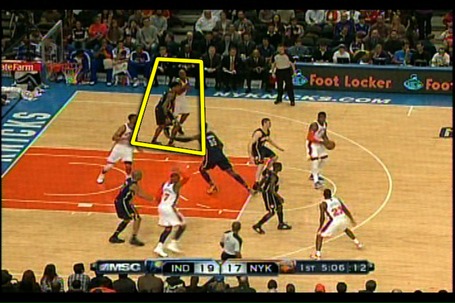 Douglas' defender goes under the screen and gives him an open shot.

The other variation is the almost forgotten decoy of the set. The first screen set by Amar'e is designed to get someone open in the post. On the first clip, Melo gets the step on his defender and Marc Gasol doesn't switch, leaving him free to receive the pass under the basket. The play ends with a smooth pass to Amar'e for an easy bucket. 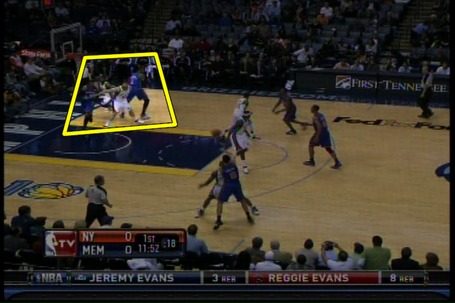 Jason Kidd defends the play differently by going over the screen, hoping to cut Landry Fields off on his cut. The problem is he has his back turned to the entry passer, Melo, who hits him with a bullet. 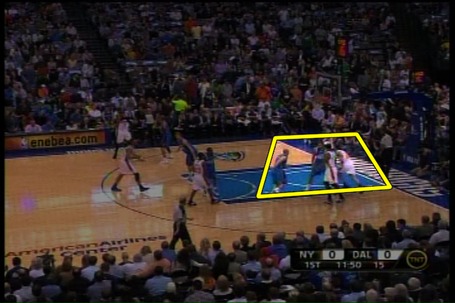 Fields draws the foul on the first play of the game.

D'Antoni's soup highlights everyone's strengths. Amar'e's been dead-eye from midrange of late shooting 50% and 53% from 10-15 feet and 16-23 feet respectively over his last ten games. This play gets him in those spots for catch-and-shoot jumpers. It also has the potential of getting Melo deep post position where he feels most comfortable. And of course, if everything breaks down, a simple pick-and-roll may be all that's needed to bail the team out.