The Knicks unveiled a few new sets last night against the Magic that involved the three players you would expect. The team continued to run one in particular that showed effectiveness early. The problem, of course, is that Dwight Howard exists. Chocolate Shoulders affects the defensive side of the ball so dominantly that you wonder about the fairness of it all. And as the Knicks called up their new set to close out the game, Howard, with the help of some proper adjustments from Stan Van Gundy, almost single-handedly prevented it from having any success.

The play begins with Chauncey Billups and Carmelo Anthony running a high pick and roll with two shooters weakside for spacing. As Melo rolls to the paint, Amar'e Stoudemire follows him with a curl, ready to receive the pass. Of course, the pass can come to either player, but the Knicks were primarily trying to get it to Amar'e. 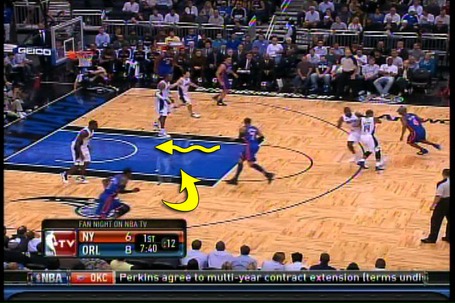 When Melo rolls to the paint, Amar'e's man rotates over to help as Melo's original man recovers from the screen. This gives Amar'e space to catch the ball in motion on his curl. As Melo clears out, Amar'e receives the pass with a step on his man. Howard is the last line of defense with Shawne Williams in the corner trying to keep him honest. 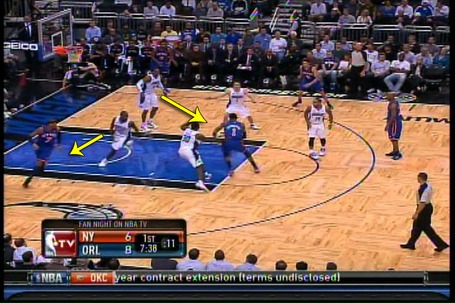 The result is a clear-path dunk for Amar'e.

The play works here because Brandon Bass is guarding Amar'e and Dwight is on Extra E. The Knicks are pulling Dwight's ability to contest out of the paint as well as giving Amar'e the speed advantage on Bass. In the fourth quarter, the Magic changed this and matched Dwight on Amar'e. The difference changed the outcomes entirely.

Ryan Anderson opts not to hedge the screen on this instance and sticks to Williams as he rolls through the paint. 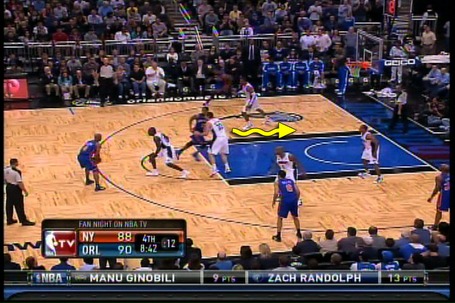 Dwight has no need to help on the roll since Williams is covered step for step and sticks with Amar'e.

This leaves Dwight in perfect position to meet Amar'e on the curl. Play ends in a turnover.

The next play is an example of Melo nut fully understanding the offensive principles. 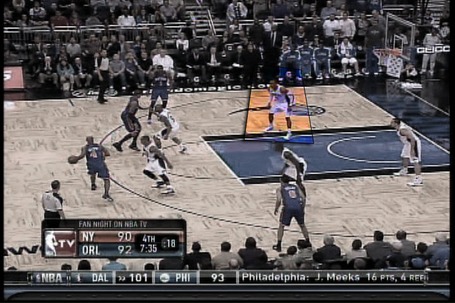 The Knicks slip all of their picks, meaning they don't make contact with the defender. They just alter the defender's angle then quickly roll to the basket. Here, Melo sets a full, stationary pick which throws off the timing of the entire play. It isn't obvious in the still frame, but Melo's roll is way too late which allows Quentin Richardson to get in front of him and allows Dwight to meet Amar'e on the pass again.

The ball actually comes back to Billups who's able to get a questionable call and three free throws but the play broke down entirely.

I think Billups misses an opportunity on this next play. 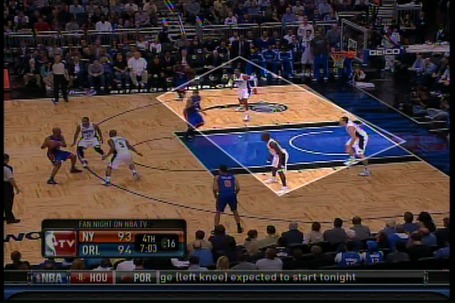 The Knicks properly space the Magic out and Melo is free for a pass in the paint. 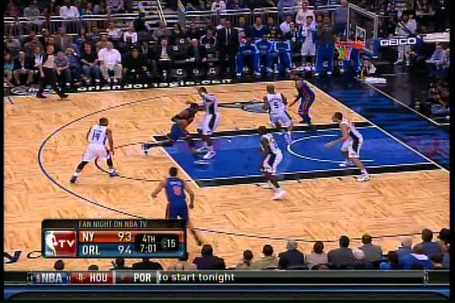 Billups fails to capitalize, however, and Howard is able to impede Amar'e's curl again by beating him to the spot.

Even with the offensive rebound, Dwight affects the play again with one of his five blocks.

The final instance ends with Billups missing another three. Although it was a decent shot, you wonder if Howard's defense on previous plays is intimidating them from attacking closer to the basket.

Once Stan Van Gundy put Dwight on Amar'e, all speed advantages were nullified. He was able to drop back to prevent the roll and still beat Amar'e to his spot. On top of that, Dwight's awareness was so high that he positioned himself properly before each pass was made. What we're left wondering is why Amar'e didn't catch-and-shoot instead of driving into Howard's chest time and again. I'm also curious about Billups' reluctance to look for his own shot in these sets because in some instances, the defenders sagged off on the screen. Regardless, Dwight shut down the set the moment he got the assignment and the Knicks' offense degraded shortly after.