Share All sharing options for: Pre-Game Reconnaissance: Knicks vs. Hornets- 3/2/11

Sources close to the situation tell me that the "Hornets" invading Madison Square Garden are, in fact, gigantic men wearing matching outfits. You can learn about these men after the jump.

- Why doesn't anybody call New Orleans "The 'Nets"? I see no good reason not to.

- Per Hoopdata, the Hornets boast the league's sixth most efficient defense. They force a lot of turnovers and keep the opposition off the line and off the offensive glass. However...

- They've sucked of late. Like a lot. New Orleans has dropped seven of their last ten, including an embarrassing loss in Toronto last night. Chris Paul has been pretty dreadful over that stretch. Actually, let's just jump right into our "Wassup with the Hornets!?" segment,

Wassup with the Hornets!?

Here's my good friend Rohan on the current state of the 'Nets.

Rough times in Hornets land, fueled in large part by the guy that might end up in a Knicks uniform next year; let me put it this way: I put the odds at 50-50 that Toney Douglas outplays Chris Paul tonight. For serious. All right, gotta run Toasties, this was real.

#11 David Andersen- David's face is not the product of natural human development, but the composite of every mugshot of every man who's ever been arrested for indecent exposure.

#1 Trevor Ariza- Every time Trevor returns to New York, he visits his old locker to sneak another nibble of a Crunch bar that he left there in 2006.

#15 Marcus Banks- Marcus is apparently still in the NBA.

#34 Aaron Gray- Aaron has unknowingly had a tranquilizer dart embedded in his lower back since that incident at the aquarium back in '08.

#24 Carl Landry- Upon arriving in New Orleans from Sacramento, Carl was given a tour of the Hornets' practice facility, locker room, and available amenities. New Orleans officials emphasized their state-of-the-art equipment and excellent team of medical professionals, but Carl seemed most excited that he'd be allowed to eat "people food".

#30 David West- David maintains that little patch of hair on his chin to hide his third nipple.

Chris Paul's contract expires at some point in the next decade, which means that the New York media will waste no time in needling him about the prospects of joining the Knicks some day. After sitting through this nonsense with LeBron James, Dwyane Wade, and Carmelo Anthony, I've put together a handy list of answers to deter the harassment.

Q: Chris, what can you tell us about the possibility of you joining the Knicks when your contract expires?

1. "I will, indeed, be joining the Knicks when my contract expires". [Make sure to take a moment to appreciate the sound of several dozen grown men shitting themselves simultaneously.]

2. "I will not, in fact, be joining the Knicks as a free agent. I will be taking my talents to the Western Provinces. After much deliberation, I will be a Saskatchewan Roughrider".

3. "Have you guys seen The Eagle? I will only be answering questions about The Eagle."

Dan: With Chauncey Billups out, it'll be interesting to see what we can get out of Anthony Carter and Toney Douglas

Dan: I mean, Carter's looked decent running the point, and I bet we'll play those two alongside one another quite a bit. Both should see some minutes guarding Chris Paul.

Dan: Well, I think Mike will also experiment with Carmelo Anthony as sort of a point forward. In certain lineups, he can bring the ball up and, if he's up for it, even handle the ball at the top of the pick-and-roll.

Dan: I didn't say anything about fish. Where are you getting this?

"What is that a fucking bug or some shit? That's fucking looptid, bro. I've never even seen a turquoise bug before. And why does his tummy have that looptid-ass "H" on it? Shit is looptid. Do bugs have hands? Probably not. This is so looptid." 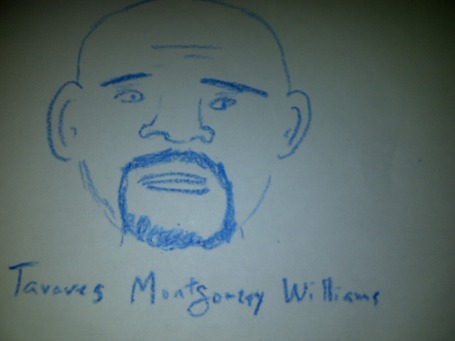