Share All sharing options for: Pre-Game Reconnaissance: Knicks vs. Celtics- 3/21/11

Apparently, Boston has their own basketball team with jerseys and everything. Weird.

- The Celtics, as we know, are one of the league's most efficient defensive teams. They force their opponents into bad shots and turnovers galore. Assholes.

- As usual, Brendan Brown's scouting report is a must-read if you haven't been watching the Celtics and want to know what to expect. (Or maybe you really like surprises.)

- The Celtics have alternated wins and losses in each of their last six games. Most recently, they beat the Hornets on Saturday in New Orleans...so I guess that bodes well for us. I've always been a big fan of patterns, for the record.

- The Knicks are 0-2 against the Celtics this season with a close loss in October and an even closer one (like tenths of a second close) in mid-December. I'm still kind of choked up about that second one.

Wassup with the Celtics?

Considered contenders by any estimation but no longer favorites by most, the Celtics sit tenuously with 14 games remaining in their season. The Bulls are challenging for Eastern Conference supremacy. The Heat are suddenly charging. The Lakers look terrific out West. The Spurs still have the NBA's best record. And the Celtics, well, they have---by their lofty standards---sucked.

They've lost four times in their past seven games, and things would actually be worse if not for a 15-point comeback against the Hornets on Saturday. The Celtics' cold streak coincides (somewhat) with the Jeff Green/Nenad Krstic trade, though they've both played reasonably well. The most glaring problem, oddly enough, has been Rajon Rondo. Rondo, bothered by at least one injury, suddenly looks considerably less than Stockton-esque. He has been outplayed by Mo Williams, Kyle Lowry and Darren Collison (among others) during his eight-game streak of single-digit assists. Things have regressed so far for Rondo that after the Hornets game, when he scored a meager nine points to go along with five dimes, Hall of Fame writer Jackie MacMullan wrote a column titled "Rajon Rondo rounding into form". No, really. She did. And I don't even think she was being sarcastic.

One bright spot during the darkness has been Boston's bench, which suddenly impacts games positively (as Knicks fans probably know, losing Nate Robinson certainly improves shot selection, though it decreases on-bench celebrations). But the past couple weeks have been bleak, with cries of despair echoing throughout Celtics nation. Beating the Knicks tonight isn't just about one win, for these Celtics. It's about restoring confidence, regaining rhythm, building chemistry with the team's five newcomers (six, if you want to count Delonte West, who missed most of the season with a wrist injury), keeping pace with the Bulls, and returning to championship-caliber play.

When I put it that way, tonight's game means quite a bit.

#5 Kevin Garnett- True to his volcanic personality, Kevin washes down his pre-game meal with no less than two glasses of molten lava.

#0- Avery Bradley- Upon being called up from the Maine Red Claws, Avery traveled from Portland to Boston on a homemade chariot driven by three dozen yoked peahens. In doing so, he unknowingly broke a Guinness world record.

#8 Jeff Green- After arriving in Boston and tasting New England clam chowder for the first time, Jeff is really curious what that "Oklahoma City clam chowder" was made out of.

#30 Troy Murphy- A clause in Troy's contract stipulates that he be permitted to miss any Friday games that coincide with the release of a new Nicolas Cage film.

#7 Jermaine O'Neal- Now that they spend a lot of time together, Jermaine has finally confessed to teammate Shaquille O'Neal that he spent the better part of the late '90s and early '00s making low-budget rip-offs of Shaq's films. As retribution, Jermaine gave Shaquille signed copies of Shazaam, Brass, and Green Chips.

#9 Rajon Rondo- A recent survey of NBA personnel revealed that Rajon is the league's only oviparous player.

Stranger: hello
You: hi
Stranger: whats your name ?
You: nenad
Stranger: from where are you ?
You: serbia, formerly yugoslavia
Stranger: oh :)
Stranger: did you see the super moon there ?
You: well, i live in boston now, but i saw the super moon here
Stranger: niice :)
You: it was really easy to see because i'm quite tall
You: i threw a chair at it
Stranger: haha :DD
You: i was once voted serbia's third most eligible bachelor
Stranger: that's a lie
You: no, i swear
Stranger: proove it :D
You: how about i just throw a chair at you
Stranger: ok, try your best
You: ok
You: did it hit you?
Stranger: nope
Stranger: not even a little bit :D
You: shit
You: i really need to work on my accuracy
Stranger: how old are you? :D
You: 27
Stranger: youre and old man
You: yeah, and i'm balding pretty severely
Stranger: poor guy
You: it's no big deal
You: i'm really rich and my wife is pretty cute
Stranger: so, what are you doing here then ?
You: on omegle?
You: bored i guess. lonely on the road. i'm in new york at the moment.
Stranger: you said boston
You: i live in boston these days
You: but i'm visiting new york
You: i was just in new orleans on saturday
Stranger: so, what your doing in new york then ? :DD
You: playing basketball
You: well, not at the moment
You: but later this evening
Stranger: :D
You: yeah, i'm looking forward to it
Stranger: nice..
Your conversational partner has disconnected.

Q: What's green and white and black all over?

A: The Celtics' away jerseys. Well, those alternate away jerseys they've been wearing occasionally since like '05. The normal away ones are just green and white, I think. I like that green. It's sort of a forest green, or maybe a Hooker's green. Very rich. Fit for any season, too. 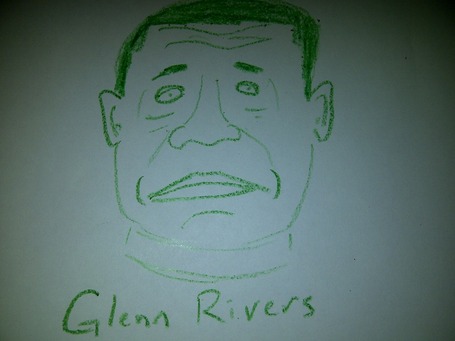 And now you know about the Celtics. Game thread coming soon.