Around the time of The Trade, the questions surrounding Chauncey Billups were about his ability to push the ball in Mike D'Antoni's offense given his age and his ability to execute the pick-and-roll effectively. Considering Denver played at one of the fastest paces in the league, it was easy to dismiss the issue of speed. The pick-and-roll was still an uncertainty, though. Was he more of a post-up player? An isolation scorer?

A look at the splits in Synergy shows Billups' production on the PnR taking a nosedive since the trade. Two things jump out immediately. First is that he's doubled the number of PnR he runs under D'Antoni. Even with all the generalities we make about the offense - about its bread and butter high PnR - this is still a bit of a shock. Now imagine Billups' reaction to being placed in completely different scoring situations. Second, the drop in points per possession is an obscene 30%. He went from ranking 6th in the league in Denver to 132nd in New York. In fact, it's Billups' lowest point production of any other scoring scenario. Think about that. Billups spends nearly 40% of his possessions scoring at his worst rate.

Sebastian Pruiti explored the best PnR ball handlers in the league in the offseason looking at shooting percentages and individual points per possession (PPP). He found that Billups had the second highest PPP despite ranking only 15th in shooting percentage from 10-23 feet, concluding that he gets his points by attacking the rim. One problem since the trade is that he can't find lanes to get there. Last night against the Celtics proved to be a prime example.

It naturally tends to be an issue of defensive strategy. In the following clips, Billups is allowed to come off the screens unfettered, opening up scoring opportunities for his teammates and himself.

Billups maintains his dribble off the picks as the roll defender sags off him. The room he gets to operate leads to penetration in the paint and a stepback three. 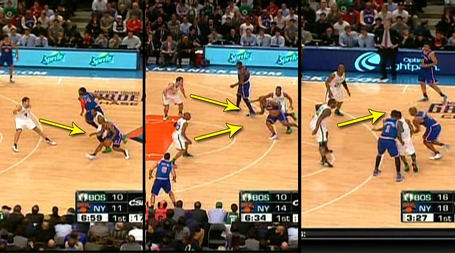 Kevin Garnett is quickly assigned PnR duties, though, and Billups' struggles to attack the new defense.

KG hedges the screen hard, pushing Billups way behind the three point line. Sometimes he'll pick up his dribble and take himself out of the play. Other times, he refuses to drive hard as his defender recovers, opting to dribble in place and wait for Amare Stoudemire to come free. The Celtics cover these things too well, though, and stop the roll. He just passes out to Fields over and over, forcing one of the team's least creative options to make plays. 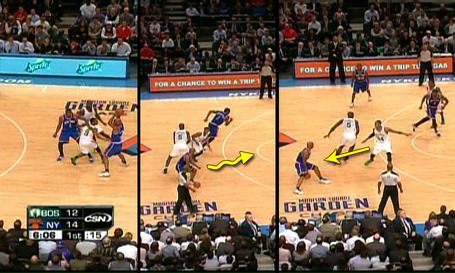 The Celtics even stuff the Knicks' favorite play before it develops.

I've already written about Dwight Howard shutting this play down by his lonesome but the Celtics play it differently. This time, Billups doesn't even receive a screen because Paul Pierce prevents Carmelo Anthony from setting it. 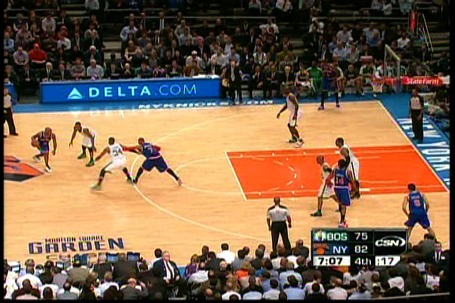 You see Pierce fronting Melo before he can set a pick, forcing Billups to swing it to Amar'e before he curls. KG never has to move because of this and he's automatically in position to meet Amar'e's drive. Plays busted, though the worst is clearly Boston turning them into fastbreak points.

The moment Billups is met with a hedge, he either picks up his dribble or simply dribbles in place and resets. He isn't turning the corner off these screens and driving through the lane which is what's most frustrating. Can he not push off his bad thigh at the moment? Or is this the PnR player he is? If he's going to limit his shot selection off screens to ill-advised threes, he's doing the defense a tremendous favor. He needs to find a way to get the defense to collapse on him to free up Amar'e's deadly roll.