Share All sharing options for: Pre-Game Reconnaissance: Knicks at Bobcats- 3/26/11

Bobcats? I ain't scared of no Bobcats.

- HoopData's down right now, but the Bobcats' strengths and weaknesses kind of don't matter. The Knicks are going to do what they do regardless.

- Charlotte's doing what they can to catch the final playoff seed. Their season is not at all lost just yet.

- The Knicks swept a back-to-back with the 'Cats back in November, so that's cool.

Wassup with the Bobcats!?

From Ben Swanson, a.k.a Cardboard Gerald, a.k.a. the cool dog (cats aren't the only cool animals. That's racist.) behind Rufus on Fire:

Without Stephen Jackson and Tyrus Thomas, the Bobcats have a very small margin of error in just about any game, considering their offensive firepower is already pretty weak. To compensate, Charlotte has to get by on effort and smart, controlled play by limiting turnovers and getting good, open looks on offense. The offense mostly revolves around D.J. Augustin, Gerald Henderson, Shaun Livingston and D.J. White. Augustin has been inconsistent, both with his shooting and passing. Henderson has been more solid and is going under the radar for the most part. He's becoming a shut-down defender but is still developing his offense. Look for him to get most of his looks coming off screens, curls near the elbow and cuts to the rim. His athleticism makes him a threat at the hoop but despite his strong midrange jumper, he is really weak from long distance. Livingston can be really scary for defenses because his height advantage and pull-up jumper can be nearly unstoppable. And combined with that, he has a really diverse offense, utilizing his terrific skills in the post, good passing and still-great athletic ability in spite of his injuries that everyone knows of. Often times I think he's unequivocally better than Augustin. But I acknowledge I may have some biases in favor of Liv. D.J. White is undoubtedly going to make Knicks fans frustrated tonight - especially because he's a "Who did what?!?" kind of guy. Though he'll probably come off the bench behind Boris Diaw, he rebounds a lot better and many fans would rather see him start over Diaw. He's a high-energy type of guy and he has a nice spot-up jump shot. If Stoudemire or whoever leaves him open from 15 feet, they will probably regret it.

I'm sure you're wondering "If this guy's so great, what about Diaw?". Well, Diaw has definitely been disappointing. For a guy with such a fantastic skill set, his effort is saddening. Bobcats coach Paul Silas feels the same way. The other night against the Pacers Diaw took zero shots in 24 minutes. Silas pulled him. You see, the Bobcats need Diaw to be more aggressive and taking shots. His range stretches opposing defenses and he actually can back his defender down in the post. His baby hook and wizardry (I'm probably overstating it, but that's the word I'll use) with a layup can boggle the mind, but what's really the conundrum fans and coaches is his unwillingness to take shots.

Kwame Brown is also a wild card. His bad hands show up every night. Always. I'd bet my life on it. I'd bet your life on it. He'll bobble easy passes in the paint and rebounds. But through Silas' and Charles Oakley's tutelage, Kwame's rebounding pretty well and he's become unafraid to take shots, which scares many fans, even when they go down. When he takes jump shots, that's when I cringe most. But if you don't watch out, he'll drop a double-double.

The good thing about playing without Stephen Jackson is that the Bobcats are forced to completely abandon any isolation game. Instead, they have to rely on teamwork and effective ball movement. They will try to get into transition as much as they can, but their game is still pretty slow. If Augustin or Henderson or one of the guys I mentioned in the first graf is off and not scoring, it's hard to imagine them beating anyone with an above-average up-tempo offense. Someone would have to step up in a big way to keep us in the game. Defensively, the Bobcats are mediocre but if they work hard they can make up for their weaknesses. Augustin runs through screens like you or I run through brick walls and even though he's a quick point guard, he can be beat with a quick first step. However, Livingston will usually be brought off the bench to stop the bleeding. Diaw is also an underrated defender. On isos and in the post, Diaw can defend pretty well, but on pick and rolls he can be taken advantage of. Kwame Brown is also pretty weak on the PnR. He seems to always make terrible decisions. I'm sure you want to know about the SF considering who guards Carmelo will be something to know. Sans Jack, this is their biggest hole (aside: I WANT DERRICK BROWN BACK. YOU'RE NOT EVEN USING HIM). Time at the SF will be split up between Dominic McGuire and Dante Cunningham, I'm fairly certain (though Silas switches things up a lot). McGuire probably gets the start for his defensive advantages over Cunningham. He's another high-energy guy who can rebound. His defense is pretty decent though he can be mistake-prone. Cunningham has some trouble with lateral quickness but is very long and athletic. I wouldn't worry about Melo's defense on McGuire who has yet to meet a shot he doesn't like but Cunningham has a decent jumper and is able to finish at the rim.

#33 Matt Carroll- After watching the movie Waiting, Matt repeatedly tried to implement the "Penis Showing Game" in the Charlotte locker room, but it amounted to Matt just showing people his dick a lot and nobody else playing along.

#44 Dante Cunningham- Because of an immune system that was designed and implemented by Villanova grad students, Dante has not been sick once since college. Not once. Dante could eat an entire trash can of rotten, fly-infested food without so much as sniffling.

#13 Gerald Henderson- Gerald's first NBA paycheck went to an outfit composed an entirely of velvet. It had the usuals-- velvet jacket, velvet pants, velvet boxers, socks and undershirt-- plus some hard-to-find extras like a velvet belt, velvet wallet, velvet-framed spectacles, and velvet shoe laces. He wore a velvet brassiere, not because he needed it, but because he found one that fit him nicely.

#1 Stephen Jackson- Stephen demands that all of his meals be melted down, then pressed into flat, elastic bands and rolled onto a thin sheet of waxed paper, a la Fruit By The Foot. He's baffled that other people don't do this.

#41 Garrett Temple- Garrett has been promised that, should the Bobcats make the playoffs, he will be allowed to compose and broadcast a "playoff pump-up jam for the ages" (his words) on his clarinet.

If Boris Diaw was actually a Bobcat!

Oh, this man Boris, dude. This man played basketball on my team in Charlotte, and he just made farts all the time. It is okay when people make farts, I think. I make farts sometimes, like when I eat too much macaroni or macaroni and cheese or something, then I will fart. But this man Boris just makes smelly farts at whatever time it is. I do not know what he eats, but I think he probably eats too much macaroni, like maybe he lives next to a Macaroni Grill or something. The farts this man makes smell like a butt or some stool. He makes them on planes and even while he plays basketball sometimes. I am glad that I do not have to smell this man and his farts anymore. 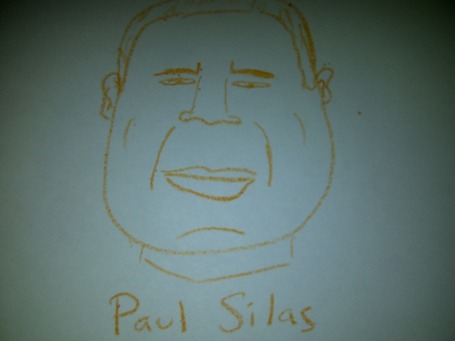 And now you know about the Bobcats.