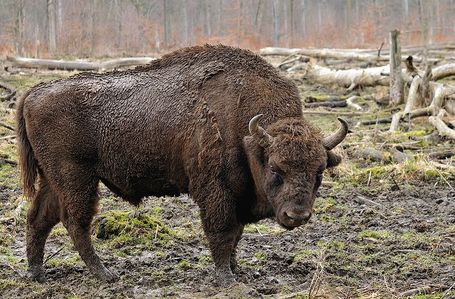 Good day, webdings. Before the Knicks take on the Magic this evening, let's page through some links. How about it?

- The wisent is the European counterpart of the American bison, and it's the only other bison species left on the planet. It's not quite as ridiculous looking as our bison bro.

- The Knicks held their first morning shootaround in quite some time just now. Should be interesting to see how they look to open tonight's game.

- In a sentiment that I've heard here as well, Jamie O'Grady suggests that Mike D'Antoni should channel Norman Dale. I say Coach Carter.

- Landry Fields and Shawne Williams get some love from Zach Lowe's "Jodie Meeks All-Stars" which is, alas, not a team of NBA players with girls' names.

- Mike Kurylo takes an early look at how Carmelo Anthony's teammates are performing in his presence. It's not going to surprise you.

- Two assessments of the present and future of the Knick roster from Mr. Fish and Knicks Fan Dan.

- Alan Hahn got a whole bunch of quotes from Mike D'Antoni and Chauncey Billups to illuminate just how mixed up and frustrated the Knicks are right now.

- A li'l weekend recap I wrote for NYMag.

- Pretty hefty line from Donnie Walsh: "We were missing pieces before the trade. We're still missing the same pieces."

- Update: via Evan Dunlap, the Magic will be depleted by injuries tonight.

That's all for now, my friends. Tune in later for another savage game thread!