Share All sharing options for: Pre-Game Reconnaissance: Knicks vs. Jazz- 3/7/11

What? Jazz? Huh? What is this?

- The Jazz have won just two of their last ten games and they're probably pretty sad about that.

- Utah is worst in the league in Opposing Free Throw Rate, so look for Amar'e Stoudemire, Carmelo Anthony, and Chauncey Billups (if he's back) to draw some fouls by attacking the rim.

- Nearly everybody on the Jazz is injured. More on that in the next bit.

- The last time these two teams met was one of my least favorite games of the year. Nearly every Knick got into foul trouble, there was no continuity, and a pretty excellent offensive performance by the Jazz wasted Shawne Williams's career night. That was a very different Utah team, though, and these are some very different Knicks.

Wassup with the Jazz!?

From Basketball John of the terrific SLC Dunk:

The Jazz may have just enough players tonight to meet the minimum roster requirement.  They'll be without Mehmet Okur, Francisco Elson, Kyrylo Fesenko, and Ronnie Price.  Andrei Kirilenko and Paul Millsap are both game-time decisions.  The Jazz can get by without and of the previous four not playing as they're not in the regular rotation anyway.  But with Millsap and/or AK out, the Jazz will be hurting.

The team has played hard since Sloan resigned and Deron Williams was traded but they haven't been able to close out close games in the fourth quarter.  It took them an overtime session to dispatch the Kings who were without Tyreke Evans.  The talent is there but they're scrambling to find an identity and make a push for the playoffs.

The most consistent players we've had this season from start until now have been Al Jefferson and Paul Millsap.  Al has been particularly hot as of late, shooting nearly 55% while putting up 23 & 10 for the past month.  Millsap has been putting up nearly the same numbers at 19 & 9.

Devin Harris has come in and nearly replaced the numbers that Deron Williams had this season for the Jazz.  That's a bit surprising.  Given that it's only been a handful of games, we'll see if he can keep up the pace.

Other than that, everyone else has been streaks.  CJ Miles is having one of his worst seasons shooting the ball but can catch fire on any given night.  Raja Bell has been up and down as well.

The offense hasn't been an issue for the Jazz the past two months.  They've been a sieve on the defensive end, primarily on the perimeter where they're giving up 40% from the arc.  Against a team like the Knicks, this scares me a lot.

I expect a high-scoring game and it will likely come down to whoever can muster consecutive stops down the stretch.

#20 Gordon Hayward- Gordon really doesn't mind playing under 15 minutes a game as long as the Utah staff provides him with enough towels and seat cushions to build a fort in which to do activities under the bench.

#25 Al Jefferson- After seeing the movie Bicentennial Man on Blu-Ray, Al decided that he would undergo a transformation of his own. He is gradually undergoing surgeries to replace parts of his body with twigs, branches, leaves, and fragments of bark. By the year 2050, Al expects to be a full-grown maple tree.

#47 Andrei Kirilenko- Andrei emerged from his mother's womb as a fully formed adult head (with hair and, oddly enough, hair gel) without an adjoining body. By the age of three, the head had sprouted a tiny fetal body. By six, the body was just strong enough to support the weight of the head and walk around, albeit with a lot of wobbling and stumbling. It wasn't until puberty that Andrei bore even a vague resemblance to a normally proportioned human.

#34 C.J. Miles- When the Jazz book hotels for their road trips, C.J. demands a separate bed for his imaginary friend, Ethan.

#17 Ronnie Price- Ronnie doesn't see what the issue is with members of the Heat crying after a tough loss. Ronnie cries after every made jumper because he regrets causing pain to the net.

Oh, this man Raja Bell. I was with this man in Charlotte last year and he was really gross. I saw this man Raja Bell one time and he was scrunching his nose up a lot, you know, like this [scrunches nose]. And then he got to sniffling and snorting and then after that he asked if I had a Kleenex or even some paper towels and I didn't have any so he just went and he stuck his pinky finger right up in his nose. This man dug up in his nose with his finger and then when he took his finger out it had a really big green snot booger on it. Like probably as big as a pea or a kernel of corn. And then I don't know if this man knew I was looking because he took his pinky and stuck it right in his mouth and just sucked on it like it was a ice pop or a fudge popsicle or something. And then when he took his finger out of his mouth there was no more booger, so I think he probably ate it. Raja Bell, man. This man is gross. 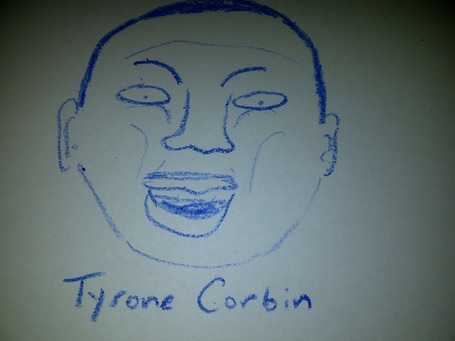 And now you know about Jazz! Game thread coming later.