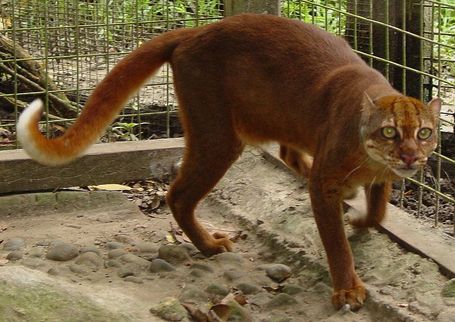 Good afternoon, croupiers. Here are some links to enjoy with your mid-day biscuits.

- Bay cats, yo. These cats are rare. They only live in Borneo (in the wild) and they are WEIRD looking.

- The big basketblogosphere news of the day is that FreeDarko is no more. If you're a fan, that post is a long, excellent tribute to the collective by all the folks that have ever contributed to it. I never got around to contributing to FD, but will say that it and Billups were among the first and best basketball blogs I ever read. In fact, I'd say FreeDarko is one of my favorite things to ever be on the internet. It's up there with Ask Jeeves for Kids and this. It was a wonderful collective of brilliant, limitless writers who, among other things, perfectly articulated the things I'd loved about basketball since I was very little. If you're unfamiliar, I highly suggest you comb through the archives (though my favorite thing ever, the Style Guides, can only be found in the first book now), and pick up both books. Farewell to FreeDarko, and the very best to each of its parts as they drift in various directions.

- Um...other things. Alan Hahn catches Donnie Walsh gazing out over the horizon and also dismissing rumors that he wants to return to the Pacers. Also, Alan's having a party tomorrow night.

- As Trey Kerby notes, Carmelo Anthony kind of called his shot last night. That, or he just has a firm grasp on how basketball works.

- Melo's going to be on Letterman, by the way.

- Come for the recap, stay for the minutes analysis of Landry Fields vs. Toney Douglas over at Bandwagon Knick.

- Kelly Dwyer on Amar'e Stoudemire's expected improvement in the playoffs.

- Gem of a headline.