Ronny Turiaf's head will start at center in Game 1.

Share All sharing options for: Ronny Turiaf's head will start at center in Game 1.

Well, his whole body will presumably start at center, but check the following from Marc Berman:

Knicks coach Mike D'Antoni said Ronny Turiaf will be his starting center for Game 1, not Shelden Williams, who sprained his ankle last night in the fourth quarter, coming down on a Celtic player's foot.

Turiaf, who's had an injury-prone season, missing 19 games, started against Chicago on Tuesday and last night versus Boston.

D'Antoni said the matchups were good for Turiaf, but that things could change if Shaquille O'Neal gets healthy for Boston.

The Knicks don't really have a legit starting center on the roster.

"We'll have a three-headed center," D'Antoni said, adding Jared Jeffries to the mix.

Despite previous indications that it'd be She-Will, Turiaf's getting the go and I have no problem with that. (Coach D'Antoni, I'm sure, awaited my approval. Thumbs up, Pringles.) Turiaf's as big as Knick big men get, he put in a great performance in the last Knicks-Celtics match-up, and he surprisingly isn't the most recent center to sprain his ankle (although Shelden seems to be okay). The "three-headed center" thing suggests to me that D'Antoni will ride the hot hand, match what the Celtics are offering, and try to evenly distribute fouls. Turiaf probably makes the most sense on Shaq (should he play) with Williams spelling him off the bench. Jeffries could be useful against smaller line-ups, or if somebody needs to be elbowed in the face. 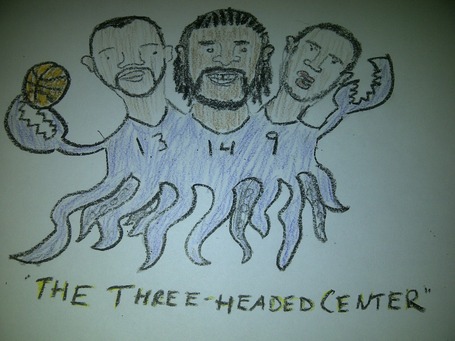 The Celtics better watch themselves.