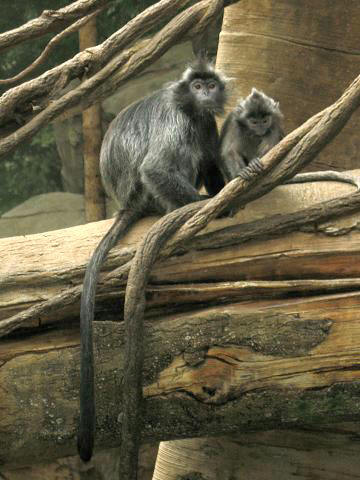 Good day, tycoons. I'm, uh, kind of done with this pre-playoff build-up. I'm ready for the actual thing to start. In the meantime, let's link.

- Lutungs are Asian leaf monkeys with very nice fur. You can usually find them at the Bronx Zoo (where that photo was taken, by the way) at Jungle World.

- One thing I've noticed to a degree that I was considering writing an entire post about it is that the Knicks sound excited and self-assured, but are careful to respect the Celtics. Even somebody like Amar'e Stoudemire, who's previously tried to intimidate Al Horford and disparaged Pau Gasol, is confident yet reverent:

"Those guys are champions. They know how to play in the playoffs,'' Stoudemire said. "It's going to be a great experience for us. I think we've got the right mindset to give it back. It's going to be a tough series, but we're ready to go.''

Hahn himself says that the Knicks are being careful not to rile up the C's before the series even starts. That's wise, I think. Best not to engage in a war of words. I'm thankful right now that Quentin Richardson is no longer a Knick.

- Lots of words from the opponent, via Marc Berman.

- Will Leitch simulated Knicks-Celtics on his PS3, thereby confirming that he is 9 years old. I bet he's got no 2k game whatsoever. THIS IS A CHALLENGE, LEITCH. (Also, the result was somewhat foreboding.)

- Will also interviewed Landry Fields. It's a good 'un.

- Ronny Turiaf speaks on the possibility of going face-naked for the playoffs. It's wonderful that this has become a big story.

- Chattin' with Bill Walker about facin' his old team.

- Discussin' the importance of Jared Jeffries, as well as the possibility that he defends Rajon Rondo.

- Mike Kurylo, speaking in regard to an article in AM NY, (for which I was also interviewed, though my quote isn't as cool) reminds us that the Knicks are sort of a mish-mash of parts.

Those are the links for the moment. I'm gettin' restless, y'all. Enjoy your afternoons and evenings!