The day has come! Wait, who are the Knicks playing?

A word from Celtics Blog!

3 Things You Probably Didn't Know About The Celtics

1. All the problems the Celtics have can be traced back to the Kendrick Perkins trade.  We don't have a defensive presence in the paint.  We don't have the same swagger.  We don't have anyone that can set monster (moving) picks to free Ray Allen.  We don't have anyone to scowl and pick up technicals for no apparent reason.  Jeff Green isn't allowed to sit at the cool kids table in the cafeteria at lunch.  Rondo cries himself to sleep at night and during games looks over at the bench just hoping to see Kendrick as if it was all just a bad dream.  Doc de-friended Danny on Facebook.  The NFL lockout happened because Goodell is a big Perkins fan and doesn't see the point in sports if he can't root for him in Celtic green.  The Red Sox are 2-9 since the Perkins trade; no one denies this!  (Note: some of this was sarcastic, I'll let you decide how much of it isn't)

2. The team has actually been kind of lucky with injuries this year.  Sure the O'Neal brothers have missed most of the season and Delonte West has been outfitted with yellow reflective tape and blinking caution lights, and at times we've had to have assistant coaches step in to scrimmage so we'd have 10 bodies in practice, but when you look at Rajon Rondo, Ray Allen, Paul Pierce, Kevin Garnett, and Big Baby, they've all played most of the games this year - which is a big improvement from last year.  By the way, after that run-on-sentence my fingers might need to go on the inactive list.

3. Paul Pierce loves playing the Knicks, especially in MSG.  According to his official website, Paul is tied with Kobe for the most 30+ point games in MSG (active players only).  Maybe he just really likes playing in places called "the Garden."

3 Bold Predictions For This Series

1. The Celtics will drop one of the first two home games, causing the fans and local media to froth at the mouth sharpen their pitchforks in preparation of storming Danny Ainge's door.  Of course then the Celtics will win the next 3 and take the series in 5 and everyone will be given the "I told you so" look by Danny.  Note: this scene will likely be repeated later in the playoffs.

2. At some point, Ray Allen is going to nail a dagger 3 pointer, turn to where Spike Lee is sitting, and make the choke sign as a tip of the hat to Reggie Miller.  Ray's mom (Gloria) will then console Spike while laughing at him at the same time.

3. There will be one game where both teams score over 100 points and another game where both score under 85 points.  Oddly the Celtics will win the shootout and the Knicks will win the ugly slug-fest.  Bonus prediction: Nenad Krstic will get into a fight with Ronny Turiaf during the low scoring game but no chairs will be thrown and Jermaine O'Neal promises not to fight any fans (because according to my other predictions, it will be a home game).

#20 Ray Allen- Ray was never actually declared "off the clock" on the set of He Got Game, so if Spike Lee, sitting courtside, tells him to miss a shot, he is contractually obligated to do so.

#45 Carlos Arroyo- All of Carlos's facial features are painted on.

#0 Avery Bradley- Avery invited all of his teammates to play paintball on Sunday night. Much to his chagrin, all of them declined except for Von Wafer, who offered to bring his own gun and armor.

#11 Glen Davis- After a game, most of the Celtics take showers. Glen heads into an auxiliary room to get hosed down by the Boston training staff.

#5 Kevin Garnett- To motivate and send a message to his teammates, Kevin has been periodically slipping on his championship ring and punching them in their faces.

#4 Nenad Krstic- As the big man who replaced Kendrick Perkins, Nenad is now saddled with the responsibility of giving Rajon Rondo piggyback rides everywhere. He literally wears a saddle, like Kendrick did.

#30 Troy Murphy- When Troy goes to the pool, he uses golf tees as nose plugs.

#36 Shaquille O'Neal- Shaquille recently purchased a Razor scooter, only to discover that he occupied too wide a berth to ride the thing comfortably. Undeterred, Shaquille purchased a second scooter and attempted to ride while distributing his weight between the two. The endeavor proved too difficult, as the scooters diverged and Shaquille tumbled to the pavement, straining his calf in the process.

#77 Sasha Pavlovic- Sasha feels as if he's under undue pressure to make three-pointers because of Shaquille O'Neal's "Shaqovic" comments from a few years ago. This is somewhat amusing, since Shaq has never heard of Sasha, doesn't know his name, and isn't aware that the two are teammates.

#34 Paul Pierce- Paul's patchy, syphilitic facial hair is actually a "playoff beard" that he's been working on all year.

#9 Rajon Rondo- Rajon plays dominoes with a group of stray cats every Sunday night, so he tries to avoid drawing or committing fouls in Sunday games in order to get home quickly.

#12 Von Wafer- Von gets a lot of mail from small European children that isn't meant for him. He recently learned that this is because he shares a name with the Austrian version of Cookie Monster.

#13 Delonte West- The Celtics considered shaving their heads for the postseason, but opted out when Delonte quietly alerted the team captains to the fact that his scalp is covered in nipples.

Dan: We're going to have our hands full with Rajon Rondo in this series.

Dan: Well, not literally, but I think he's the most important guy to keep track of. If the Celtics get open looks and easy inside attempts, it'll probably be because our guards aren't keeping Rondo in front of them.

Dan: Chauncey gets the start, obviously, and I think he's getting pretty pumped for this match-up. I think he's smart enough and has done enough homework to give Rondo the right amount of space and predict where he's going.

Dan: Toney will come off the bench and try to stay in front of him with quickness. Hopefully, he can force some turnovers as well.

Dan: If all else fails, we can get creative and throw Jared Jeffries at him.

Dan: That's a hateful thing to say. Jared's a decent guy and he tries hard.

Dan: Wait, do you even want us to win?

Dan: That doesn't surprise me. Why are you even on the payroll, then?

Boston Science Museum: There's lots of great popcorn and snacks under the seats in the IMAX theater, but bring a flashlight or something.

New England Aquarium: I liked all the fishes, but they wouldn't let me swim in the same pool as the penguins. Racists.

Quincy Market: Unbelievable spread on the floor here. People drop parts of sandwiches and baked goods, and all sorts of delicious seafoods. The rats here aren't hostile, but they have weird accents.

U.S.S. Constitution: Lame. The boat thing was boring, and when I jumped into the water to check out these two ducks, some guy jumped in after me and pulled me all the way to the shore and tried to kiss me on my mouth.

Freedom Trail: This baby I was talking to said he preferred to walk, so I switched places with him in his stroller and his mom pushed me for the length of the trail and fed me raisins. This is the spot to visit.

Who Will Win the Knicks-Celtics Series, and in How Many Games!?

Smarterchild: "My brain is retired but watch some cool videos! Send am IM to GossipinGabby and Type VIDEO!" (Who knew?)

Wolfram Alpha: "Basketball: Development of this topic is under investigation..."

Here is a picture of the Larry O'Brien Trophy! 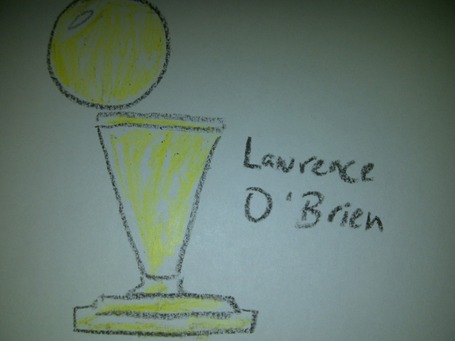