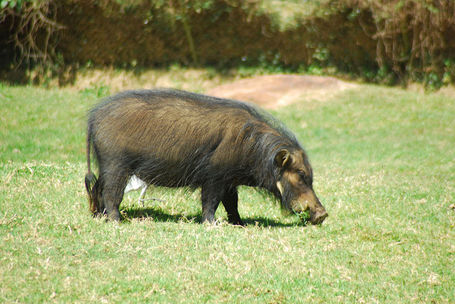 Good Monday, marionettes. I was considering giving this post some sort of cute name, like "debriefing" or something, but I just can't stray from these mammals. I love 'em too much. I'm re-watching Knicks-Celtics as I write this, sick puppy that I am, so today's links will include my idle grumblings on the ills of Game One and my hopes for Game Two. (Do you guys capitalize "Game One" and "Game Two"? I do, because I think playoff games are pretty proper. Wait, should I capitalize "Playoff'?)

- Giant Forest Hogs are giant hogs that live in the forest. What?

- Will Leitch gives us "7 Things to Be Happy About" from last night's game. My favorite:

Everyone on the team is now a playoff veteran. When you really break it down ... the Knicks lost last night's game because the Celtics have played dozens of playoff games together, and the Knicks haven't. The Celtics knew what to do down the stretch because they've done it so many times. So, uh, now the Knicks have one more game of playoff experience than they did 24 hours ago. Hey, it's something. Maybe they'll learn to step over Garnett's outstretched foot now, for one thing.

Will's being a little silly, but last night's experience wasn't nothing. We saw some jitters from guys we'd like to contribute, like Landry Fields and Toney Douglas. Both looked completely out of sorts on their first few attempts (which, for Fields, were also his last few). With luck, they'll be a little less rattled at the outset tomorrow. Every possession counts, you know.

- Strange little thing from last night: As Dan Devine pointed out, Anthony Carter claimed the Knicks weren't prepared for the inbound alley-oop to Kevin Garnett. But, um...they probably should have been. I mean, this guy knew about it, and he isn't even employed by the Knicks (quite the opposite).

- A few other recaps from Knicks blogs that I enjoyed. (Well, not enjoyed...but appreciated?)

- I still haven't read this, but I'm imagining that this GQ piece on Stephon Marbury is pretty good. It's pretty much guaranteed to be.

- Something to think about: Some of our friends from Sactown Royalty would like to organize a rally outside of the NBA Headquarters in New York. (The Kings, of course, are on the precipice of moving to Anaheim). If you're interested in participating or helping to drum up support, alex.kramers@gmail.com is the man to email.

Some stuff from re-watching the game:

- Much is made of Amar'e Stoudemire not getting the touches down the stretch, and for good reason. He was hot as hell. To be fair, though, Amar'e got the ball curling toward the middle with just over 2 minutes left and committed a charge (while kicking out to Toney Douglas, who drained a three that would have put the Knicks up 7. [Vomits]). They ran another curl play for him on the next possession, but Melo's screen wasn't sturdy enough and Amar'e couldn't get open.

- Even at the expense of pushing the pace, Rajon Rondo needs to be boxed out. I said this in the recap, but Chauncey Billups made the mistake (well, he may have been instructed to do this) of releasing on the shot while Rondo lingered around the free throw line to snaggle long rebounds a few times. To be fair, certain bounces might give the Knicks a good fast break opportunity the other way in that scenario, but we'd probably prefer that possession just be secured.

- Amar'e Stoudemire can blow right by Kevin Garnett. Seriously. Whenever he wants. It's just a matter of picking spots and not dribbling directly into help defense (or at least making the appropriate pass when doing so).

- Pretty much every time Ronny Turiaf set a screen in the first half, good things happened. They ran some great plays with Amar'e on the strong side or at least within passing distance of the ball-handler, and it never ended in anything less than a foul. The Celtics stepped up their defense on this particular play in the second half by hedging much harder on the ballhandler. Still, it would have been cool to see them run that play (with Amar'e or Melo as a decoy. That's crucial) more often in the second half, and not with Jared Jeffries. I'd even give Shelden Williams a run in that set. He's shown that he can draw fouls and pop out to hit a mid-range J.

- Most of Jermaine O'Neal's offensive rebounds were Amar'e Stoudemire's fault. Amar'e kept getting wedged wayyy under the basket. Sometimes it was because O'Neal got a bit handsy, but usually it was just due to Stoudemire's tendency to go limp and leave his hands by his sides on the defensive glass. O'Neal tied the game with just over a minute to play because of this very tendency.

- Speaking of which, Turiaf played stellar defense on two late possessions in which he and Carmelo Anthony were "forced" to switch (Melo's switch threshold is pretty low). On one, Pierce hit an incredibly difficult fall-away. On another, he missed a fall-away with Turiaf's hand in his face (which, as mentioned above, O'Neal put back). Again, if the Knicks won, I might have bought a Ronny Turiaf jersey last night.

That is all. WIN GAME TWO.