Share All sharing options for: Pre-Game Reconnaissance: Knicks vs. Raptors- 4/5/11

Raptors, eh? I heard they can open doors.

- The Raptors suck, they suck on the road, and they've sucked against the Knicks this season. They did just beat the Magic, though, and they have exactly the kind of hyper-athletic frontcourt that could outwork the Knicks and make easy plays inside. Reggie Evans, Amir Johnson, Ed Davis...these are exactly the kind of guys that could kill New York. Tonight won't be easy.

- Jared Zwerling notes that that hustle and rebounding ability is exactly what upset the Magic the other night.

- The Raps are playing without Jose Calderon and Andrea Bargnani these days, so that's good.

Wassup with the Raptors!?

From Adam Francis of Raptors HQ:

The team has been terrible for sure with only 21 wins, but is no lock unfortunately for a top 3 lottery pick and therefore what looks to be a true impact player, has a coach with an option on his contract and a GM that needs to make said coaching decision without having a firm commitment from the organization himself!

Add on the possible sale of the team by the current majority ownership group, a bevy of "intriguing" yet completely unproven young players, and a slew of injuries that rivalled the Milwaukee Bucks' situation and you've got a lot more questions after the season concludes than answers.

DeMar DeRozan and Amir Johnson have taken steps forward in terms of their respective games, but is either a starting calibre player on a contending team?

It's hard to say at this point.

And while Ed Davis has been a pleasant surprise, and players like Jerryd Bayless and James Johnson have shown flashes, other players like Sonny Weems and Linas Kleiza who were expected to offer larger contributions, have indeed disappointed.

And we won't even get into the trials and tribulations of Andrea Bargnani.

The bottom line is that the future of this team suddenly looks to be as murky as it's ever been, and it may take a few seasons before fans can truly get a clear idea of the direction its headed, especially with the potential of an NBA work stoppage looming.

#50 Solomon Alabi- Solomon spends his time on the bench reading and reciting Kafka while wishing that Ed Davis and Amir Johnson would turn into insects.

#20 Leandro Barbosa- Leandro, if given time, will latch on to an opponent, insert his feeding tube deep into his skin, and gorge himself on man blood.

#5 Jerryd Bayless- Jerryd eschews Canadian currency for his own homemade "Bayle$$ Bucks", which are printed on paper napkins and emblazoned with an image of his face. So far, they've been rejected by everybody in Toronto except Alexis Ajinca, who happily accepts them as payment for his maid services.

#32 Ed Davis- Ed can name every type of spaniel, including the extinct ones.

#11 Linas Kleiza- When the Raptors visited London, Linas was forced to sign autographs and pose for pictures with several dozen Brits who were convinced they'd seen him in a Guy Ritchie film.

Stranger: how r u there
You: i am well. how are you?
Stranger: fine thx
Stranger: male here whats u there
You: i am andrea
Stranger: andrea is ur name ?
You: yes
Stranger: okay u can call me Eric
You: okay, eric
Stranger: is andrea a boys name or a girls
You: in this case, it is a boy's name.
You: i'm from italy. shit's crazy there.
Stranger: beijing here
You: that's cool. i didn't get to go there for the olympics. : (
Your conversational partner has disconnected.

A Starting Five of Non-Raptors!

If Jose Calderon was actually a velociraptor! 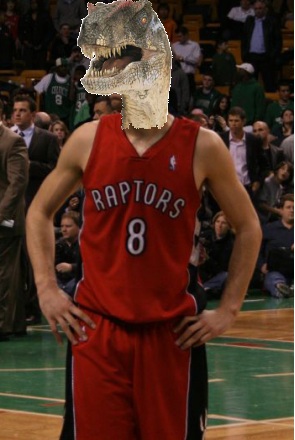 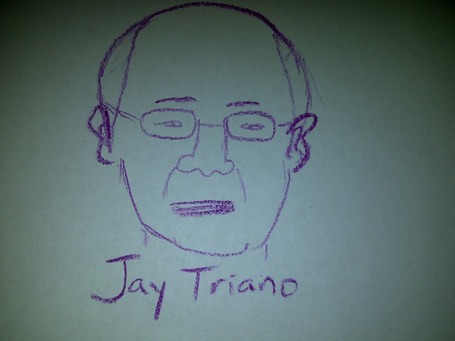 And now you know about Raptors!