Share All sharing options for: Pre-Game Reconnaissance: Knicks at 76ers- 4/6/11

Being named after a year is dumb, if you ask me.

- The Sixers had something going at the end of March, with a big win in Chicago and double-digit victories over the Rockets and Nets. They've lost their last two, though, including a defeat at the hands of the Celtics last night.

- The Knicks haven't played Philly since the trade, but they're 1-2 this season against Andre Iguodala and friends. They most recently split that home-and-home with them in early February.

Wassup with the Sixers!?

Since you guys last saw the Sixers, a few things have happened. And I'm not talking about my first period although perhaps I should be. We jumped you in the standings for a while and Lou Williams got hurt after making too many kick ass rap videos. And now you're caught up.

This is pretty much the penultimate game for the battle of the 6th seed, although the schedule says there's a few more, I'll just lump 'em together. I think the game favors the Sixers since the six seed was practically named for us, but it doesn't really matter because regardless of our scrum, we're playing one of Boston or Miami, who are both currently tied for the 2-spot. And we just got wiped by the C's, so at this point it's kind of whatever who we face in the first round.

The biggest thing the Sixers have going for them is that they are a team. In the same sense that Norman Dale made Hickory a real team when he got there, imagine Doug Collins as Gene Hackman and Eddie Jordan as a coked out version of Dennis Hopper. EJ's Sixers finished with 27 wins and a whole bunch of sour pusses last year. Doug's bunch are smiling, high-fiving, #showyourluv'in and camaraderie-ing like schoolgirls. It's pretty cool. We'll fully admit that the Sixers are a step behind the Knicks in terms of talent, but when it comes to teamness and coaching, the Brotherly Lovers have the edge.

With a playoff spot locked up, Iguodala and Brand hurting, Lou out maybe until next season, AND being on the second night of a back to back, expect a good chunk of minutes to go to the reserves. Brand inexplicably played 35 minutes last night in a 20 point loss to Boston, while Andre didn't look at all like himself and the imposter was a much less able basketball player. Evan Turner, at least last night, assumed the Lou-Will role off the bench of best scorer in the half court. But that will be less important against an up-and-down team like the Knicks than it was against the Celtics. Still, after his best game in the pros, we're hoping for another gem from The Villain vs. the Little 'Bockers.

I wish the very best of luck to you and let's promise that we'll both win our first round matchups because Miami and Boston S some major D. Jruth.

#22 Antonio Daniels- Upon arriving in Philadelphia, Antonio laid waste to one entire side of the locker room, strewing clothes, personal belongings, and luggage all over the floor and proclaiming that the eight lockers he'd vacated were now "Antonio's World". He's since designated one locker as a gameday dresser, one as a "playroom", one as a "sandwich parlor", one as a vegetable garden, one as a recording studio, two as moped parking spots, and one as a bathroom. His eight refugee teammates are now sharing lockers on the other side of the room.

#00 Spencer Hawes- Spencer demands that the Sixers personnel remove the crust from his sandwiches for him. He likes the crust, but claims to suffer from an anaphylactic allergy to crust. Philadelphia staff members have privately grumbled that the crust is actually just the slightly more cooked surface of the same bread matter, so the uneventful consuming of the middle parts disproves any supposed allergy, but they've decided to just play along.

#11 Jrue Holiday- Jrue spent the entire offseason waist-deep in the ball pit of a Philadelphia-area McDonald's. He played and chatted with kids occasionally, but mostly just hung out.

#9 Andre Iguodala- According to his family's Christmas cards, the plural of Andre's last name is "Iguodalae".

#5 Andres Nocioni- Andres's first name is the plural of Iguodala's. This is all very confusing.

#25 Darius Songaila- In anticipation of the lockout, Darius has already begun to write and rehearse a one-man stage production in which he portrays Martin Luther.

If Elton Brand was actually a 76er! 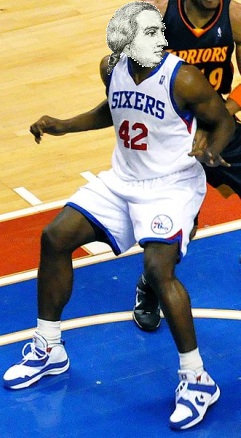 Philadelphia Mint: These two big guys threw me out of this place, but I didn't really care. None of the coins had chocolate in them anyway.

Independence Hall: This is the spot. I went on a tour and the tour guide was eating these Altoids and I asked him if I could have one and he said I could have the rest of them in exchange for me not trying to hold his hand anymore. What a bargain!

Citizens Bank Park: I took a tour here as well, and it was pretty fun. They took us into the locker room and I found a lot of sunflower seeds on the ground. Also, I finished Placido Polanco's sandwich for him.

The Liberty Bell: Not a fan. The bell smelled really old and there were all these pigeons around that ate all the good crumbs. 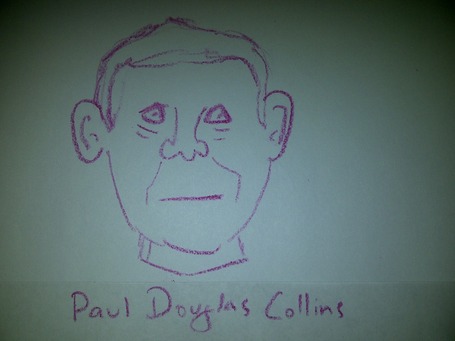 And now you know about the Sixers! Game thread later.