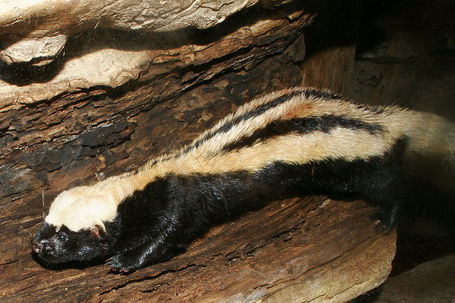 Good afternoon, pipers. Here are a few links I'd like to share whilst I watch Diary of a Wimpy Kid.

- Striped weasels. I hadn't heard of these snitches until today, but they seem alright. I like this:

According to African folklore if you cut off the nose of a weasel it will grow back two shades lighter in colour, however it will bring misfortune to your family and lead to a poor harvest. This myth gave birth to expression "A weasel's nose is not to be trifled with."

The same could be said of me.

- If you've got some time, your thing to read of the day is this piece by Yago Colas (the section entitled "Beautiful Monstrous") dissecting and appraising the Knicks-Heat rivalry of the '90s. If you haven't read Joey LItman's essay in the orange Free Darko book that he mentions, that's a gem as well. This stuff is cool, particularly considering the current state of things.

- This article by Steve Adamek has some noteworthy rotational and...schedular...stuff. Blueball of a headline, though.

- Oh, I started wearing my crown again! Forgot to mention that in the recap, but another thing that makes this win streak like the one in December is that I've been wearing my crown. Just like last time, I'll sport it 'til it runs out of luck. Might have to bring it tomorrow night!

- And hey! Tomorrow night! Looking forward to grinding with all of you! You're all still invited! Just email me! !

- Y'all on Twitterfolk have probably seen the #WinForGianna hashtag. If you don't know what that's all about, let the Magic Man Miranda, Dan explain. Anthony Donahue of TKB Radio has a sister, Gianna, and she's  battling brain cancer. Anthony, who is an excellent individual and looks cool in hats, invoked Gianna's name five games ago, adding a little something special to the Knicks-Magic contest, and it stuck. Five games later...well, would you look at that! Check out Dan's post to see lots of very kind people being very cool, not to mention an exceedingly brave girl.

- This article in the NYPost (pronounced NEE-post) by Mike Vaccaro discusses the rest 'em vs. play 'em conundrum and also includes Chauncey Billups calling us all "baby":

"If this were a playoff game," Billups said, smiling, "I’d have been out there, baby."

I guess that's it! Today was a quality day, not a quantity day, I suppose. I hope you're all having quality days! I look forward to meeting/seeing/goosing some of you tomorrow!