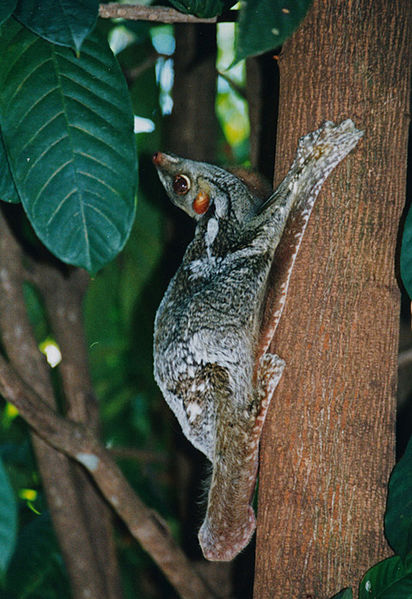 Good afternoon, parsons! I've been cutting my way through the forest in search of Knicks-related links, and have a returned with a few to share. Please don't devour them all at once. Take small bites. Savor them.

- Colugos are two species of Southeast Asian furry friends called "flying lemurs". They're not really lemurs, but they do have giant skin flaps with which they can pretty much fly from tree to tree. I WANT THAT.

- Knickerblogger's got some good stuff up these days: Here they are talking about the draft, and here's a great new piece on Landry Fields's rise, regression, and expectations for the future. Beware a Cedric Henderson reference.

- The Knicks don't have a coaching vacancy and that one guy hasn't expressed any interest in the Knicks, so I don't know what all this hubbub is about.

- This is a couple days old, but the good men at The Good Men Project spoke to Michael Ray Richardson, and not just about silly things like hats and frogs and whatnot.

- With these early, sort of cursory combines going on, Jared Zwerling has spoken to a few lesser-known draft prospects. The interviews are great. Here he is with Cory Joseph, Greg Smith, and Jamine "Greedy" Peterson (who might end up demanding too large a contract...WOCKA WOCKA WOCKA).

- Incidentally, viva morrison is pretty much my man for these "Know The Prospect" things, but if you can write and have got a prospect you'd like to write about, email me and we can discuss it. I've given up doing these myself because they pretty much amount to "this guy looks tall and I like his beard and here's a video".

- Whatever about Dwight Howard, but this bit from Alan Hahn on Donnie Walsh is interesting, and has been mentioned in a few different places:

From what I have heard from various sources, Walsh isn't as much angling for total control as he is for a more controlled environment for the players. Appearances with David Letterman and Regis are no big deal and it's not as much the crowds that gather around the court before games at MSG - the players actually like that because it creates a big-game buzz and atmosphere every night. It's the madness that exists elsewhere, such as in the post-game locker room at the Garden, where visitors are mixed in with members of the media to create an environment unlike any other in the league.

He also suggests that Carmelo Anthony might want to lose those...uh....giant skin flaps. Unless he intends to use them to fly, ya know.

That's it for now! There'll be a playoff thread up later, and maybe we'll even be up until 2 AM again. Until then, have a splendid day. Enjoy the weather, if there is weather to be enjoyed.