Delivered to New York in the same box as Carmelo Anthony, Chauncey Billups was the mitigating factor of a deal that depleted the Knicks of all its assets. Considered the third head of yet another a big three after some nifty dribbling and timely scoring, Burps immediately experienced just how quickly this city can turn on anyone after some erratic play. His anagram:

Fill in that blank however you wish because to evaluate someone playing on one leg is to judge a four course meal on the first bite. This was just an amuse-bouche.

While Raymond Felton warmed himself to the fan base by producing eerily similarly to Point Guards of Knicks Past, it's important to remember that he was given a short, affordable, trade-friendly contract for flexibility. That flexibility was key in obtaining another stud. He played himself into a steal of an acquisition, then regressed to a solid pickup. That's fine, and he's missed, but the point is he wasn't brought in for the long haul.

Billups assumed the same position of stopgap the minute he arrived but with the added bonus of championship experience and far better shooting accuracy. Still, given his age, there were questions about his ability to control this type of offense. Denver, as a team, was high-octane fun but they had springy legs in the backcourt to push the pace. All of New York's springy legs were casualties of the deal.

Sure enough the offense turned into a slow jam - still sexy but no longer frenzied, dance music. Billups' durability also became an issue but it wasn't simple wear and tear. He suffered a left thigh bruise (courtesy of Dwight Howard) so deep that it tickled the bone. After missing nearly two weeks of time, he came back only to see his production hit a similar kind of wall. With no explosion (vs how much he had left anyway) and little practice, Burps was limited to this dude who dribbled sans purpose and randomly launched shots like some kind of three-point Tourrette's but was somehow still the best point guard on the roster.

His playoff debut as a Knick? One game and out. That damn leg gave out again as he, uh, moved(?) toward the basket. Entirely dispiriting.

The backlash was swift. Somehow this - the Knicks' shortcomings, their lack of depth - was Billups' fault. The conversation switched from "Thank goodness he's here" to "What can he be traded for?" That's shortsighted. Billups is a fringe hall of famer that can't downplay a reputation he earned as a clutch shooter after one monumental championship run (though I doubt he actually wants to downplay it). His value can't be dismissed so quickly. And while there are legitimate concerns about the health of his left knee, he's a solid point guard for this team's ongoing transition.

On the surface, Billups performed as we've come to expect, shooting the ball accurately and scoring the way he's capable of doing. I highlight his free throw attempts because he topped double digit attempts in 6 of the 21 games he played for the Knicks, including a 20 FTA night the very game he sustained the thigh bruise. He's part of the reason the Knicks went from 28th in free throw rate in '09 - '10 to 11th in '10 - '11. And it's his free throw accuracy that bumps his true shooting percentage up over 60%. It's his accuracy of the non-free throw variety that became an issue in New York. 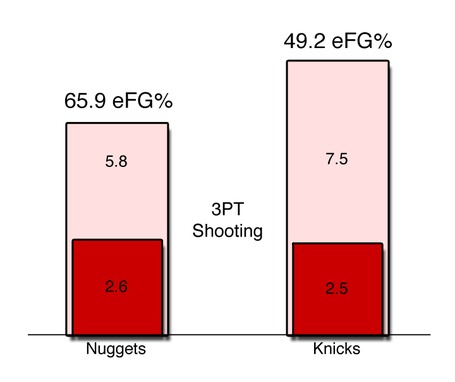 Billups didn't experience the same lift in three point percentage that Melo enjoyed under Mike D'Antoni. He attempted about two more threes per 40 minutes but converted about the same amount. His effective field goal percentage plummeted and he went from shooting 53.6 overall eFG% in Denver - the best in his career - to 48.3 eFG%. And the 7.5 3PA is so frequent that it places him second among point guards behind notorious chucker, Baron Davis, for most attempted per 40 minutes. Not surprisingly, threes made up 50% of Billups' total shots.

But while it was eye-opening to see Billups' highly questionable shot selection at times, the biggest concern we all had was his ability to play pick-and-roll basketball. It wasn't a big part of his game in Detroit or Denver. What's encouraging is that while he struggled to run it early on, the stats show that he finished the year strong. On March 22nd, Billups was scoring 0.69 points per possession as the PnR ball handler on 29.8% shooting and 20% 3FG% as a Knick. It was terrifying considering he spent 38.3% of his possessions in that scenario. By season's end, his numbers were back in line with his days in Denver.

Like his pick-and-roll game, the shooting will correct itself. I find it improbable that a career 39% three point shooter will continue to shoot 33% from that distance. It's really just about that leg.

Chauncey Billups exemplifies what it means to be a professional. He could have chosen any career path, from gas station attendant to obese dog breeder to Champ Bailey impersonator, and he would have been successful due to his work ethic and level head, both metaphorically and literally: Billups's head is completely level. Similarly, his nipples work as stud finders, but we're getting off topic. As you read this, Billups is working through a daily routine at Joe Abunassar's "Impact Basketball" Camp with several other pros and potential draftees alike, while other, more talented players may be home sleeping and tweeting. That's just the type of dude Chauncey Billups is. However, even if he works out every day at 88 miles per hour and refuels with the new Gatorade "1.21 Gigawatt" series, Billups cannot change the fact that he will start the season as a 35 year old professional athlete who has run up and down a 94 foot court in 1122 separate games.

In a division that includes such young legs as Jrue Holiday, Rajon Rondo and, most recently, Deron Williams, Billups is certain to have an athletic and age disadvantage. As such, Chauncey's lesson plan is to get plenty of rest before the season so he can chase around little waterbug-like, basketball-possessing creatures for 82+ games. I'm sure tons of people are thinking "How about he stops shooting so many stupid threes" or "Maybe he should focus on the pick and roll." Those are two somewhat valid points in my opinion, but I think they'll correct themselves. Billups ran an effective pick and roll in Denver with the NBA player perhaps most similar to Amar'e Stoudemire, Nene, so I am not too worried about him getting that down pat. Additionally (and Seth or Gian has already mentioned this), I believe the reason for the uptick in three pointers was simply unfamiliarity. He didn't know his teammates very well and he was thrust into a complicated offense that was alien to him. What would you have done if you had hit 1,694 trey-bangers in your career and didn't know when to get anybody else the ball? Aside from "hand it to Amar'e or Melo," the answer is "jack threes like Gilbert in NBA Live '08."

Rest up, Chauncey. If you're going to set the tone for the 2011-2012 Knicks alongside Amar'e Stoudemire and Carmelo Anthony, you can start with defense.

Other Black NBA Players Who Sound Like Characters From Mary Poppins

Point Values on a Basketball Court, as Perceived by Chauncey Billups 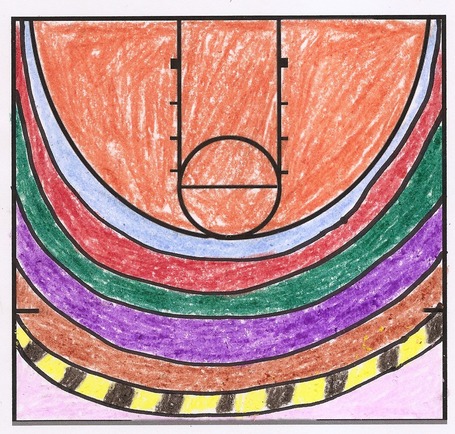 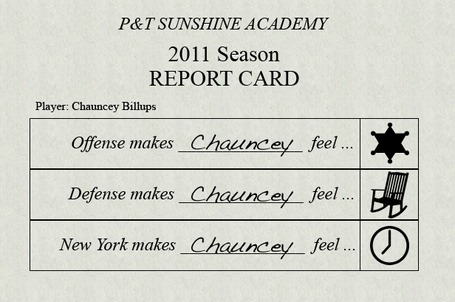