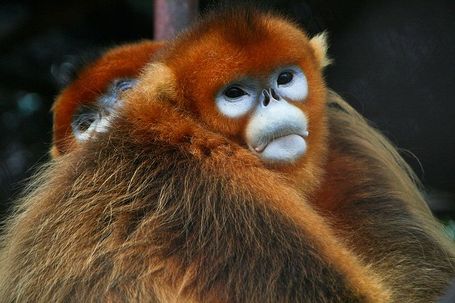 Good morning, legionnaires! I hope this post finds you all in the best of health and spirits, with luminous hair and sparkling teeth. I've rounded up some links to share, and you can find them after the jump. Peruse them at your own pace. It's not a race!

- Snub-nosed monkeys are a bunch of Southeast Asian friends (Rhinopithecus) with, well, snubby noses. The one pictured above is a golden snub-nosed monkey. Recently, it was discovered that a species of snub-noses in Myanmar "sneezes" to expel rainwater from its snub-nose. This information comes via Gilles, who thinks these monkeys look like Joan Rivers.

- Amar'e Stoudemire had some sort of Excedrin-related promotional outing in Chelsea Piers yesterday, and the newspaper guys emerged with the news that Stoudemire's back is still bugging him. Muscle strains take some time to fully heal, and there's plenty of time in the summer, so all should be well. My theory is that his back is totally fine, but he's claiming soreness so he can be like "oh, but I'll take all this EXCEDRIN® and the pain will disappear!".

- Amar'e actually did quite a bit of talking yesterday. Here he is providing unsolicited advice (well, unsolicited by the advisee) to LeBron James, and here is on "First Take".

- As far as I can tell, the rumor that you saw circulating yesterday about the Knicks trading up to the 15 spot came from here. Here's a little more detail.

- Gian passed along this neat Clyde shirt from twoeightnine. We both like it, but both agree that "forget posting and toasting" is, like, the worst advice ever.

- There's an NBA thing at South Street Seaport this weekend. Earl Monroe, Walt Frazier, and the Knicks City Dancers will all be there at various times and may or may not be willing to autograph your genitals.

- Pretty interesting article from the Daily News about Mustapha Farrakhan (who worked out in New York yesterday) and the burden of having a somewhat notorious grandfather.

- Knicks Journal interviews Jadakiss about, among other things, the Knicks.

That is all! Have splendid days, all. Don't talk to strangers.