Derrick Brown was a 2009 second-round draft pick of the Charlotte Bobcats who was reluctantly waived to make room for the Gerald Wallace trade. Claimed by the Knicks on March 1st, he sounded like your classic flyer. How fly was he? Derrick Brown was so fly he asked my lady for her number and I gave it to him. Also, he recited some fly-ass poetry while rockin' a purple robe (purple, of course, is the color of royalty). So naturally, on the court, flying was a big part of his game. But there are aspects of it that need much improvement - his jumpshot specifically. In fact, here's DB calling his shot.

This chart isn't just the QR code for P&T's upcoming iPhone app (which locates all the Jews in your proximity), it plots players based on the number of shots they take at the rim per 40 minutes versus what percentage of their total shots are taken at the rim. It's an important metric. Mark Cuban used it to win a championship. 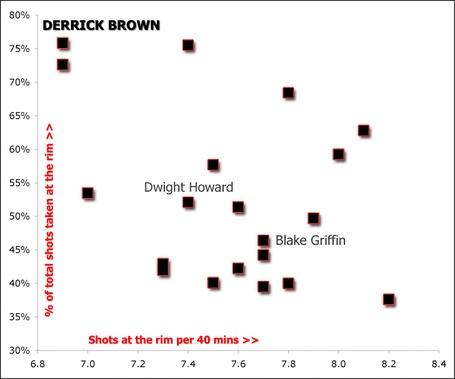 You're usually on the defensive getting pinned down.

But I'll call out every screen so you can get over him now.

See, I'll set a pick on your past for you if you choose to roll with me.

Forget burn, blow up bridges. Read For Whom The Bell Tolls with me.

Derrick, or as he insisted we call him, "Prometheus Brown", submitted this poem for his creative writing assignment. Ever the romantic, it appears a young lady caught his eye this season. While we quite enjoyed his choice of bookending the poem with this unnamed "Ambitious Girl", what's most exciting is that he's expanding his reading material from what's been assigned! 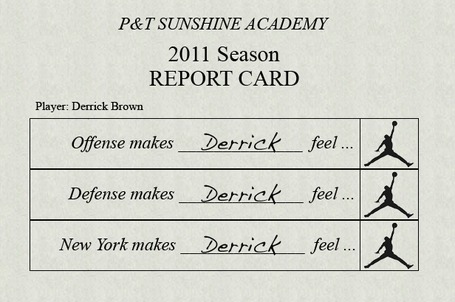