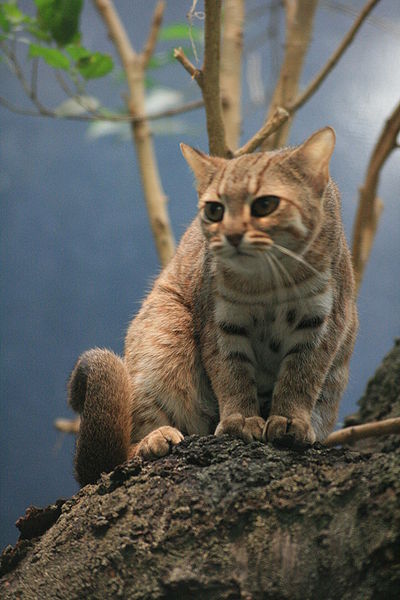 Photo: UrLunkwill
Good day, doormen. It's now draft week, and I'm right on schedule with a case of the draft week crazies. I just wrote like half a post about how I don't want the Knicks to draft a shooting guard because, after mulling it over, I really like one or two of the shooting guard prospects who might be available. Now I just want the Knicks to draft everybody. In lieu of me trying to form a coherent opinion about the draft, let's just go to the links. Jump!

- Rusty-spotted cats are some tiny, fleet li'l felines who hunt (small things) by night in the forests of India and Sri Lanka.

- The main reason for my aborted post about the Knicks not drafting a shooting guard is my unrelenting faith in Landry Fields. Based on his work ethic and self-awareness, I think he'll rebound from a dreary end to his rookie season and show up next year better prepared for a full NBA schedule and with better instincts on either end of the court. I expect him to hold down his starting spot and think Toney Douglas and Bill Walker are solid enough back-ups.

- But then there's the following: 1. Alec Burks seems awesome, and might be able to play point guard. 2. Everybody really likes Klay Thompson, including Landry Fields himself! 3. Everybody also likes Marshon Brooks. He doesn't seem that appealing to me, nor have I heard Landry Fields's opinion of him, so I'm skeptical. In any event, I still don't see shooting guard as a major area of need, but I've reverted to assuming everybody knows more than me about the draft and will happily accept pretty much any new Knick on Thursday.

- The SB Nation collaborative mock draft is rolling. My pick will probably be up tomorrow, and it's probably not the pick the Knicks will end up making. I'm not even sure it's the pick I'd make if given a second opportunity.

- Apparently, Jimmer Fredette would most like to be drafted by the Knicks.

- The Knicks, in response, are rumored to be interested enough in Fredette that they've pondered trading into the lottery. Ed Valentine is not in favor of such a move.

- Here's the link to that Jonny Flynn rumor, in case you haven't seen it yet. Doesn't really seem like something worth fretting over just yet.

- Via Gian, I'm not really sure what to make of this tweet. Were all those guys just brought back to help move an armoire or something?

- Knicks Vision has a handy list of the type of folks who have previously been taken with the 17th pick.

- This most recent blog post by Chris Sheridan brings up a few interesting thangs: 1. Wilson Chandler was drafted just hours after he worked out for the Knicks, which is a bit of trivia I'd forgotten. With Bismack Biyombo likely to sneak in a last-minute workout, I suppose that's worth remembering. 2. Sheridan's three mostlikely Knick picks are Thompson, Brooks, and Nikola Vucevic, who I'm just starting to like.

And those are the links for now! Enjoy the rest of your day, computer friends.