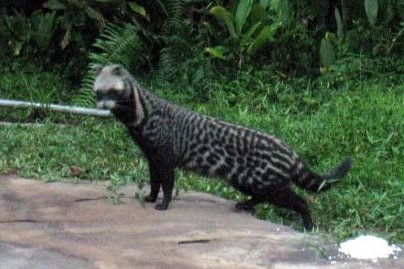 Good morrow, timekeepers! I'm departing for the weekend (with computer in hand, but still...) shortly, but figured I'd pass along some post-draft links and things before I go.

Take the jump for more things about about Iman Shumpert and Josh Harrellson than you'd ever thought you'd read.

- Y'all know I love civets. (You probably didn't know that, nor do you care, but shush.) African civets have the coolest patterning of any civet species, in my IMHO.

- First off, I talked to two SBN college bloggers about the draft picks, and got a helpful response from each. I was going to put them in a separate post, but whatevz. Consider this a leak.

Here's Winfield Featherson of From the Rumble Seat on Shump:

Good player. Raw because of lack of development at the college level. Can take over a game in good ways and bad ways. Good ways because he's can be a leader and be the guy we need at the end of the game to take that last shot. Bad way because he always makes sure he's the guy taking that last shot (he didn't like to share the ball very much).  When losing, it seemed like he thought he was the only one who could bring us back in the game.

Hmmkay. Here's Glenn Logan from A Sea of Blue on Jorts:

The big question for Josh at the NBA level is, "Can he guard his position?"  Josh is a big body with good feet, and if he continues to be motivated to work hard, I don't think there is any doubt he can be a serviceable situational backup at either center or power forward for some NBA team.  Whether it's the Knicks or not is another matter.

Some things most people don't know about Josh:
He can shoot the ball with range, all the way out to the college 3-point line.
He is as good a pick-and-roll player as you are ever going to get in the second round.
He had a strong, durable body that can take a lot of punishment, and deliver as much as he takes.
Harrellson is a quirky personality that is always upbeat and positive.
He won't be the most coachable player in the NBA.  He has a touch of the hard head and isn't as quick to pick up things as others.  But when properly motivated, he can really be surprising.
Harrellson wants to succeed at the next level, but I think he mistakenly believes that will be enough.  Calipari was able to motivate him with results, but that's going to be harder on the NBA level since he will be competing against very talented players.
Harrellson rebounds the ball with two hands and uses his body well to get position.
Harrellson will do pretty well against all but the super athletes (aka Dwight Howard) or the huge guys in the league that can shoot over him.  He doesn't have a great vertical, possess great length, and is not a superior athlete, but he does move his feet well for a man of his size and is not afraid of contact.  He needs to become even more physical than he already is if he wants to succeed in New York.

Unfortunately, I didn't see the Knicks play enough with their new roster to be familiar with them right now, but the big question is where Josh fits in defensively.  The Knicks have a great front court with Staudamire and Anthony, and Harrellson could provide short spells of relief when he learns the speed of the NBA game.  I doubt that he will contribute immediately, but doubting Harrellson has been the default position with Kentucky fans all year, and he has proven all of us wrong over and over.  Take that under advisement, and in a good way.

Excellent! Especially the part about the pick-and-roll!

- These discussions are transpiring with considerably more reason and insight all over P&T as I write this, but if you're interested, here's what I wrote for The Sports Section about how the new guys might fit. It's super optimistic, but that's just how I do after a draft.

- By the way, I think I'm gonna call him "Shump" for now. And yes, "shumping" will be a verb someday. We can't determine its meaning until we've seen Shump shump, ya know?

- From Connor R in the Fanshots, here he is talking to Craig Carton, who is endlessly irritating. Thankfully, Iman is not. In everything I've heard and read from him, he's been interesting, engaged, and confident. If you find more links to radio interviews, (there are more) please pass them along!

I think I am a good on the ball defender as well as playing passing lanes. What I have to get better at is not taking so many chances. It had a lot to do with us losing this year. I took a lot of gambling to take intiative to get a win. I have to tone down the gambling and continue playing solid defense.

- Here's Shumpert's blog. He calls himself "Shump Shump" and also "iMan" (which sounds like Steve Jobs's futuristic vision of the human being) and has written quite a bit there. The prose isn't always the prettiest, but he's an engaged and engaging guy. I'm also a big fan of using "3" to r3pr3s3nt the letter "E". Really spices things up.

- Bandwagon Knick's draft reaction. BK is pretty much the destination for things I would write about things if I could write properly. Definitely worth a read.

- I loved what Jonathan Fishner had to say about Josh Harrellson:

Before he became a Knick I knew a couple things about Mr. Harrellson. His jersey was too small, he was a tough, obnoxious, country sumbitch who provided a steady garbageman presence for the uber-talented Kentucky teams of the past few years.

- Update: Just realized I forgot to link Jamie O'Grady's open letter to Shumpert. As an apology, I've made this link in bold. Click it!

There's more, (and it's more negative) but he had me at "obnoxious". That's exactly what the Knicks need in a big man. Not being facetious. My uninformed brain has high hopes for this fellow, and I'm only going to get more delusional over the summer and beyond.

That's all for now! Ross should have a Know the Prospect on Shumpert up for us in the near future, and that should realllllly help us get familiar. Have pleasant afternoons, all. Maybe treat yourself to an ice pop or something. It's okay. I won't judge.