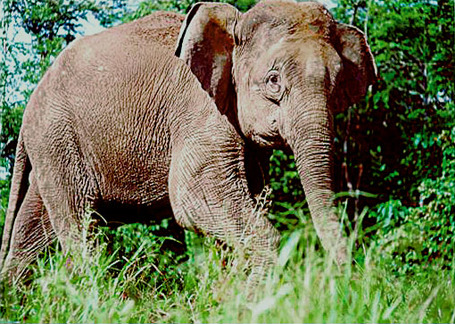 Hello party people! I don't want to intrude on what I imagine is a wonderful day of enjoyment and/or lovemaking on your part, but if you have time...how about a few links?

- There are "pygmy elephants" in Africa, but the term usually refers to the Borneo elephant, a species introduced to the island 300 years ago that is now genetically distinct from its source population. They're called "pygmies" but aren't all that much smaller than normal Asian elephants (or "Azn" elephants, as they like to be called).

- First order of business: Today is Donnie Walsh's last official day as president of the Knicks. Once again, thanks to Donnie for restoring some semblance of competence and dignity here in New York. We bid him a hearty farewell and hope for everyone's sake that there's cake at MSG this afternoon. (Meanwhile, it's about to be Grunwald time.)

- Here's a neat interview with Chauncey Billups. The message most internet folks are taking from this is that Chauncey doesn't see a need for another "superstar" or whatever. Draw your own conclusions.

- Tommy Dee points out that the group of assistant coaches expected to get contract extensions either does or does not include Herb Williams, depending on where you look. I love Herb and hope he sticks around. I wanted that guy to be head coach for most of the time I was in high school, which tells you that he's been here a WHILE. I'm like 50 now.

- Carmelo Anthony has elbow bursitis? Word? Melo hasn't been shooting or lifting because that wing's still bugging him. He's anti-surgery, but pro-hard hats.

- Meanwhile, Melo's signing Cassidy to his record label or something. Also, Melo apparently has a record label. I remember a few of y'all arguing about that guy a little while back, so I thought this might be of interest.

- Speaking of hip-hop rappin', here's the long-awaited word from Skyzoo on the Knicks' pick of Iman Shumpert. He'd like him to take after Penny Hardaway, which is fine by me, Mr. Zoo.

- Gian and I were just talking yesterday about how awesome the Philippines are and how badly I'd like to go. Sounds like I shouldn't have turned down that job as a Knicks City Dancer.

- Via our friend Robert, Paul Lukas mentioned the Knicks' new logo palette in a Uni Watch article, and suggests that it might be a sign of a whole new uniform. I, for one, like the the new three-color logo a lot better. I'd most like this or this or this to come back, though.

- Update: If you haven't read it, Knickerblogger's draft night recap is wonderful stuff. I was delighted to meet Jim for a moment not long after the Shumpert pick.

That is all! As you were.