As we go through these report cards alphabetically, it's fitting that Carmelo Anthony is called up first, for no one, not even this team's best player, stole headlines and affected the final outcome of the Knicks' season quite like Melo. But before we go any further, we start with an anagram that best sums up his year in orange and blue.

An oracle, no myth.

As the Carmelo Anthony rumors took their first steps, I did my best to let the giants of this business handle the rabid speculation and continued to focus on the aspects of this team that I enjoyed, like Clyde or the players that were actually on the team. (Mostly Clyde, though.) Because what insight do the talking heads provide? What's fruitful about comment wars? How often do you get value out of an argument on Twitter? That stubbornness allowed me to enjoy whatever was on the way organically, I think.

All of the arguments against the trade were annoyingly logical (cause I illogically wanted Melo). The Knicks needed front- and backcourt help and Melo addressed neither of those issues. An already legitimate offense that lost track of the other side of the ball too often didn't need to compound the problem with another scorer/defensive liability either. And as the studies about Melo's inefficiencies on offense poured in - the offense that was supposed to be his only asset - the more I was convinced that this entire ordeal was unnecessary. Except that it was Melo. I mean, dude's pretty boss.

After all the goods were exchanged, the Knicks were left with an even more top-heavy roster that had the same problems rebounding and stopping teams as before. The offense slowed dramatically as Melo imposed his style and it wasn't entirely clear if he and Amar'e Stoudemire could get comfortable with each other in time for the Playoffs. The number of isolation plays he ran simply didn't complement Amar'e's need to move without the ball because they occupied the same space. And indeed, NBA Stats Cube tells us that both players scored significantly better when the other was on the bench.

Through all the struggles figuring "it" out, though, a hypnotic jab step, an innate sense of the moment, and late game heroics made me want more. It felt like there was something in Melo that he'd yet to tap for us in the regular season. Maybe it was just his lore, or perhaps I needed personal validation for the trade, but I selfishly wanted a defining game. It came. On the biggest stage the Knicks have graced in over a decade, Melo showed us the kind of brilliance and competitive fire we fans often overstate about players. In the Playoffs, Carmelo Anthony was no myth.

Melo's production this season was on par with his career averages almost across the board (funny how that happens). There were significant changes in how he produced offensively under D'Antoni, however. 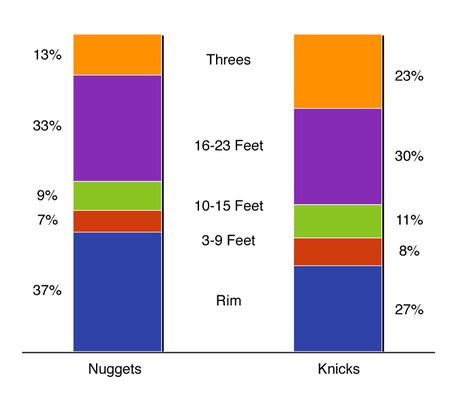 Melo took 21.8 and 21.9 shots per 40 minutes in Denver and New York respectively but the types of shots he took changed entirely. In Denver, 37% of his shots came at the rim. In New York, that dropped to 27% as he reallocated those shots to threes, bumping downtown attempts to 23% of his total shots. Not surprisingly, his free throw attempts dropped from 9.4 to 7.7 per 40 minutes as he distanced himself from the basket. Normally this trend should be unsettling as you don't want to see your stud wing player shy away from the hoop. But Melo was shooting lights out. He went from shooting 33.3% on threes in Denver to 42.4% in New York which boosted his effective field goal percentage to 51%. It's an anomaly in all likelihood but he certainly enjoyed the freedom to hoist from three-point range in this system.

An increase in threes made and attempted is one thing, but Melo scored in the same situations as ever. He didn't break his habit of holding the ball and, according to My Synergy Sports, spent 37% of his possessions in isolation, only 0.3% less than he did as a Nugget. It's frustrating that he has Amar'e at his disposal and this is his preferred method of attack. It's just something that we're going to have to live with, though. Sure, we want to see the two run pick-and-rolls the same way we want music and movies to not suck anymore, but Melo's simply not the kind of player to make it work. He ran only 62 PnR's as a Knick. Sixty-two. For someone who has the ball as much as he does, in this offense specifically, that's an absurdly low total. He's also only scoring 0.84 points per possession (PPP) as the PnR ball handler compared to 0.97 PPP in isolation. Scoring and passing out of the pick-and-roll is not his game.

But he's inspiring, deflating and everything in between with the ball in his hands. Let's give him a full training camp.

The obvious choice for Melo's lesson is defense. Man defense, help defense, you name it; Carmelo Anthony isn't terrific at it. Practically, Anthony has probably gone all 27 years of his life coasting on the defensive side of the ball to save energy for the other end, and he may never break that habit. The rumored defensive specialist the Knicks are allegedly looking at may figure some Gooz-Frah-Bah method out for him, so let's hope for that. One positive facet of Anthony's defensive game is his rebounding. He posted a career high in rebound rate during the '10-'11 season and unless the Knicks draft Kenneth Faried and play him immediately and excessively, Anthony's rebounding should stay put.

Carmelo, your lesson is to rise to the standard of leadership Amar'e Stoudemire has set within the team's culture. Seth and I were privileged enough to attend training camp last year, where we saw a bouncy, energetic, and most importantly, vocal Stoudemire yelling out during drills and scrimmages. Whether it was bellowing after a huge dunk, staying on the court an hour after practice to get extra shots up, or actively trying to outrun his teammates throughout fast break drills, Stoudemire helped Mike D'Antoni to set the tone for training camp. No one was half-assing their backpedaling drills if Stoudemire was looking (except Eddy Curry, who probably just didn't give a fuck who was watching). I think it took staff and media by surprise to see how focused Stoudemire seemed to be for the season, one of greater possibilities than anyone had seen in nearly a decade. Well, ladies and gentlemen, at the risk of beating a dead horse, this is the most important, possibilities-filled season in a decade, now.

Rise to the occasion right out of the gate, Carmelo. For the first time in your career, every word, action, thought, wet dream, receding hair, and narcotic addiction will be analyzed every hour of every day. You are expected to ensure that other, less talented and far less experienced Knicks work their asses off. You are expected to compete with Stoudemire for Practice MVP every day. You are expected to remind everyone that no, this loss wasn't okay, we have to play hungrier if we want to compete with the two new beasts of the east, as well as the three old ones. Stoudemire seemed to have shit wired in December, when the Knicks were playing winning basketball behind stellar night-to-night effort by their superstar. Maybe things didn't work out too well for your and Allen Iverson in Colorado, but fortunately for everyone, this town is big enough for the both of you, and four shoulders are better than two. Speak up, set the tone, and work your ass off.

Carmelo Anthony's moves list if he were a Pokemon

Level 39 - Isolate on the Elbow

Level 44 - Pump fake in the post to draw foul

Level 51 - Put back the rebound 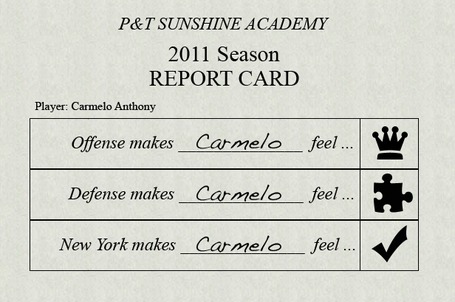