Renaldo Balkman is a pos-vibe emanator. When life gives him lemons, he volunteers at a fundraiser for cancer research. It's standard behavior on his part. His return to the Knicks was also fairly standard. Of course, standard for Humpty is sublime glory and that's precisely how we would describe his second stint with the team. Our deepest regret, and Mike D'Antoni's as well, is that he only did the basketball thing for 18 minutes. That small sample size is what makes it difficult to determine if Balkman is the best player in Knick history or merely the least worst defensive player of all time. His life season in anagram form?

Balkman was traded in '08 to Denver for cap relief and roster flexibility. He was then traded back to the Knicks as part of the Carmelo Anthony deal to make finances work. These days he's rumored to be on the table for a draft pick, again, for financial considerations. This kind of history makes me certain of one thing: these teams can't afford to pay Humpty the max contract he's sure to receive after his deal expires.

I texted 'Naldo about his stats and he replied simply with "*SMDreads*". He's no fool. He knows these things don't really matter. What matters is Balkman went 1 of 2 from downtown in a Knick uniform. Extrapolate that. If Humpty played starters minutes, he would have hit two threes a game or 164 threes this season. That's only four behind Ray Allen for fourth most threes made.

My second favorite basketball player ever, Renaldo Balkman has what you might call a different kind of potential. I'll tell you with a straight face that he's in the top 5 in the NBA in terms of pure anticipation. As noted above, albeit in an extremely small sample, Balkman has a gift for picking off passes. Anticipation, which cannot be measured tangibly except through steals and blocks, manifests itself in the split second of every loose ball. Balkman has a keen eye for which balls to go after, even some that appear as though he'll never have a chance. 50/50 rebounds typically go Balkman's direction, although a valid counterargument is that everything gravitates toward Renaldo's soul, even ghosts (which explains why he's named his soul "Pac-Man," as well as why he is constantly jogging around and eating everything in sight). Actually, while we're on the subject of rebounding, check out his numbers from the first three years of his career, when he actually received significant minutes on a regular basis. His rebound rates compare favorably to those of Gerald Wallace. The offensive discrepancy between the two explains the minutes discrepancy, which is what brings me to my next section.

The time has come. Balkman is entering his prime and needs to do something to prove he still belongs in the NBA, and not in the Hall of Fame / Outer Space. His ball handling and court vision need work, which goes doubly for his shot. Overall, actually, he contributes little to half court offense other than offensive rebounds and leading the NBA in "random cuts per 36." What this means is that Renaldo's lesson is to focus on defense and aim to become Luc Richard Mbah a Moute version 2.0. A shorter Jared Jeffries, Mbah a Moute contributes very little offensively but can wet blanket the shit out of nearly anyone in sneakers, which gives him value. Although Balkman is defensively valuable right now, it is up to him to take his physical gifts and superior anticipation and carve himself a role in the NBA. Defensive stoppers are en vogue, with great help from the proliferation of advanced stats. Keith Bogans started every fucking game this year for the number one overall seed, and Bruce Bowen has how many rings? Soon-to-be-supplanted Thabo Sefalosha started all but three games for the Thunder over the past two seasons, and Chuck Hayes makes tons more money than I ever will. The point I'm trying to make is, of course, that purely defensive players are thriving. Gifted with more athleticism than any of the names I mentioned, the only thing holding Renaldo Balkman back is his mind.

Renaldo should come into training camp demanding to guard Carmelo Anthony and he should shut him down completely. Easier said than done, obviously, but Balkman needs to up his tenacity and look to become a defensive anchor who Mike D'Antoni cannot afford to sit, er anchor down. With the Knicks' New World Order set to begin in earnest, and with very little elbow space in the wing rotation, Balkman may wind up at another team's training camp in a few months. I would cry deeply for a fortnight, but a move to a different team may be the best thing for Balkman's career. I hope he's still around in a couple of months, and I hope he takes my advice to learn tendencies, study scouting reports, and shut motherfuckers down.

Pick me for your team!

I have energy, energy, a bubbler, and energy,

Combine ingredients in a bowl or pot. Bake a long, long time.

Students were asked to pick one favorite example of their artwork from this year to be their "masterpiece". This is Renaldo's. 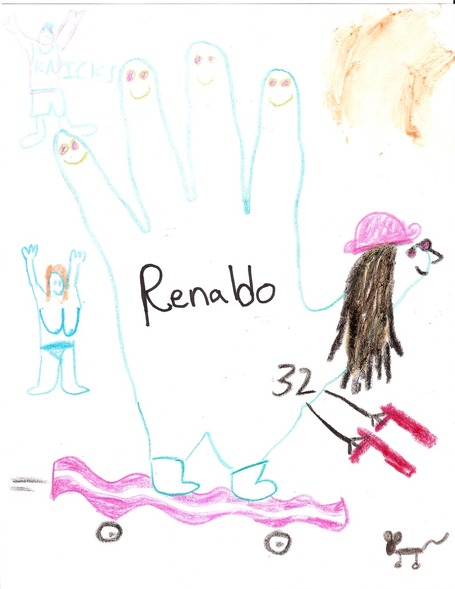 Instructor comments: This particular piece is from our "Hand Turkey" unit. I think Renaldo chose well, because this really shows off his creative nature. As Renaldo described it, this is a self portrait of him "baconsk8ing in a cerise hat". He explained to me that the figures in the background are Andy Rautins, Lisa Lampanelli (we may need to schedule a separate meeting to discuss Renaldo's interest in human anatomy), and a mouse. The objects in Renaldo's hands, he assured me, are Super Soakers. After talking it over, I think Renaldo realized that a turkey's tail feathers aren't animate beings and that he shouldn't eat his fish sticks so close to his artwork, though we agreed that the ketchup stain looks like a beautiful sunset. Renaldo sure does have an impressive imagination! 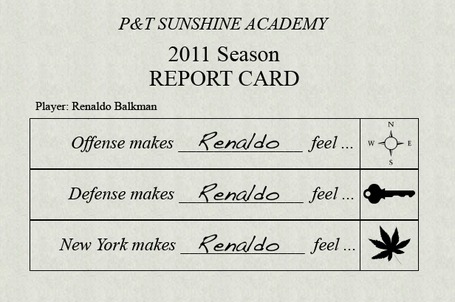