Anthony Carter was yet another addition from Denver that was expected to make little impact in the closing weeks of the season. How could he? He was on the wrong side of a certain age. He was stepping into the most difficult position of a difficult system. And he had three or four guards ahead of him on the depth chart.

What we didn't account for was how nothing phases men who've seen it all. See, AC was the OG captain of the starship -- I'm talking before Kirk and Pike. If he could pilot in warp speed, Mike D'Antoni's offense was totes like, "Whatevz, bro." Simply put, Anthony Carter is the man.

Not only was Carter the OG commander, he was also the original Fastest Gunslinger in the West. We're often told that time slows down for the greats of the game but AC is blessed with John Marston-like dead-eye targeting. 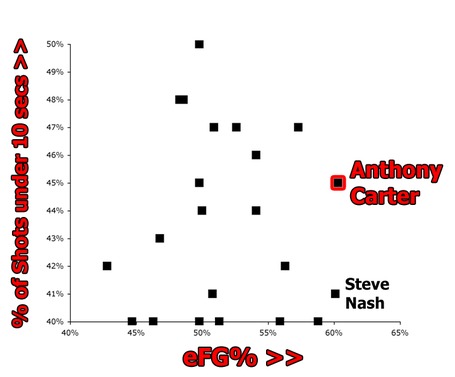 This graph plots players based on the percentage of shots they take using fewer than ten seconds of the shot clock vs their effective field goal percentage (eFG%) on those shots. AC, sharpshooter that he is, lead all point guards in eFG% while taking 45% of his total shots in under ten seconds. Not even fellow ageless brother, Steve Nash, could match his feat. That's the kind of quick-draw accuracy only an original gunslinger can provide. The only other explanation is that while most men acquire "Old Man Strength" as they age, Anthony Carter might just have been the first to acquire "Old Man Speed".

If he gets to be Anthony, I get to be frank. And when I'm being frank talking to Anthony, I'm talking to him about cardio. Anthony Carter showed during the playoffs that he is a useful emergency point guard, but he also showed that he is nothing more than that in the NBA.

Far be it from me to tell someone of Carter's stature that he should give up getting paid to do what he loves, so I won't recommend retirement. Instead, and this is in no small part due to my respect and admiration for someone who has carved a long career in my favorite sport, I recommend, similarly to Chauncey're recommendation, to get plenty of rest and do plenty of cardiovascular exercise this summer/Fall. It's one thing to possess the will to go out and compete all over the country for two thirds the year, but another thing entirely to do so as a 36 year old man with relatively limited athleticism. Stay in shape, Anthony, and you just may get picked up again by a team looking for an end of the bench player who won't give you any surprises, just hard work and veteran savvy.

"Oh Lord of Hosts," cried a voice among the crowd, "provide a Champion for thy people!"

This ejaculation was loudly uttered, and served as a herald's cry, to introduce a remarkable personage. The crowd had rolled back, and were now huddled together nearly at the extremity of the street, while the soldiers had advanced no more than a third of its length. The intervening space was empty--a paved solitude, between lofty edifices, which threw almost a twilight shadow over it. Suddenly, there was seen the figure of an ancient man, who seemed to have emerged from among the people, and was walking by himself along the centre of the street, to confront the armed band. He wore the old Puritan dress, a dark cloak and a steeplecrowned hat, in the fashion of at least fifty years before, with a heavy sword upon his thigh, but a staff in his hand to assist the tremulous gait of age.

When at some distance from the multitude, the old man turned slowly round, displaying a face of antique majesty, rendered doubly venerable by the hoary beard that descended on his breast. He made a gesture at once of encouragement and warning, then turned again, and resumed his way.

"Who is this gray patriarch?" asked the young men of their sires.

"Who is this venerable brother?" asked the old men among themselves.

But none could make reply. The fathers of the people, those of fourscore years and upwards, were disturbed, deeming it strange that they should forget one of such evident authority, whom they must have known in their early days, the associate of Winthrop, and all the old councillors, giving laws, and making prayers, and leading them against the savage. The elderly men ought to have remembered him, too, with locks as gray in their youth, as their own were now. And the young! How could he have passed so utterly from their memories--that hoary sire, the relic of longdeparted times, whose awful benediction had surely been bestowed on their uncovered heads, in childhood?

"Whence did he come? What is his purpose? Who can this old man be?" whispered the wondering crowd.

Meanwhile, the venerable stranger, staff in hand, was pursuing his solitary walk along the centre of the street. As he drew near the advancing soldiers, and as the roll of their drum came full upon his ears, the old man raised himself to a loftier mien, while the decrepitude of age seemed to fall from his shoulders, leaving him in gray but unbroken dignity. Now, he marched onward with a warrior's step, keeping time to the military music. Thus the aged form advanced on one side, and the whole parade of soldiers and magistrates on the other, till, when scarcely twenty yards remained between, the old man grasped his staff by the middle, and held it before him like a leader's truncheon.

The eye, the face, and attitude of command; the solemn, yet warlike peal of that voice, fit either to rule a host in the battle-field or be raised to God in prayer, were irresistible. At the old man's word and outstretched arm, the roll of the drum was hushed at once, and the advancing line stood still. A tremulous enthusiasm seized upon the multitude. That stately form, combining the leader and the saint, so gray, so dimly seen, in such an ancient garb, could only belong to some old champion of the righteous cause, whom the oppressor's drum had summoned from his grave. They raised a shout of awe and exultation, and looked for the deliverance of New England.

I could have cut it short, but why deprive today's youth a chance to read some lesser-known work by America's greatest linguist? 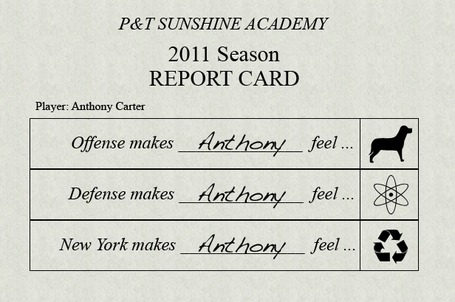