Amar'e Stoudemire and Chauncey Billups are both "cleared" to play basketball.

Share All sharing options for: Amar'e Stoudemire and Chauncey Billups are both "cleared" to play basketball.

Recall that Amar'e Stoudemire and Chauncey Billups departed the playoffs with lingering injuries. Actually, first recall that there used to be a basketsports collective called the NBA, and they had their own playoffs and everything. Also, there used to be some Knicks, and the Knicks were in the playoffs. They won the whole thing, if I remember correctly.

Anyway, the Knicks won the 2011 Super Cup with minimal help from Stoudemire and Billups because of nagging back and leg pain, respectively. Those injuries haven't entirely disappeared, and both men have been hesitant to plunge into basketball-related activities (e.g., shooting, dribbling, headbanding) without medical clearance. Well, good news! It's medical clearance week! Amar'e, as was reported by Newsday's pillar of virtue, Alan Hahn, is/was seeking the go-ahead to do full workouts this week. Chauncey, too, has been deemed healthy enough to prepare for and participate in camp ("camp" being anything from a hypothetical league-sanctioned training camp to Stoudemire's proposed informal mini-camp to American Pie Presents: Band Camp).

As Hahn reminds us, all of the above comes with the disclaimer that, seeing as that there are no "Knicks" at the moment, let alone a "Knicks training staff", clearance was sought from private medical professionals. Per anonymous sources, I have learned the identity of said medical professional. Take the jump for the bad news. 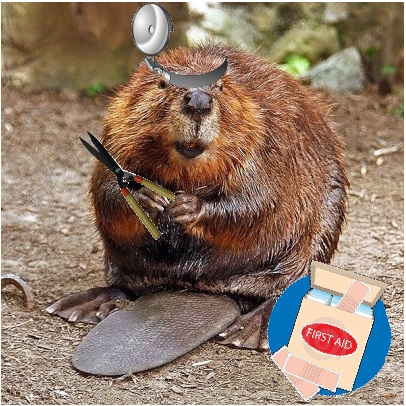 This is "Dr." Merriweather Goldstein, the orthopedist consulted by both Stoudemire and Billups. He holds two professional degrees, but neither is in medicine (one is in interior design and the other is in something he describes as "salad arts"). Sources with knowledge of Mr. Goldstein's practices inform me that the average physical assessment consists primarily of "gnawing" and that he regularly fails to take medical histories and sterilize his equipment. Amid all these restrictions, this is who our beloved Knicks have been consulting for their medical issues.

THE LOCKOUT MUST END.