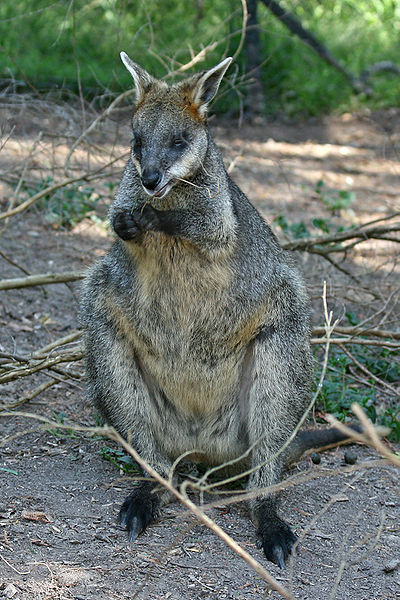 Good day, settlers! We've got a second consecutive day of mammalian links, which means news is picking up, which can only mean that basketball season is nigh! [Bites own tongue off].

- "Swamp wallaby" is just the best phrase. Also, people in Queensland call these guys "stinkers", presumably because they stink. Swamp wallabies are gangsters.

- Here's an article Marc Berman wrote about Mike D'Antoni raising funds for his alma mater, Marshall. Fun reasons to click that link: 1. There's something in the URL about a "Marshall Plan" 2. Chad Pennington is reportedly still a sentient lifeform. 3. This:

On Sept. 10, before a Marshall-Southern Miss football game, D'Antoni will have his No. 10 basketball jersey retired. Knicks assistant coach Dan D'Antoni, Mike's brother -- who also wore No. 10 at Marshall -- will be the presenter.

They couldn't have somebody else present and just say they're retiring the number for both of them? Dan-D'An hasn't been overshadowed enough? Poor Dan-D'An.

- Downgrading was a thing that happened to the United States credit rating, and it's also a thing that's happening to Madison Square Garden stocks. SELL! SELL! Or perhaps BUY! BUY! Either way, definitely shouting. SHOUTING!

- Carmelo Anthony and some tall guy are going to appear as themselves on Law and Order: SVU. Based on what the other guy looks like, I'm going to assume that SVU stands for "Scary Velociraptor Unit", because he looks like what I imagine a scary velociraptor would look like based on fossils and digital renderings. Trey Kerby made some great jokes about this.

- The shots of the '90s Knicks in this are very cool, but yo, Bryant Stith!

- Photos of Amar'e Stoudemire just making a big scene all over China.

- Impact Basketball, that big-ass gym/overall sports powerhouse in Las Vegas, will be running some sort of league in September. Chauncey Billups frequents the spot, so he might show up. Gripping, I know.

That's all for now, stinkers! Behave yourselves.