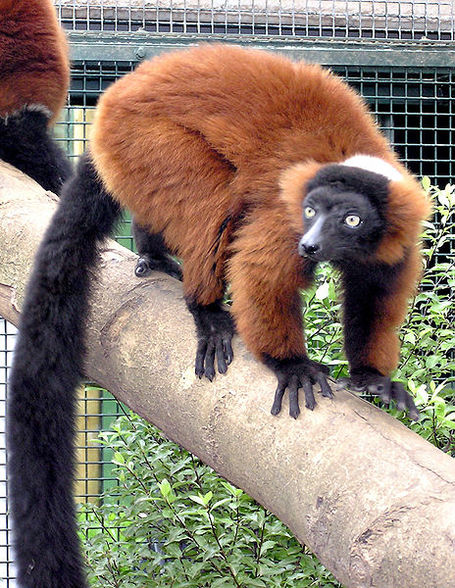 Good day, stevedores! Look at this, guys! I've actually accumulated enough links and things that I can muster a somewhat healthy mammals post! Take the jump for a ragtag assortment of items from around the internet. I assure you that none of them are even remotely important.

- First of all, red-ruffed lemurs! I chose these bad boys because 1. They're great. 2. I visited some at the Artis Zoo in Amsterdam, and they let you just hang out with them! They have their colony in a very loosely structured enclosure that you can WALK RIGHT INTO. I don't think you're supposed to touch the lemurs, nor do they seem to want to be touched, but the li'l rascals run right around your feet and leap over your head and stuff. It's magical. I highly recommend it.

- Here's MSG's most recent video walking you (well, you with Al Trautwig as your proxy) through the new Rangers and Knicks locker rooms. (This, by the way, is the animagination of what our guys' locker room will look like). Much has been made of this new area in which you can watch players move to and fro in the tunnel (which seems like a totally frivolous and uninteresting experience, but I'm certain I'll never be able to afford it anyway). Less has been made of the fact that our Knicks will now emerge from the corner of the court (as opposed to the center, which is where Willis Reed so famously limped). It is what it is, but what it's NOT is a fleet of hot air balloons descending from the ceiling, each containing a single Knick spinning a basketball on his finger. Nobody every listens to me.

- Via Skeets, here is Carmelo Anthony with googly eyes, like you all asked for.

- If you haven't been paying attention to Charles Oakley's li'l situation with the law, this will explain it to you. Don't hit each other, friends.

- ESPN New York is doing a Knicks Hall of Fame thing and inexplicably excluding Randolph Morris. I don't get it. What's their angle?

- Alan Hahn blogs on Amar'e going to China, the plodding pace of the coach and GM searches, and the potential contractual casualties of the lockout. He also recycles the term "trio grande", which is neat.