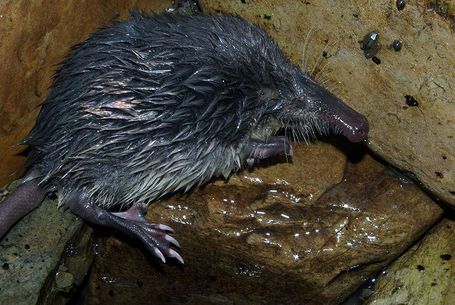 Good day, frijoles. I hope you're all having fruitful Wednesdays. You wouldn't mind if I share some links, would you? I know you're eating, but I can just set them down over here and you can have a look at them whenever you like. I'll just put them here after the jump, okay? Okay. Don't forget them, though. Okay, see ya.

- First, desmans. Desmans are pretty gross, I think. There are two genera of them, each containing a single species. They're kinda like swimming moles. I would've named them "aquasnoofers" if I was in charge of naming animals, which I wish I was.

- Okay, Knicks things. I do have a few. One is sort of an addendum to StarksMiddleFinger's compilation of Iman Shumpert stats and highlights from Impact League play to date. It's not much. It's just this video of him being interviewed after a day of competition. There's not much to glean from it other than further confirmation that Shump seems like a cool, intelligent friend.

- Big news for those of you who sometimes wear shirts (recent polls indicate about 9% of P&T readers fall into that demographic): The folks at Black Market Wares have produced a shirt paying tribute to our beloved Larry Johnson. Simple, yet evocative, and very likely to cause passers by to exclaim and gesture at you.

- Video from the Mike D'Antoni Marshall jersey retirement we heard about. The D'Anbronis look tan.

- First of all, Bread City is back. Second of all, this is a fun li'l bit of nostalgia.

- Megan Ann Wilson, who knows a thing or nine about sports and an equivalent amount about fashions, posts about Amar'e Stoudemire's fashionable enterprises with Rachel Roy.

- Hey, why not? It came out today that a former member of the Knicks once hooked up with Sarah Palin. If you've somehow avoided this bit of news today, take a guess who it is in the comments, then do a bit of research and come back.

Okay, that's it. Have great days and try not to eat your own limbs because you need those.