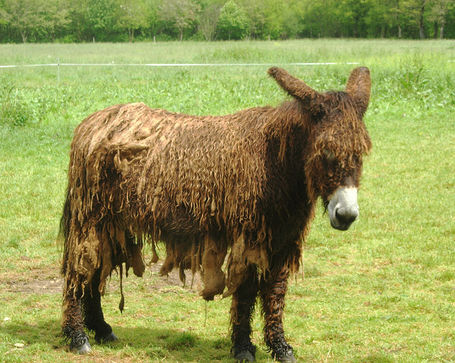 Good afternoon, rakes. It's a bit of a dreary one, at least where I am, but I hope you're thriving just the same. Today, I bring you some dreadlocked asses and a handful of entirely trivial links. Enjoy!

- The Poitou donkey, or Baudet de Poitou is an exceedingly rare and endangered breed of domestic donkey that comes from France. I don't usually do domestic animals, but these guys' endangerment and taste in hairstyle won me over. Balkman de Poitou?

- It sounds like Ronny Turiaf's fractured hand is healing nicely. The article is a few days old, but I think we can assume that Ronny hasn't been punching boulders or anything and the report remains true.

- Over at Bread City, Jake writes on the local cultural relevance of the '70s Knicks in the context of that long-lost Annie Hall outtake with Woody Allen and some philosophers playing hoops with the Knicks.

- Doing money things: Carmelo Anthony, who participated in some charity trading (of, like, money? I don't understand these things. Point is, it was charitable) last week and listened to Obama talk about raising taxes last night. The former link includes some semi-hilarious video.

- I don't usually write much about active former players, but our beloved cock is headed back to the nest until this lockout ends.

- Amar'e Stoudemire is the 4th thebasketballjonesest player in the NBA!

- A photo of John Starks, just rappin' to some reporters about man cleavage 'n' stuff.

- I'm editing the Sports Section today, yesterday, and tomorrow (not in that order), if anyone cares. In general, I'll be posting there about once a day, but usually not about the Knicks, at least until basketball returns. I'll always link if I wrote something Knicks-y of import over there.

That's all I've got for now! Still hoping/waiting for the Impact League folks to post scores and stats from yesterday (or just those for Team D. YEAH TEAM D!), but I'm not sure when or if that's going to happen.