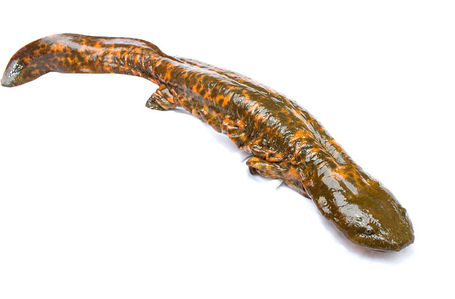 Good day, robomoms! We and the Knicks have a quiet Friday to lick our wounds from last night's spanking at the hands of the Memphis Grizzlies. Lick them wounds, and if you haven't any wounds, maybe go help lick Carmelo Anthony's ankle? No, it won't be weird. Also, take the jump for a few links.

- Yo, hellbenders live right here in the eastern United States. Tell me y'all have seen one of these before. They sound TERRIFYING, and the pro wrester-esque name just makes them even terrifyinger.

- Melo, regarding his ankle:

"Yeah, I’m beat up," he said with a smile. "I want to see how I feel by Saturday. I’m not going to force it. If my ankle’s not right by Saturday, then I’ll be looking at Monday."

He also claims to have no feeling in his wrist, which seems less than ideal. I guess that's why they give you two on your birthday.

- Also in that above link, another regretful quotation from Iman Shumpert:

"I made some bad decisions, didn’t knock down shots," he said, adding: "Instead of making other plays, I sort of just kept settling. That’s part of the game. I’ll get better at it."

Shump knows the deal. I'm looking forward to see how he comes back on Saturday.

- Speaking of Shump, Bethlehem Shoals wrote about him for the GQ sports blog, and it's worth a look. I love Shoals and tend to take his word as gospel, but this piece strikes me as the opinion of someone who hadn't seen much of Shumpert before the last game or two. Yes, his performance this week has been pretty grating, and yes, some of us Knicks fans have been hyping him up far too much, but the kid looked totally composed and game-ready in starts before that. I don't know why he suddenly started heaving, but I think those of us who have seen all of his work to date as a Knick will agree that he's already capable of much better. And let us not forget that this is 1. A rookie 2. A back-up and/or two-guard being thrust into the starting point guard spot of the Knicks. If the Knicks have problems, I don't think Shump is any sort of mascot for said problems. (Now don't go shoot 5-20 again, Shump.)

- Also speaking of Shump, the Knicks gave the rook some sliced tomatoes to eat before last night's game. The tomatoes were meant to prevent his leg cramps, but it seems like they gave him BRAIN CRAMPS instead, am I right!?

- Oh, and the meat of the article linked above (and here again) was that Carmelo Anthony got named a co-captain at the team's Christmas party. So, that's cool. Perhaps there are thoughts to be thought about Tyson Chandler not being named a captain, but...nahhhh.

- Melo is shaping up to be an All-Star starter. Amar'e and Chandler are also pretty high vote-getters, though both will end up being reserves, if anything.

That is all for the moment. Have pleasant, bruise-free days, everybody!