[Deep breath.] Well, that was pretty debilitating. Heartbreaking, too, as JWurm said in the game thread. The Knicks, to their credit, made a game out of what a lot of us expected to be a blowout. In fact, they made about 1.25 games out of it, and in doing so, gave us a magnified version of nearly every theme and storyline that's been following the team thus far. Seriously:

- Throughout most of the game, there was decent ball movement that led to open shots. For stretches, those open shots fell, and for other stretches, they did not, but the offense was undeniably more fluid than we're used to. In the fourth quarter and subsequent overtimes, the ball movement gave way to Carmelo Anthony isolation plays. He made several kick-outs to open shooters (who missed), but predominantly looked for his own shot. He hit several crucial baskets-- four consecutive in the final two-ish minutes of regulation, including the game-tying jumper-- but missed some other hideous ones while double- and triple-covered.

- In many cases, switches on defense led to miscommunication and missed coverage, and the Nuggets got a lot of wide-open looks off backdoor cuts or just routine Knick confusion.

- Amar'e Stoudemire had trouble getting involved in the offense to the point that he did not attempt a shot in the fourth quarter or either of the overtimes until he sank a meaningless three in the closing seconds.

- The Nuggets, who have had considerably better fortunes than the Knicks since the Melo deal, got big contributions from Danilo Gallinari (a career-high 37 points on just 19 shots, as well as 11 rebounds) and Timofey Mozgov (16 and 7), not to mention Al Harrington (24 and 11 off the bench).

So, just to summarize, that's the Knicks perilously deferring to Melo down the stretch, Amar'e getting lost, the Knicks getting confused on defense, and the Nuggets getting the better of last year's blockbuster trade all in one painfully prolonged basketball game-- a tidy little microcosm of every unpleasant thing we've had to bear with our eyes and ears so far this season.

Take the jump for a few more details.

- After shooting 1-8 from downtown in the first quarter, the Knicks ('s bench) hit five of six threes in the second. The Knicks' lost the first quarter and dominated the second. They'd go on to finish 11-33 on the night. I don't really know where I'm going with this besides saying that the Knick offense works a lot better when folks hit open outside shots. Obviously, that second quarter spurt is unsustainable, but somewhere in between that and the rest of the game is where the Knicks desperately need to be. Melo's isolation ball killed them late in the game, but so did a team-wide inability to hit wide-open jumpers (many of which would have been Melo assists).

- But really, Melo got downright toxic at the end of the game. Everybody and their milkman knew Anthony was going to shoot, and roughly that many people would come to defend him, but he'd still get the ball, clear out, and noodle his way to an off-balance jumper of some sort. Of course, being Melo, he hit a number of those preposterous shots, and pretty much single-handedly carried the team to overtime in the process. As has always been the case, though, more options need to be checked down before Anthony goes one-on-everybody, and that's on D'Antoni, Melo, and everybody else to fix. Melo, for what it's worth (possibly nothing), seemed somewhat apologetic and held himself accountable afterward.

- Here's the bullet about the Knuggets: Danilo Gallinari was sensational. He looks stronger and more confident being a primary scorer than he did as a Knick and hasn't lost any of his ability to bait folks into fouls (and is doing that even more at the rim). Timofey Mozgov had one splendid block of Anthony did an excellent job of moving without the ball when the Knick defense collapsed on a dribbler to make himself open for easy buckets inside (unsurprising). Al Harrington fucked around and scored a lot of points and jutted his mouth guard at people.

- Oh, and Corey Brewer. He, uh...well, he got open as hell for a tip-in that would have won the game but Andre Miller messed up the inbound pass (not long after drilling a three-pointer from out of bounds). Anyway, that's what I remembered from the performance of celebrated ex-Knick Corey Brewer. He also continued his streak of 258 straight games with very elegant eyelashes.

- Amar'e Stoudemire hit a few shots-- jumpers and one wild, spinning layup-- early, but did very little offensively the rest of the way. When the ball did find him, it tended to be early in the possession, and he tended to keep it moving. This is an improvement on bowing his head and plowing into defenders, but the guy obviously needs to take more than nine shots in a 58-minute game. As with many of this team's problems, Amar'e's offense tends to vacillate between two extremes when a balance really ought to be struck. A steady point guard presence should help with that.

- On the other end, Amar'e got burned plenty of times, but did put in a number of solid defensive possessions. He did a much better job of forcing Nene baseline and deflecting passes and stuff as the game progressed, and that's better than nothing.

- Landry Fields bested his recent fine outing against the Suns with an even Landrier performance. He had occasional trouble with Andre Miller (a match-up that was probably bound to fail), but was soooo much sharper on offense than in weeks past. Fields got many of his 18 points off drives to the rim, and not the ones we were seeing when he was at his worst. These were drives that came either in transition or later in possessions that came off swing passes and attacked open seams in the defense. That's a major improvement over the skittish, meandering dribble-drives we saw from him before. Fields still really needs to get that corner three falling (1-4), but this was a really encouraging offensive output.

- Hey, remember last year when the Knicks were on a miserable losing streak and got a big game from Fields against the Nuggets? Remember what happened after that? I and P&T's WSD noticed the similarities and would fancy a rehash of that turn of events.

- By the end of the game, the Knicks found themselves pretty short-handed. Tyson Chandler fouled out, Iman Shumpert was suffering from the Cramperts (this time in his back as well as his legs), and Josh Harrellson broke his fucking wrist.

- Before fouling out, Chandler made a number of great plays to deter Nugget scorers and corral loose balls (one diving save in particular stands out). His tendency to commit useless fouls and his occasional reluctance to play help defense at the basket both trouble me sometimes, though I suppose I can't be troubled by both of those things at once.

- Iman Shumpert tailed off a bit toward the end (and, again, Cramperts), but was quietly excellent in the first half. He was typically excellent in transition (some gorgeous feeds and finishes. One missed dunk, though.) and sank a few of his jumpers in halfcourt sets. Also, I've noticed that when Shump misses, he tends to miss off the front rim with such force that long offensive rebounds are easy to come by. Kindly Shump.

- Toney Douglas was hitting from outside early, then made several seriously bad plays (mis-timed passes, ill-advised pull-up threes) in the fourth quarter when he had to fill in for Shump.

- Bill Walker single-handedly anchored that huge second quarter and led the team in scoring at halftime with 15. After the break, he came out, made a few reckless plays, and was shelved for the rest of the night. D'Antoni's rope with Walker is definitely shorter than it is for anybody else on the team, and perhaps that's wise. Still, great contributions from Bully in that second quarter.

- Walker's undisputed highlight of the night came during his halftime interview with Al Trautwig, in which he finished the interview by calling Trautwig "Chief" (and apparently Trautwig had some candid comments about that when he didn't know his mic was still live on the NBA TV feed).

- Before succumbing to injury (still not sure what play caused it), I'm pretty sure Jorts scored lefty off a dribble-drive and Euro Step because he is the goddamn truth. Oh, how I'll miss him. 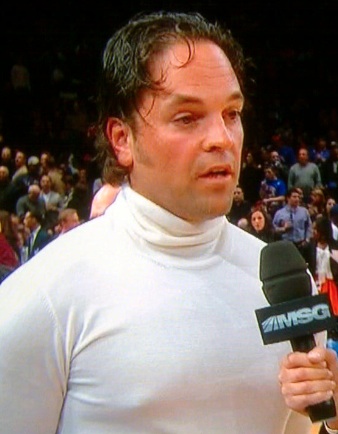 Eh, it's a stretch. I just saw Piazza's greasy, flowing hair, his unnatural tan, and his turtleneck and immediately thought: "SPAGETT!".

- Jared Jeffries apparently suffered a massive head wound before the game. I can't think of any other explanation for the 22-foot jumper he sank, nor the giant white wrap around his head.

- I imagine it's difficult for Mike Walczewski to go from saying "DA-NEE-LO GALL-I-NAAAA-RIIII" to just "danilogallinari", but there didn't seem to be any hesitation or misspeaking on his part, at least not on my TV. Such a pro.

- At one point, a MSG cameraman was pretty badly injured (like, he had to leave and get stitches and stuff) because Al Harrington fell on his head. EMTs rushed over to tend to him but, for some reason, everybody felt it was okay to resume resume playing sports just feet away from the situation. And of course, the ball and the players chasing it kept coming perilously close to the man who was bleeding from his face. Nothing came of it, but that seems unwise.

That's pretty much all I've got. The Knicks competed with a good team despite sub-par performances from both Melo and Stoudemire, which is positive, but they also fell victim to familiar perils and invited nasty stereotypes and storylines in the process. One can only hope that tonight's near-win turns into something to build from. Something at some point has to.