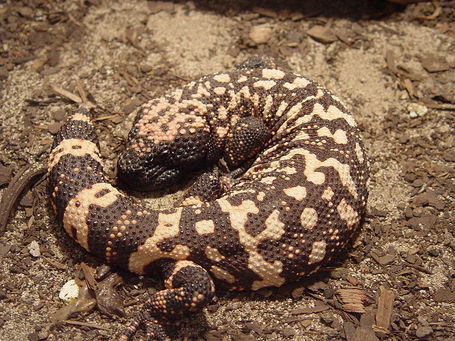 Good day, children! I've netted a few things I saw floating around the web and have prepared them into a li'l reptilian links post for y'all. Take the jump if you'd like to see what's what.

- Gila monsters are the best reptiles, if you didn't know. That's according to Best Reptiles Monthly, which is an online publication I just started about eight seconds ago and to which you inadvertently subscribed by reading this sentence. Please send $29.99 to the BR Monthly at your earliest convenience.

- We occasionally get reminded that the Knicks' old, creepily prohibitive media policy has been back in effect since Donnie Walsh departed. Not only is Glen Grunwald forbidden from speaking to the media, Mike Woodson is, too.

- Remember Oak's Kitchen? No? Well, Charles Oakley used to have a cooking show, and he's still pursuing a years-long dream of starting another one where he comes to your house and cooks for you. He's got lots of years-old testimonials, too, to prove that he's either a great cook or intimidating enough to coerce the likes of Chris Tucker into championing his skills. This was mentioned in one of ny knickerbocker's recent Knicks Reels. Think that's why folks are writing about it again?

- The Post's Phil Mushnick praises Spero Dedes (who, I agree, has done a good job as Mike Breen's understudy despite his tendency to say Amar'e "Stat-e-mare"), then plunges into a fairly epic diatribe about people saying words he doesn't like while announcing fast breaks and stuff.

- The back-to-back-to-back is coming. Don't know how far you've looked ahead on the schedule, but New York plays on Thursday, Friday, and Saturday this week. Make sure to stay hydrated so you don't run out of tears!

- Tyson Chandler is eligible for SB Nation New York's coveted "Player of the Week" award and, you know, I think Tyson deserves a little recognition for his hard work, especially if it's recognition he will never, ever know about.

That's...that's actually it for right now. The Knicks don't play tonight, but I'm sure to have more up this afternoon.