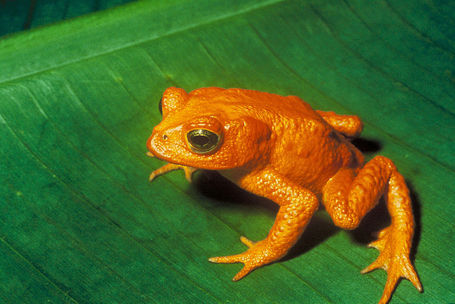 WHAT!? Two batches of mamphibitilian links in one day? Unheard of! Take the jump for MORE links if you're not scared.

- Golden toads are almost definitely extinct. The last one was seen in 1989. What everybody doesn't know is that I can animorph into a golden toad. If you tell them, I'll KILL you.

- First, as an update to the post before this one, Carmelo Anthony said he intends to test his ankle a bit before tomorrow's game to see if he's ready to suit up. Interesting that the ankle is now the major obstacle.

- Baron Davis's newest television project, "I Love Boom", is described as "Curb Your Enthusiasm meets Entourage", which maybe sounds appealing to those of you who definitely aren't me.

- I highly recommend you read today's "Monday Musings" from Zach Lowe. He points to a couple things the Knicks did in the last game to get Toney Douglas and Amar'e Stoudemire the ball in places where they could be at least somewhat effective. Indeed, it did seem like Toney was getting into the paint more frequently and with a greater head of steam than we've seen from him previously.

- Knickerblogger's Jimothy Cavanimal writes on the Knicks' home court advantage, which has been...not so advantageous over at something called the "New York Times".

- Jared Dubin, over at About.com, makes the resounding case that Iman Shumpert, while talented and useful, is a point guard. Wait, I mean he's NOT a point guard. Definitely not.

- These tweets by Newsday's Anthony Rieber are worth a look:

Then D'Antoni said: "Welcome to the club. It’s tough out there."

- Finally, remember those wonderful name pronunciation videos? Well, David Roth spoke to the guy who makes them (and has some examples in case you don't know what I'm talking about).