Good evening, friends. I promise some links, so here are some links. I'll be back at camp tomorrow (and for the rest of the week) for more of my hard-hitting reporting. For now:

- I picked common starlings as today's bird because there were thousands-- literally, thousands-- of them outside the practice facility this morning. If you don't know the story about how European starlings (the ones you're used to) got to America, I recommend learning about it.

- In fact, I think we need this for later use: 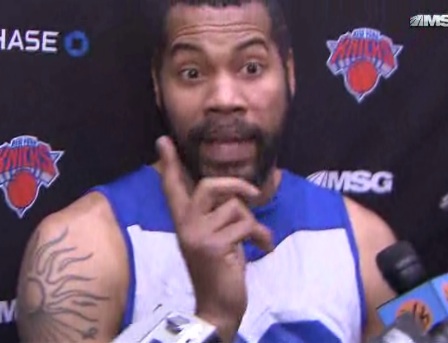 - It has been confirmed, by the way, that Sheed's deal is non-guaranteed. He's battling for a roster spot with, like, Henry Sims.

- The lack of a guaranteed deal means the Knicks have two spots to fill (and Sheed is part of the pool of seven guys trying to fill those two spots). Zwerling says the Knicks and Josh Howard are still talking, but they'd need to cut someone to even invite him to camp.

- If you want to read a long, thorough analysis of Carmelo Anthony's last season from a statistical perspective, click this. If you do not want to read that, do not click it.

- If you want to read a long, humorous dialogue about lasting remorse over the Jeremy Lin ordeal, click this. If you do not want to read that, do not click it.

- Alan Hahn's most recent Fix includes some good stuff about how Jason Kidd is trying to act all veterany.

- The guys are doing film sessions this evening and every evening. Iman Shumpert shouldn't really be allowed to sit in front with that doric fuzz column on his head.