Share All sharing options for: Notes from Day Three of Knicks Training Camp

Hey, okay! After two days of just watching the Knicks stretch and drink smoothies, the media finally got to see some scrimmages today (I was the only one very excited about this, but whatever). We were let in for a good forty minutes or so at the end of practice, and watched the guys run full-court five-on-five for pretty much the whole time. Some notes:

- J.R. Smith sat out of practice today because of a sore left ankle. Both Tyson Chandler and Marcus Camby skipped scrimmages. Regarding those two, Mike Woodson said that the conditioning stuff had been really tough the first few days, and some of the big dudes just needed a little extra rest and massage and whatnot. Everybody's healthy.

- Rasheed Wallace apparently practiced earlier, but was off the floor by the time we arrived. He returned later wearing a huge, sweat-drenched and/or soup-drenched T-shirt with very roomy sweatpants that came down to his calves. Dude looked comfortable. Sheed and Iman Shumpert spent a good half hour putting up jumpers together, which culminated in Sheed giving Shump in-depth pointers on perfecting his lefty outside shot. Seriously.

So, it was more or less starters vs. reserves (there was some swapping later on, but I think that was just Bellfield switching jerseys) plus subs. With Smith, Camby, and Chandler all elsewhere, White (who ran with the blue squad during drills the other day as well) and Thomas became "starters". Blue was coached by Mike Woodson and white by Jim Todd. They had clipboards and looked to be diagramming plays and stuff during timeouts. They played six-minute games with a ref and fouls and stuff.

- These games are pretty disorganized, but blue was generally looking to push the pace first (Felton was very aggressive and got to the basket often), then run pick-and-rolls for Melo and Amar'e. Nothing complicated. White just had Kidd or Prigioni sitting up top (sometimes in tandem with one off the ball) while Shurna, Thompson, and Novak ran baseline curls and got open threes. And they were all open, because the vets don't really bother to close out in these scrimmages.

- Shurna and Thompson both looked nice. They were the stand-outs of the non-guaranteed bunch. Thompson's shot fell more often by my rough tally (including a runner or two), and he looked nimbler away from the ball, while Shurna was more inclined to attack the basket and crammed a few slamjams in transition. Novak mostly deferred, but did drain one turn-around, fall-away, straight-on, buzzer-beating three from way downtown. That group was pretty fun when all the shooters were on the floor together.

- Amar'e was definitely posting up a lot, which makes sense because he was usually guarded by Shurna. On one play, Prigioni-- who is a very talented sneaker-- crept into the paint to strip Amar'e while he was backing down and start transition the other way. Amar'e was pissssssed and barked at Chris Smith a bit, I guess for not calling out the double.

- Pablo threw some reckless-ass passes (different from reckless ass-passes). A few behind-the-back, a few through multiple defenders, and so forth. They didn't all arrive at the intended destination. That's ¡Pablocura!, man. Shit gets crazy.

- Melo played the first few games in a thick, sleeveless hoodie. Between him, Amar'e, and Sheed, this team has really opened me up to a dazzling variety of sleeve/pant leg situations I never knew existed.

- Regardless of sleeve setup, Melo was hitting his jumpers. Really stepping into 'em. He and Amar'e both seriously dogged it on defense, but that's just how training camp scrimmages go.

- Henry Sims throws some sexy passes out of the post. That was a thing people said about him, no? It's true. I really like Henry Sims.

- James White wasn't really looking to shoot. The only thing I can remember him doing besides making entry passes is missing the catch on a badly thrown alley-oop attempt from Melo.

Some photos I took: 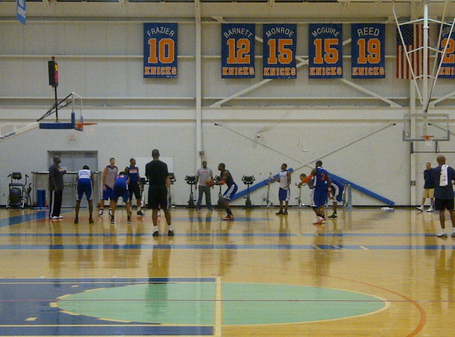 Amar'e at the line during a scrimmage 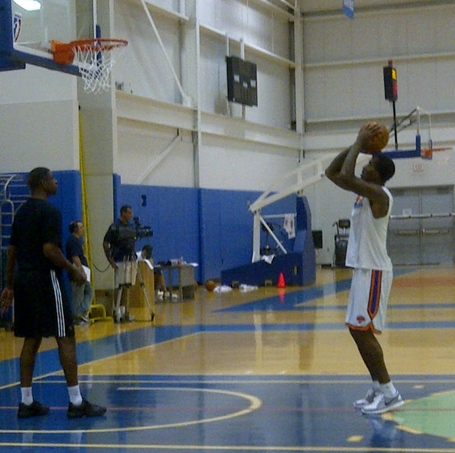 J.R. Smith (wearing his uniform shorts for some reason) taking some gentle shots on the side 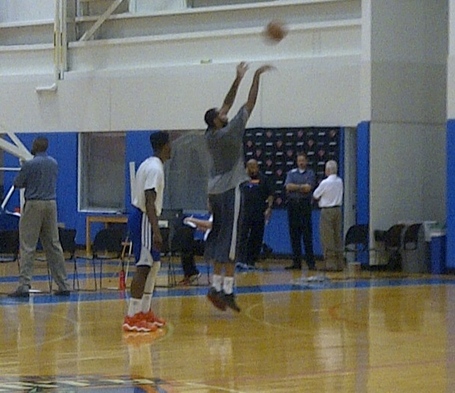 Shump and Sheed shooting on the shide side 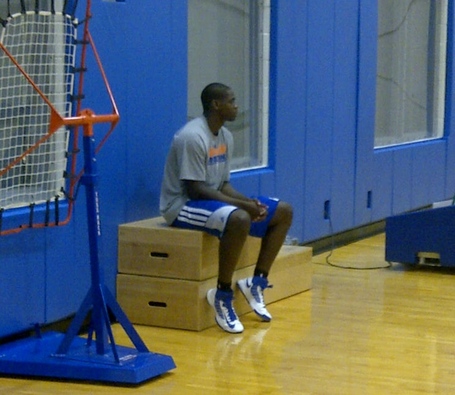 (Ronnie did get some shots up later.) 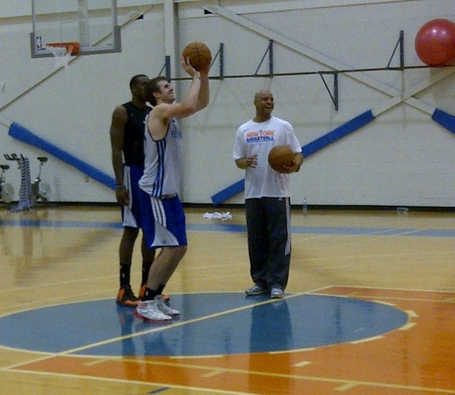 The Knicks all find Shurna's form as funny as we do. Shurna, Sims, and Amar'e took free throws for like twenty minutes after practice.

That's pretty much all I've got from practice today. Hopefully, these session-ending scrimmages are a regular thing, because the opportunity to see some actual basketball is really what brings me to camp. The scrimmages aren't to be read into too much, especially when you're looking at established players, but they're great for evaluating the younger guys and can offer some peeks into lineup experimentation and whatnot. Cool.