Share All sharing options for: Notes from Day Four of Knicks Training Camp

Good evening, children. Happy end of the week. The Knicks held a relatively short practice today, their fourth of training camp. Media were let in just to catch the tail end of scrimmages, but Mike Woodson told us afterward that the team had done less conditioning than previously and moved on to working on defensive sets and more prolonged scrimmaging. A few notes:

- J.R. Smith, who is fine but has a sore left ankle, practiced today. Marcus Camby sat out with a sore left calf. Amar'e Stoudemire practiced but skipped the scrimmages to get some rest. Woodson assured us repeatedly that everyone was healthy, but that he's occasionally going to let guys sit just to avoid wearing folks out. We got a little restless and started asking about Amar'e's back after detecting his absence, but Woodson laughed at us and made it clear that he's totally fine.

- Rasheed Wallace didn't scrimmage today, but he did practice (and wear somewhat athletic clothing). Woodson told us he was working Sheed up to scrimmages, and said he'd get him out there in a day or two. I reeeeeeeally hope I get to see Sheed play in a game before I head home.

- Not only did we not see very much of today's scrimmages, but it was really hard for me to pay attention. They scrimmage on the farther of the two courts, and on the near court, Sheed and Iman Shumpert were shooting and running gentle pick and roll drills. Sheed's just hard to ignore. He kept yelling "GET IN, GIRL" when his shots were bouncing on the rim, and on one occasion he suddenly whipped around and strode over to the scrimmage court to tell the young guys they weren't talking enough.

- Speaking of which, I can at least tell y'all who was with which squad. The blue team was Carmelo Anthony, Chris Smith, James White, Raymond Felton, and Tyson Chandler. The white team was Oscar Bellfield, J.R. Smith, Mychel Thompson, Chris Copeland, and Henry Sims. There were subs on both sides, but that was who was on the floor the whole time we were watching (I think).

- They had real refs out there today, and in that final minute or so of the scrimmage, the ref made several calls that appeared to infuriate every single person in the building. It was pretty great.

- Melo got fouled hitting a three that put blue up one and ended up being the game-winner. J.R. got fouled going the other way (an awful call), but missed the free throws (I swear I only saw him shoot one, though) and a jumper as time expired. Other than that, the only things I wrote down during the scrimmage were 1. Melo posted on the right block on consecutive possessions, one of which saw him make a beautiful pass to White cutting down the lane. 2. Felton hit a three.

- The undisputed highlight of media availability was Tyson Chandler buttoning the top button of Frank Isola's collared shirt and telling him he didn't need to "look sexy" in the gym.

- While everyone was lying on the floor doing stretches, Chandler punched the foam roller out from under Chris Smith's head. He was in a silly mood.

- After stretching, Chandler and Henry Sims went to one basket and shot mid-range jumpers. Steve Novak, in what seems to be a daily routine, set up shop at another basket to hold around-the-world shooting contests against Melo and Chris Copeland. It's like he just hangs out waiting for guys to come and challenge him. I don't really know who won those contests (Steve certainly appeared to do so), but I do know that Jim Todd was playfully accused of tampering with both. Melo threw a (joking) fit because Todd lost count of how many shots he'd taken and didn't pass him the ball quickly enough, then Copeland objected to Todd walking through his periphery while he was shooting. That Jim Todd guy is a problem.

- Shump's still not shooting proper jumpers, but he did spend a lot of time practicing shooting off his right (good) leg and-- even better-- focused on lefty layups and floaters for a while.

- The guys who I've seen doing the most work with Dave Hopla (the new shooting coach) are Felton, White, Chris Smith, and Jason Kidd. They've been on the far court taking passes and instruction from him each of the last few days.

- J.R. Smith said after practice that he'd prefer to start (and he probably will to open the season), but that he'd be open to whatever was asked of him.

Some photos I took (in addition to the one up top, which is of Melo's Novak challenge): 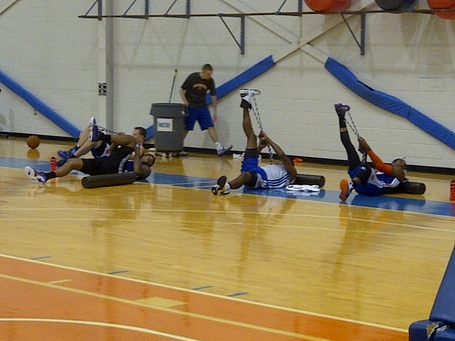 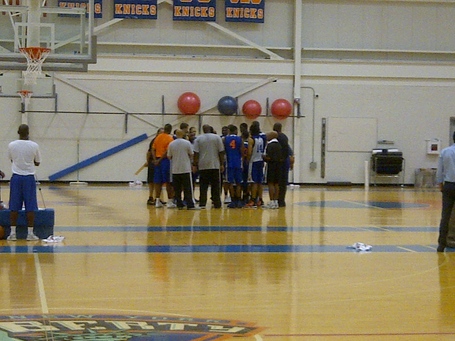 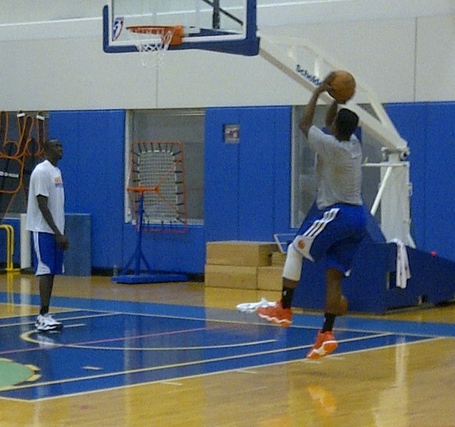 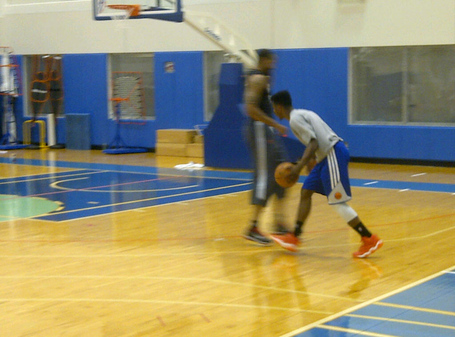 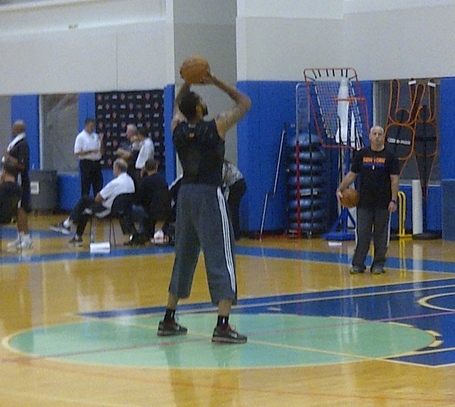 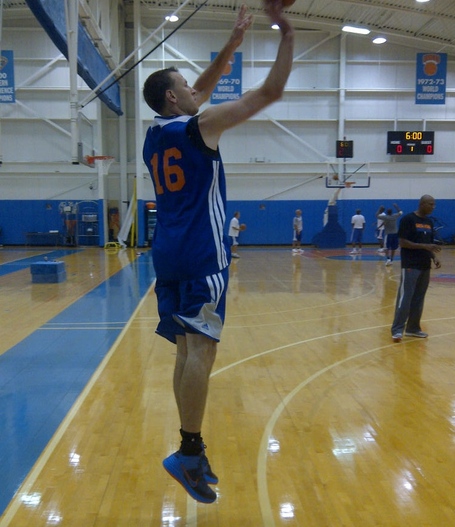 Mmmm. (Hopla working with guys in the background).

That's all I've got. The Knicks will practice both days this weekend, and I should be there for all of it. After that, I'm headed home.