Summary: And on the fifth day, Mike Woodson began installing his offense.

Share All sharing options for: Notes from Day Five of Knicks Training Camp

Good day, companions. I'm back from what was a short, quiet practice and have a few notes and quotes and photes for y'all:

- Marcus Camby missed practice today and will be sidelined for 7-10 days because of a strained left calf. He was out yesterday with just a "sore" calf, but I guess MRI results convinced everyone that he needed to sit for a few days. Amar'e Stoudemire and Chris Smith didn't practice either, but their ills (knee and ankle, respectively) were described only as soreness.

- We saw just the last few minutes of today's scrimmages. Raymond Felton, James White, Carmelo Anthony, John Shurna, and Tyson Chandler were in blue (Oscar Bellfield subbed in for Felton a bit while we were watching) while Pablo Prigioni, Jason Kidd, J.R. Smith, Mychel Thompson, and Chris Copeland were in white (Kidd was playing off the ball).

- I saw: 1. Copeland catch and drill a three up top. 2. Melo really bust his ass defending J.R. 3. Kidd strip Chandler at the top of the key to start a fast break the other way. 4. A Felton-Melo pick-and-roll lead to a pinched defense and a wide open three-point make for Shurna. 5. A nice runner by Felton.

- On that note, only one trend from the last few days of scrimmages really stands out to me, and it's the number of times Melo has been the roll man in the pick-and-roll. He hardly did that last year (22 total times, according to Synergy), but I feel like I've seen him set quite a few picks for Felton during practice.

- Rasheed Wallace practiced and spent the time we were in the gym doing balance exercises while being filmed by a member of the staff (I imagine they collect data like that for all the players and use it to track the progress of training and injury recovery and whatnot. They've got a lot of gadgets. It's pretty cool). He didn't scrimmage, and Mike Woodson told us he's still working Sheed up to being conditioned enough for five-on-five. Basically, with tomorrow likely being my last day at camp, I don't think I'm gonna get to see Sheed scrimmage. It's a damn shame.

- Ya know, I stuck my recorder in Woodson's face with the rest of the reporters. I might as well transcribe a couple things.

Today was apparently the first day of teaching offensive sets:

"We had a nice skull session today offensively. It was the first time we really talked offense. Everything has been pretty much defense. The scrimmage, I thought, went extremely well. We play 18 minutes a scrimmage and there was 35 points put up on the board, so that shows they picked the offense up right away which is kind of nice."

"Years ago, Marcus was playing 30 minutes a game. I'm not looking for Marcus to play 30 minutes a game anymore. So if we can just keep him healthy enough to give us some productive minutes...that's going to be a plus for our ball club."

- I realized while watching Dave Hopla work with guys (White and Kidd today, from what I saw) that I've yet to see him attempt a shot.

- I've told y'all about Steve Novak's daily post-practice routine-- basically, he finds a willing teammate and the two of them trade off shooting threes from each of five spots around the arc while the other one rebounds (and they keep count of how many they've made). Three things about today's episode of the Novak drill: 1. Melo (who's usually his partner) had to leave the floor, so Novak convinced Prigioni to join him. 2. Sheed wandered over like he was going to participate in the drill, but just waited until a rebound came his way, threw down a violent tomahawk, then walked off saying "that's all I needed to do". Oh, and his jersey was on backward, of course. 3. Novak often doesn't miss at all in these drills, but he missed three times during one go-around and, on the third miss, got frustrated with himself and drop-kicked the ball toward the ceiling. It landed pretty close to our little media huddle, and Steve apologized profusely. 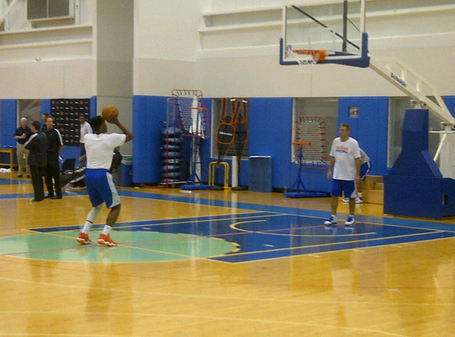 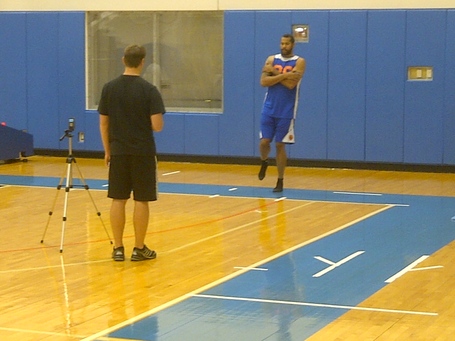 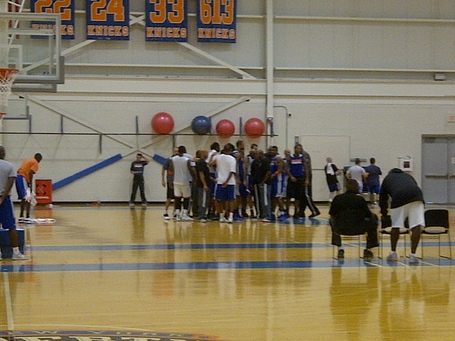 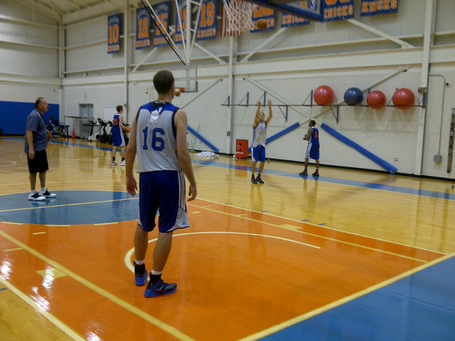 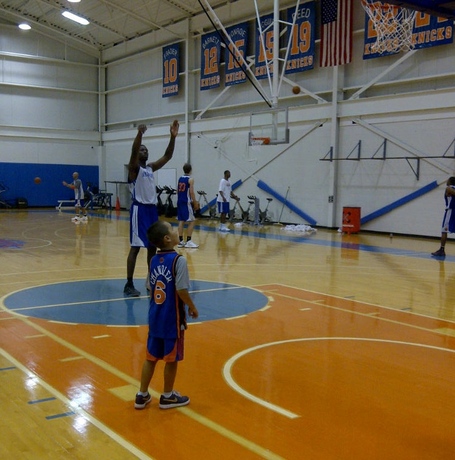 Update: Here's some video I took of Sheed's dunk and Novak's punt (let me know if the video doesn't work):