'Twas a short, easy practice. It's been a long week.

Share All sharing options for: Notes from Day Six of Knicks Training Camp

Good afternoon, cookies. I am back home upstate and done with training camp coverage for this season.There are still a few more days of camp before the preseason starts, and I'll keep reading and linking the stuff out of Greenburgh. In the meantime, here's the last of the stuff I got firsthand in the form of a few notes, a few photos, and a few videos:

- Today's practice was a short one. They got going at 11 and were done by around 12:30. To keep things light, Mike Woodson backed off the conditioning and scrimmaging and divided the team up to work on sets.

- No new injuries today. No Ronnie Brewer, no Iman Shumpert, and Marcus Camby was on day two of the seven to ten he's supposed to miss with a strained left calf.

- Amar'e Stoudemire was back on the floor, and he told us after practice that his ankle injury was just a "small roll". He didn't have any visible tape on it and wasn't walking with a limp or scooting around on his butt or anything.

- Raymond Felton had his right hand pretty heavily taped, including one of those hard hand-shells Tyson Chandler wore after his injury last season. He practiced, though, and Woodson said he "jammed it" during scrimmages on Saturday and is totally fine.

- When we got in, the coaches had four stations set up. At each, a few guys were working on different rudiments of offensive sets with a couple other guys playing token defense. They looked to be rotating in groups from one station to the next, and I saw guys run through different kinds of screens, curls, and post-ups. Just simple stuff run at half-speed by no more than two or three guys at a time. Some video of all that:

"Today was a film and teaching day. Tomorrow we'll come back and get after it a little bit."

"I like some of Mike [D'Antoni]'s offensive stuff and we will keep some of his offensive plays this year, but I have some sets that I like to run that will utilize guys closer to the bucket and Amar'e's one of those guys we'll have to try to take advantage of and use him down there."

Asked if Hakeem Olajuwon would ever join the Knicks staff (Woodson answered a ton of questions about Amar'e's time with Olajuwon):

"No, Dream ain't thinking about coaching coaching. He likes doing what he does."

- Amar'e spoke to the media as well. He didn't say much of note, but did give a detailed description of Hakeem Olajuwon's famous series of fakes against David Robinson. 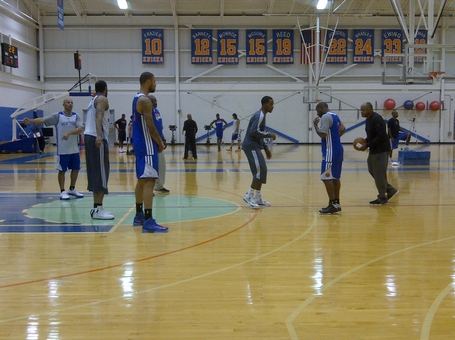 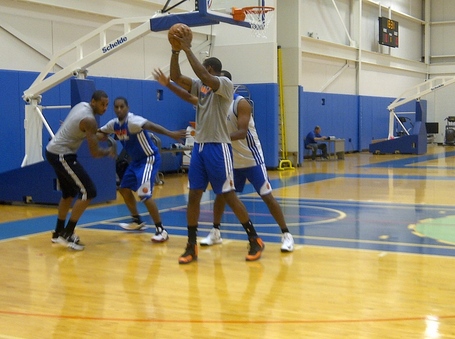 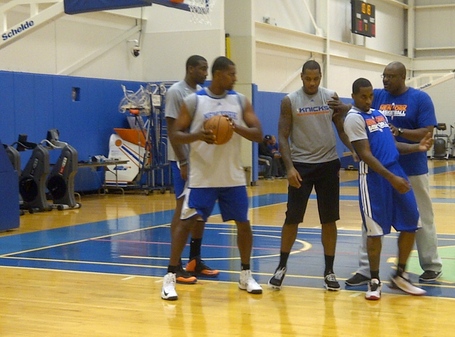 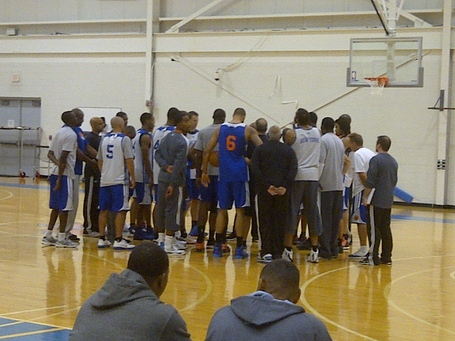 And that's all I've got, friends. Camp will pick back up tomorrow, and I'll keep y'all up to date with any links and tweets and pictures and videos and lithographs I can find. Soon enough, there will be televised basketball for us all to watch together. I can't wait.