It's the Jeffries Scale!

Teaching you how to feel about people.

Share All sharing options for: It's the Jeffries Scale!

Fresh off his foray into Atlantic Division previews, our newest writer/diplomat to China, Joe Flynn, does some science for us. I must say, Joe and I have pretty radically different opinions-- I mean, uh, scientific evaluations-- of past Knicks. Enjoy! -Seth

Now it's official - Josh Harellson is a Heat. (A Heat? Even their team name is low-class.) I won't link you to his Wolverine-bearded Heat team photo, because it's just too damn painful.

There has been a bit of a debate on how to handle the be-jorted Judas. Detractors like to point out that he's just another sleazy ex-Knick chasing an easy ring at the end of the Heat bench - apparently Miami's goal is to have one of those guys every season - and he wasn't even that good to begin with. Jort-diehards will counter that it wasn't his fault that he was traded and released, and he's a good kid trying to make a living. To them, Jorts will be a Knick forever.

How can we settle this debate? How can we determine the Knick-ness (or Knickocity) of an ex-Knick?

Fortunately, we here at P&T are at the forefront of the statistical revolution sweeping the world of sports. For the past few days I've been crunching the numbers, rocking the abacus, and carrying y's like a motherfucker. Now I have emerged from the lab with an infallible system for determining which ex-Knicks you should love and which you should hate. In the style of SB Nation basketball guru Tom Ziller, I've presented my arguments in chart form. Ladies and gentleman, I give you The Jeffries Scale: 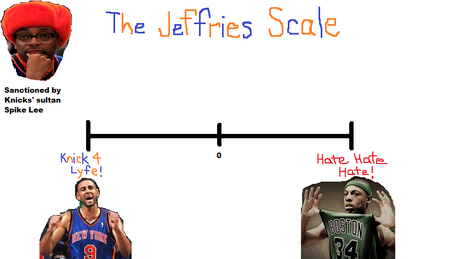 How does the scale work? Originally I tried to base it on the pH scale, but in the decade or so since my last chemistry class I forgot nearly everything about how the pH scale works. I did some research online, eventually stumbling on a reputable-looking medical product site where a video of a talking hand informed me that "balanced pH helps keep you fresh in your special place down there...hail to the V!" I'm guessing that the "special place" is Madison Square Garden and the "V" is for Victory! Go Knicks!

The Jeffries Scale, like all good statistical models, is completely subjective and based on individual prejudice. The only two constants are located at the poles. Jared Jeffries is the Knickiest ex-Knick who ever Knicked - he scores a perfect 10 JJ's. Paul Pierce is the antithesis of everything Knicks - he scores -10 JJ's, or 10 anti-JJ's. No player who has every put on a Knick uniform can match Paul Pierce's score, regardless of gross incompetence, bad attitude or rank odor. According to the Caltech physics department, if a player composed of JJ's were to come in contact with a player composed entirely of anti-JJ's, they would annihilate each other in an explosion I can only hope takes place in American Airlines Arena. A score of zero is Knick-neutral: a player who never really affected the Knicks one way or another, in expectations or results - an Andy Rautins, if you will.

The following test cases are based on my own personal experience as a Knicks fan. When it comes to ex-Knicks, I don't equate Knick-ness with greatness, since the Knicks haven't been particularly great during the career-span of the average NBA player (ironically, most of the current NBA players who were active the last time the Knicks were great are now employed by the Knicks.) Also, I tend not to blame players who were given absurd contracts under the Isiah Thomas regime. Allow me to explain my position on this matter with a folksy, Lincoln-esque parable. Let's say your sleazy meth-addict cousin won the $10 million Powerball, only to blow most of the money on a twenty-dollar hooker: would it make any sense to blame everything on the hooker?

Here are a sample of Jeffries Scale scores, rounded to the first decimal:

Renaldo Balkman: 7.8 JJ's Check that: 2014 Knicks' Sixth Man of the Year Renaldo Balkman. Like Jared Jeffries, you just know he'll be back in a Knicks uniform eventually. I spend an unhealthy amount of time checking Balkman's numbers in order to prove that he was REALLY PRETTY GOOD last year:

Provided by Basketball-Reference.com: View Original Table
Generated 10/2/2012.
You see? The WS/48 score for an average player is .100, so if you ignore the fact that he only averaged 8 minutes per game, Renaldo Balkman was an above-average player. Bring back Humpty!

Chauncey Billups: 3.4 JJ's He wasn't here long, but it's hard not to like him. Also, his amnestification paved the way for Tyson Chandler. Well-played!

Shawne Williams: 8.1 JJ's Now you can see the difference between Knick-ness and greatness. Shawne pooped his way into the hearts of Knick fans in 2010. Seriously, who didn't love Extra E? Then he signed with the Nets, and suddenly turned into one of the worst players in the league. His dismal performance hurt his basketball reputation and cost him serious money. On the Jeffries Scale, however, going to the Nets and then crapping all over them only enhances your reputation.

Channing Frye: 3.3 JJ's One good season, one bad season - the story of his two seasons with the Knicks, and it's generally been the pattern of his career. I never had a problem with the guy, and I'm glad he carved out a career for himself. Get well soon!

Eddy Curry: - 7.9 (7.9 anti-JJ's) Let me tell you an inspirational fairy tale of a poor young boy who found himself with a heart condition. He was scared and he didn't know how he would make it through life. Suddenly, his fairy godfather appeared - think of Jiminy Cricket, if Jiminy Cricket had been a godawful GM who sexually harassed his employees. "Don't be afraid," the godfather said. "I have a magical golden ticket for you. I'll give you $60 million and all you have to do is pretend to play basketball for a few years."

Touching story, isn't it? Of course, that boy went on to blow all of the money on cars and Whoppers, only to lose 70 pounds and win a championship with the fucking Heat. I know I said I wouldn't hold an Isiah Thomas contract against a player, and I'd like to think this score isn't because of the contract. It's for losing 70 pounds after the contract and winning a championship with the fucking Heat.

Jamal Crawford: - 5.2 (5.2 anti-JJ's) I remember a game in December 2004: Pistons - Knicks, at the Garden. The Pistons were the defending champs. The Knicks were shockingly playing .500 ball. The game was on national TV. The Knicks, led by Crawford and Allan Houston came out on fire in the first half. Tayshaun Prince hit a shot to cut the Knick lead to 13 with a few seconds left in the half, and Crawford answers right back with a three at the buzzer. And what does Crawford do? He jumps up on the damn scorer's table like he just won the damn game. You can probably guess what happened next - the Pistons came out on fire in the third and eventually won the game 94-93. Crawford had a great game, but something about that halftime celebration has always stayed in my mind - the essence of those thoroughly unlikeable Knick teams.

Stephon Marbury: - 6.3 (6.3 anti-JJ's) Currently playing for my hometown Beijing Ducks, who, if you haven't heard, won the CBA championship last season. Chinese Basketball Assocation champion Stephon Marbury: it has a nice ring to it. 加油，马布里！

So there you have it. You may have noticed one the especially conspicuous absence of one recent ex-Knick, and to that I will only say that I'm just not willing to talk about that right now. Feel free to rank your most-liked and loathed ex-Knicks according to your own feelings. The Jeffries Scale belongs to the world now.