Share All sharing options for: Pre-Game Reconnaissance: Knicks vs. Pacers- 11/18/12

What's up with the Pacers?

I asked Tom Lewis of SB Nation's Pacers blog, Indy Cornrows and here's what he said:

The Pacers are coming off of their best game of the year after beating Dallas by 20 points on Friday night. Frank Vogel changed up the offensive approach to jump-start an offense that was ranked near the bottom of the league and simply struggling to get and make open shots.

Roy Hibbert has been the poster boy for the offensive woes, getting his share of looks in the post but failing to make routine shots. When the Pacers have played well, George Hill has led the way as a scoring threat in the backcourt.

The most intriguing factor in the game on Sunday will be Lance Stephenson's first pro start at MSG. Stephenson recently moved into the starting lineup and has played quite well despite constantly playing on the edge of out of control. Stephenson leads the regular rotation players in field goal percentage at 49% and three-point percentage at 46%. That may not bode well for the Pacers as a team, but it is a surprising and impressive improvement for Stephenson.

Now we'll see how he handles going up against the old pros in the Garden.

D.J. Augustin- A condition of Augustin's contract is that the Pacers training staff-- just as the Bobcats staff did-- spend several hours per week filing down his upper incisors. They would otherwise grow about a quarter inch per day.

Gerald Green- The Pacers had to end practice early last Wednesday because Gerald got the drawstring on his shorts caught on the ceiling.

Ben Hansbrough- Ben is secretly better than his older brother is at basketball, but has been plagued by injuries. After missing preseason because of an Indian burn, Ben is out once more. He'll miss two to three weeks following what team doctors are calling a "nurple contusion".

Orlando Johnson- The Pacers have granted Orlando permission to conduct his slug races on the sideline provided he only does it at away games, doesn't let races stray onto the court, and euthanizes gravely injured racers on his own time.

Ian Mahinmi- Ian is disappointed to learn that Indianapolis, like Dallas, is an unsuitable climate for his quince trees.

Miles Plumlee- Miles was pleasantly surprised to discover that nobody on the Pacers seems to care about having a two hundred year-old, eternally youthful Confederate infantryman as a teammate.

Stranger: how are you?

You: i'm not bad. a little bored and forlorn.

You: well my friends need my help, but i cannot help

You: not life threatening or anything

You: just my patella

You: it doesn't even hurt, but they say i can't play on it

Stranger: what do u play?

You: well, a lot of things. pinball, french horn, the ghost of morgan freeman in this movie i made

You: but basketball mostly

You: yeah thanks, i have a lot of free time these days

Marcus Camby made you a word search! 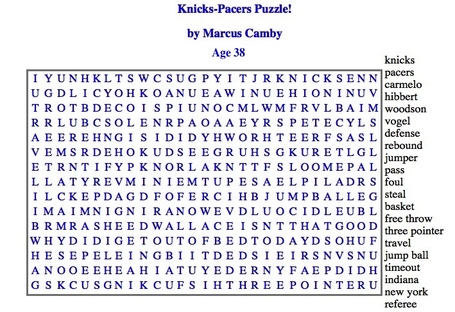 guys listen. guys. guys. look guys i didn't like the way those rats were rebounding over you the other night. goddamn grapedicks think just cause they're big they can snatch all your rebounds away. it's a crime. well these indiana rats are even greedier for rebounds than those other ones. yeah they're gonna come take them all. in our house too. that can't happen. yeah i'm glad you're excited. well guys. guys listen. see what i did is i dipped the game ball in motor oil. guys. those goddamn pissrats won't know what hit them. ball's gonna be slipping out of their hands like a greased egg out a rabbit. well yeah it's gonna be slippery for you guys too but i already told you. wear gloves or something i guess. and yeah don't let the refs touch the ball. ignore the smell too. don't breathe too deep or you're gonna pass out.

And now you're ready for Knicks-Pacers!