It was pretty ugly, but the Knicks got back in the win column with a blowout victory over the Pacers.

Okay! That was nice and easy. After finally losing a game to the Grizzlies on Friday, the Knicks had their first bounce-back opportunity this afternoon against Indiana, and they seized it. Despite shooting miserably from the field, the Knicks easily handled a weary, woebegone bunch of Pacers. To compensate for their awful shooting, New York worked for a large turnover differential (19 to 8), stifled the Indiana bigs inside, and finally held a rebounding advantage for once. Like Lord Smackington said in our thread, this was not a handsome game of basketball, but we'll certainly take it.

With the win, the Knicks have yet to lose consecutive regular season games under Mike Woodson. The 7-1 start matches their best of all time. Pretty cool. I don't have too much to say about this one, but let's go over the individual performances.

- Carmelo Anthony put in another solid, workmanlike game. David West is a tough match-up and he got his points, but Melo did a terrific job of denying West the ball and wrasslin' inside to make sure he didn't get second opportunities. On offense, Melo blended isolation jumpers (which stopped falling reliably after the first quarter) with gumption and determination in the post. He got blocked and bumped quite a bit on his drives and post-ups, but continued to pursue those at-rim opportunities, rebounding plenty of his own misses along the way.

- After shanking a couple floaters early on, Raymond Felton mostly looked to shoot over the sagging Pacer defense. Most of his points came in a bunch during the second quarter, and he was otherwise pretty cold from the field (5-15 overall). I still thought he played a solid offensive game. I loved watching him penetrate and change his pace/trajectory at the free throw line to either accelerate or delay the play so he could find the right pass. That resulted in a couple nice kick-outs, some accurate lobs to Tyson Chandler, and one beautiful shuffle pass to a cutting Ronnie Brewer. They were sparse, but I also enjoyed the sets in which Felton worked off the ball, including a few screen-the-screener joints and a very speedy layup off a hand-off thing from Jason Kidd. Felton did a nice job defensively as well, clinging to George Hill over screens and holding him to 2-9 from the field.

- Kidd himself had a quiet but useful game, mostly making an impact with his terrific help defense (said help defense also allowed the Pacers a few open corner threes, but that's okay). The highlight for Kidd was getting Lance Stephenson to LITERALLY bite on a pump fake. Stephenson came down canines-first on top of Kidd's head, opening a gash that ended up requiring seven stitches. To contain the bleeding while Kidd shot his free throws and cover the stitches thereafter, the Knicks employed a highly advanced wound-dressing technique: 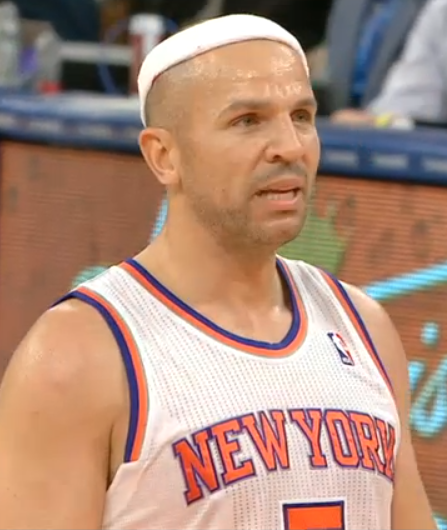 Clyde referred to this as a "utilitarian" headband. I'm not a Curb Your Enthusiasm person, but I've seen enough to get the dead-on Krazee Eyes Killa reference made by flossy.

- Tyson Chandler had one of his best games so far. Chandler, like Melo, ran into good defense and missed some shots inside, but he made up for that by setting a ton of useful screens and finishing lobs (including an and-one lay-oop in traffic) and frustrating the hell out of Roy Hibbert. Hibbert doesn't need much help getting frustrated-- he looked totally discombobulated on offense-- and Chandler only exacerbated his issues by forcing him outside the paint, contesting his shots, and boxing out.

- Ronnie Brewer managed to both take it easy on his knee with just 23 minutes played and put that knee to good use in those 23 minutes. After waaaay overcooking his first jumper and missing a corner three in the first half, Brewer had a superb run of scoring in the third quarter. He made some jumpers (long twos, but we'll take 'em in a game like this) when the defense gave him room and crept to the rim for some easy lay-ins off assists and loose offensive rebounds.

- Rasheed Wallace played great. His shot was off, but he defended the post and snaggled all the available defensive rebounds (seven in 17 minutes). We got two resounding "BALL DON'T LIE"s as well.

- Marcus Camby played! He grabbed four rebounds-- two offensive-- in 16 minutes and even threw himself on the floor to fight for loose balls a couple times.

- Pablo Prigioni's threw one spectacular pick-and-roll pass to set up a big Sheed dunk. His game was otherwise pretty uniformly stinky. He opened playing too tentatively, then overcompensated by forcing a few shots. Pablo spent the rest of his time dribbling away the clock (his clock management leads me to believe they play with a minute-long shot clock-- possibly including a siesta break-- in Spain), but part of that was because the off-ball movement wasn't great.

- J.R. Smith shot well (5-10), grabbed seven rebounds, and disrupted a lot of passes. Quiet, solid game (although that one crossover move with the lefty finish was pretty awesome).

- 3-10 from the field for Steve Novak looks pretty bad, but: 1. It was great to see him getting open looks and 2. He was a perfectly adequate (for anybody else) 3-8 from behind the arc. Still weird to see him rim out more than one open corner three.

- Chris Copeland and James Whit got to spin in garbage time. Cope managed to get four shots up in four minutes. White did not dunk or do anything at all, really.

- Apropos of the Hornets game coming up, Clyde wondered aloud about the guy on the Hornets who can't speak any English but kills the Knicks. Breen had no idea what he was talking about, but I assume he meant Gustavo Ayon, who's on the Magic now.

- Something's up with the Pacers, man. Hibbert and George in particular handled the ball like they wanted nothing to do with it. Their shots gave me Landry Fields flashbacks.

And that's all! The Knicks won easily despite some pretty dreadful execution. They're going to have to do that sometimes, and it's especially important to do at home against a bad team. Nice bounce-back. Back on the road they go.