"He who does not reach the Great Wall is not a real man."

"Steve Novak is a real man."

Because P&T is the fullest full-service blog in the history of sports, I figured I would accompany my Chinese Preview article with some extra photos from last week's Great Wall photo shoot. The wife and I had been planning a day trip to the Great Wall for a few weeks, and I decided to bring along a Novak shirt to further P&T's plot to plant the Knicks' flag all over the world.

Now, when you live in Beijing and want to go to the Great Wall, you have a few choices. It's a long-ass wall, in case you haven't heard, some spots are more tourist-friendly than others. The two most popular Great Wall sites outside of Beijing are Ba-da-ling and Mu-tian-yu - restored Wall sites complete with restrooms, cable car lifts, and a butt-load of tourists. Check out this photo taken earlier this month, during the National Day holiday. 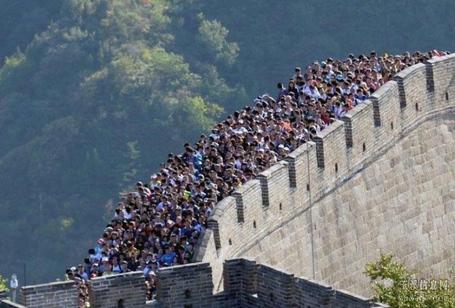 It's all the fun of waiting in line for a kick-ass theme park ride, only to find that line itself is the ride.

I wasn't interested in visiting the restored sections - The Great Wall for Pussies, as I say. I wanted the rugged, old-school, Ming-dynasty Great Wall. We chose a section by a dammed lake that was supposedly closed to the public. 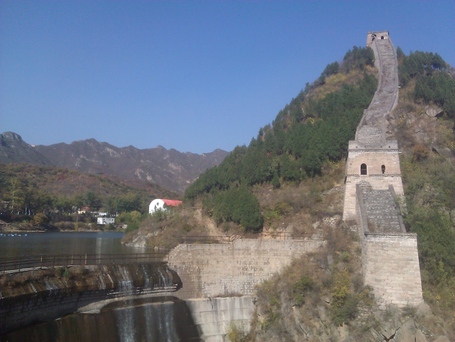 Sadly, we found that their was no way onto the wall itself at that point, only a path up the mountain. 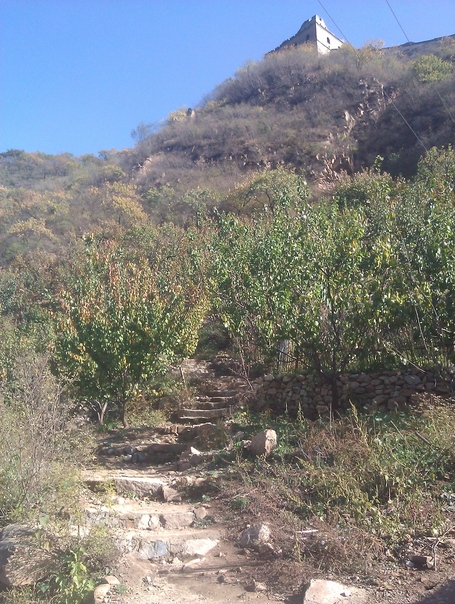 I didn't snap a photo of the decrepit 70-year-old troll of a farmer women who guarded the path, demanding 3 yuan ($.50) for walking on her property. My wife worked herself into a patriotic fury because she believed that the wall belonged to all of China, and I had to throw some bills at the troll and hurry my wife up the mountain before someone called the cops. 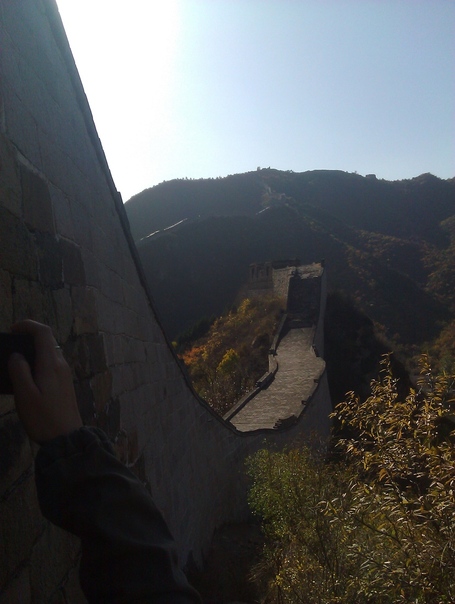 We climbed up the mountain, stumbling alongside the wall, and I was starting to worry that we'd never find a way to get on top of this bitch. At this point, it's helpful to reach back into history, to the construction of this wall and it's purpose. They built it to keep people out, and even today, if you happened to be some poor schmuck walking around on the wrong side of the wall, it's not easy to climb onto the wall from the wrong side. It just happened that we had chosen the wrong side. 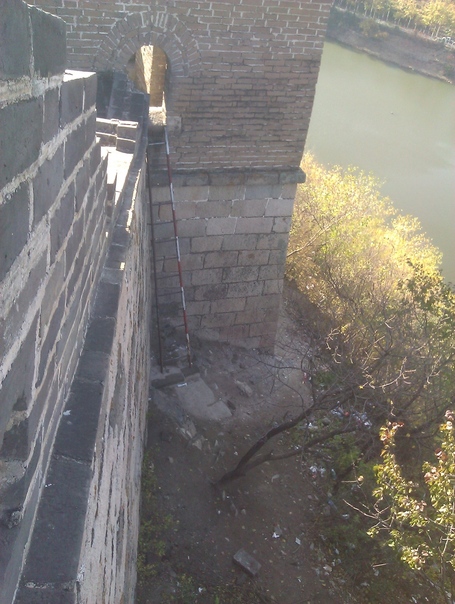 Our salvation came in the form for this rickety death ladder leading up to a narrow guard tower window. I'm not scared of climbing mountains, but I'm freaking terrified of climbing ladders on top of mountains. And that window was not designed for anyone to climb through, let alone a large American. Once I managed to squeeze through the window, I found a much easier descent waiting for me on the other side of the wall. 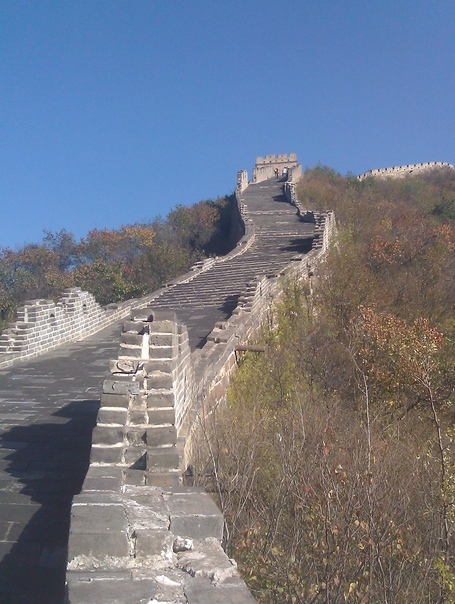 The climb to the next guard tower. Notice the complete lack of people. We saw ten people all afternoon. Beautiful. 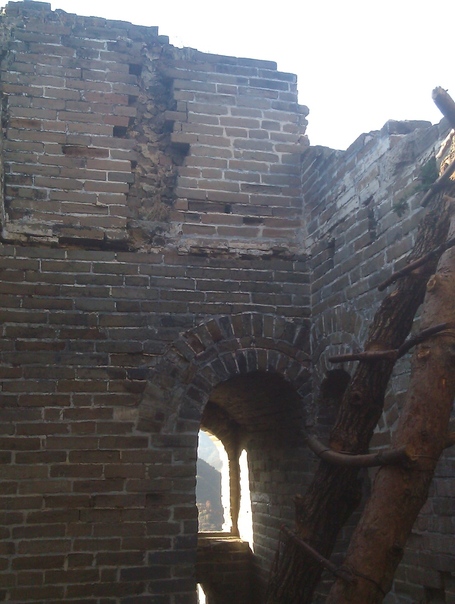 Inside the guard tower. And you thought that first ladder was rickety.... 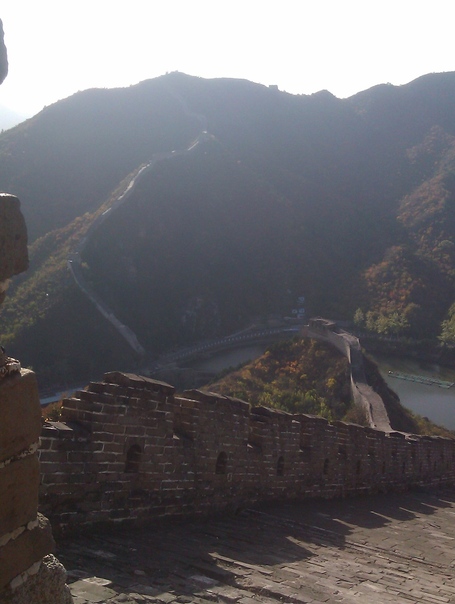 The view from inside the guard tower. 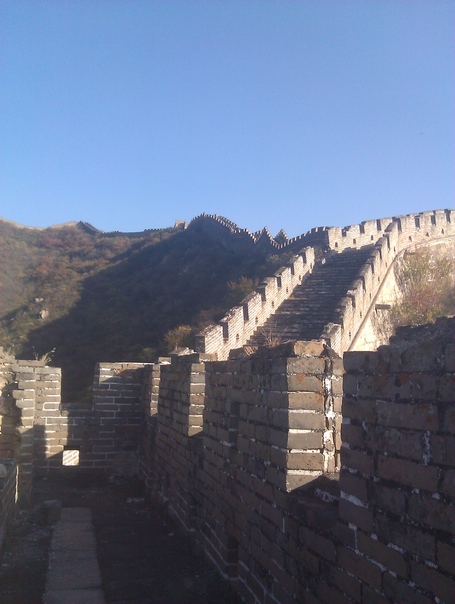 "I think that you would have to conclude that this is a great wall." 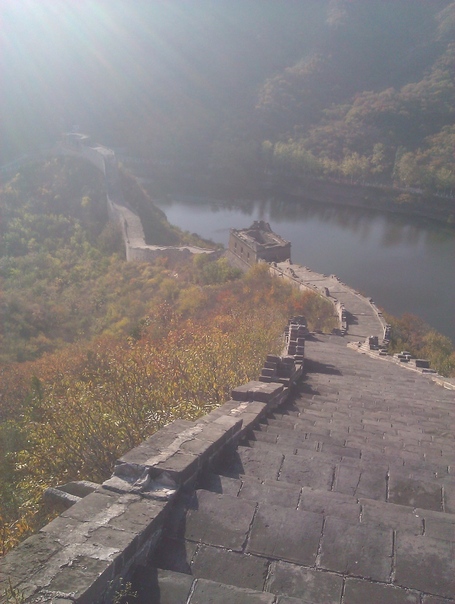 The descent was much easier. We made it down before sundown, took the bus back into Beijing, and got dinner delivered.