Knerdball: The Knicks' Plan for Winning the Battle of NYC

Can the Knicks' brand of efficient basketball defeat the Nets and win the hearts of New Yorkers?

Share All sharing options for: Knerdball: The Knicks' Plan for Winning the Battle of NYC

Let me begin with a question: at what point is it no longer heresy to say that the Knicks' front office actually has a plan? As a writer, putting the words "plan" and "Knicks" in the same sentence just doesn't feel right, like ending a sentence in a preposition. Most basketball fans by now have a pretty concrete image of this team's inner workings: James Dolan couched on a solid-gold beanbag chair, poring over the liner notes of vintage John Mayall's Bluesbreakers albums while Isiah Thomas slips him ridiculous contracts to sign. Knick GM's come and go, but the reputation for organizational incompetence lingered through this past off-season.

The Brooklyn Nets, on the hand, now they had a plan. They hauled ass out of New Jersey, made every effort to distance themselves from their own history of incompetence, and proceeded to build the hippest, urban-est franchise the world has ever seen. Just check out their roster:

This Nets' starting lineup is made up of five little Fonzis...and what's Fonzi like?

The 2012-13 Knicks could never hope to be as cool as the Nets - I know this because every single sports media personality told me this before either team played a single game.The Nets are so cool that they got The Gimp from Pulp Fiction to appear at their games. How could the Knicks possibly top that: by dropping some dude dressed like a 17th century Dutch Knickerbocker from the rafters before each home game?

Knicks' GM Glen Grunwald was left with a difficult choice: he could attempt to Fonzi-fy the roster in a futile attempt to win an escalating Knicks-Nets Cool War, or he could go in the opposite direction. And that, my friends, is exactly what Grunwald has done: to combat the Nets, he has assembled the nerdiest squad of nerds since Lambda Lambda Lambda took on Coach John Goodman and the handsome guy from "Married, With Children". How has Grunwald gone about geeking up the franchise? Let's break it down:

Coming into this past off-season, Glen Grunwald had a problem: his Knicks were too cool. Linsanity had made the Knicks the story of last season, and the Melo-Lin-Amar'e love triangle was burning up the sports tabloids. Lin's popularity and global appeal went against the very essence of Knerdball; he had to go. Now Lin, James Harden, James Harden's beard and handsome douche Chandler Parsons are crushing all the chicks in the greater Houston area, and Grunwald has been left to complete a roster that matches his vision.

To install a nerd culture it helps to bring in a crew of nerds. Among the crop of new Knicks, three players stand out for bringing their particular nerd stylings to this team.

2. A Healthy Dose of Orange

Hey, did you know the Nets have black uniforms now? In case you've been living in a fashion cave these past few months, here are a few of the articles on Jay-Z's fight against the lame-o's and racists in the NBA front office. Apparently the Nets' new uniforms were a crushing blow to racism - does Obama even get reelected without these uniforms? - as well as monumental step forward in sports fashion. Seriously...no...other...team...ever...wears...black...uniforms.

How have the Knicks responded to this fashion challenge? By doubling down on the color orange - perhaps the nerdiest color in the whole Roy G. Biv spectrum, unless you live in Florida. Many Knick fashion followers were surprised when they unveiled the orange waistbands on their blue unis, but that turned out to be merely the tip of the orange iceberg. Check out Seth's article on the Knicks' winter league jerseys. Are the Knicks trying to combat the Nets' impeccable fashion sense by wallowing in the color of buck hunters and crossing guards, or are they just 320 years late in showing their support for the protestant king William of Orange?

It's not enough to dress like a nerd; you also have to think like a nerd. It seems like only yesterday that the Knicks played a hip, up-tempo style thanks to Mike D'Antoni. Everybody enjoyed that style: casual basketball fans, opposing teams, compulsive gamblers who liked betting the over...everyone. Sadly, D'Antoni is long gone - replaced by Captain Nerdlinger himself, Mike Woodson. Just look at this guy: 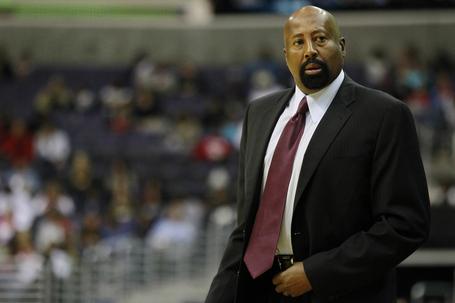 Quick, somebody help me lift him up and carry him to the toilet so we can give him a swirley. Woodson has looked to change the team's culture to focus on defense - not only defense, but the dorkiest kind of defense, team defense. Woodson's defensive approach, while not always perfect, has seemed to rub off this year on one Carmelo Anthony. This guy was brought here to win scoring titles - instead, he's been battling bigger power forwards and communicating on defense. Let me tell you something about defense, Melo: it might win you a game or two, but it won't get you paid, and it won't get you laid.

The Knicks' defense has been uncharacteristically crappy the past few games after a historic start to the season, but the Knicks have stayed in games thanks to their offense. There's nothing nerdy about offense; chicks dig points, right? It's true that they are among the leaders in points per game, but they are scoring those points in a nerdy way. The Knicks are currently near the bottom of the league in pace, which means they're not getting those panty-melting fast-break points. Instead, they are putting up points thanks to a panty-drying offense that is operating with the efficiency of an assembly line. Only two kinds of people care about efficiency: nerds and Germans. The Knicks have the lowest turnover rate in the league, and they are third in the league in eFG%. What is eFG%?It stands for effective field goal percentage, and it is weighted to represent the fact that making a three-point field goal is more valuable than making a two-point field goal. That all sounds a little complicated - the only thing you need to know is that, according to the old-guard sports writers, any statistic that combines both upper- and lower-case letters must be a nerd statistic.

The Knerdball approach has produced some interesting results. Following yesterday's win, the Knicks are averaging 103.4 points per game, which is good, but not really out of line with what D'Antoni's Knick teams averaged: 106.5 PPG in '10-'11, 102.1 PPG in '09-'10, 105.2 PPG in '08-'09. Those first three D'Antoni teams sure were entertain, weren't they? The highlight of the D'Antoni era was '10-'11. Remember that team, how they made us all believe again? They scored a hell of a lot of points, allowed not quite as many points, and finished the season 42-40. This current team's offense has been even better; in fact, if you go by points scored per 100 possessions, the Knerdball Knicks have the best offense of any team since the start of the 90's:

Check out the O-rating - better than D'Antoni's best team, better than any Knick team in recent memory. The '10-'11 Knicks' offense comes closest, but check out the difference between the two teams in Pace and D-rating. This is the beauty of Knerdball: if you score a lot of points at a slow pace, the other team has fewer opportunities to score. If you take care of the basketball, the other team has fewer opportunities to score. And if you defend effectively, hence the lower D-rating, the other team will do less what fewer scoring opportunities they have. All of this leads to the SRS statistic on the above chart, which factors in a team's point differential and strength of schedule, with 0 being the average. Going by this stat, the Knerdball Knicks are not competing with the D'Antoni Knicks, but with the Knick teams of the early-to-mid 90's. Those teams were pretty damn good, if I recall. The only two Knick teams of my lifetime who are even in the same league as this year's team's 7.99 SRS are the '93-'94 Knicks (6.48 SRS) and the '92-'93 Knicks (5.87 SRS). And the only team in Knicks history with a higher SRS than this team is the '69-'70 Knicks, who managed 8.42 SRS. If you haven't heard of that team I suggest you visit your local library and check out one of the roughly 380 books that have been written about them. The season is still young, of course, but the Knerdball Knicks are keeping some historic company at the moment.

These statistics, while great for the long-term, won't mean much against the Nets. The Nets also play at a slow pace with an efficient offense. Still, this is a more than a clash of basketball teams; this a battle of ideologies. It's Jocks vs. Nerds, live from the Barclays...winner can go home with the Brooklynettes!