Share All sharing options for: Pre-Game Reconnaissance: Knicks at Nets- 11/26/12

What's up with the Nets!?

Here's what my friend Devin Kharpertian of The Brooklyn Game told me:

After faltering on their road trip, the Nets have started to put it together a little more recently. Part of that is because Gerald Wallace returned from injury (aka #CRASHBACK), but the truth is that Deron Williams and Joe Johnson took a little time getting used to one another. Over the past few games, they've begun to develop the kind of synergy you'd like from a backcourt lauded by its general manager as the best in the league. Brook Lopez has been a ball of offensive fire -- you could (and should) make the argument that he's been the team's best player in this early stretch. He's just such an effortless scorer and carried them through the backcourt struggles, particularly in first quarters. Defensively, the Nets are progressing, slowly but surely. Reggie Evans has been a monster off the bench -- everyone knows that he gobbles rebounds like every day is Thanksgiving, but he's also the team's best interior defender so far. In some sense, the Nets are lucky this game got postponed -- the team's seemingly starting to understand Avery Johnson's rotational scheme, and though it's not "there" yet, it's much progressed from training camp.

Andray Blatche- Andray's insistence that he be fed pre-game meals in a high chair has proven difficult, since high chairs are typically manufactured for babies, who tend to be less than seven feet tall. The Nets' attempt to pass a lifeguard chair off as a high chair was met with almost eight hours of crying.

Josh Childress- Josh grew his afro to muffle input to the third, ear he has on his scalp. The ear is extremely sensitive to the calls of whales, which it can detect from hundreds of miles away (and which Josh cannot understand). If Josh doesn't keep his hair long to disrupt the sound waves, the constant din is excruciating.

Reggie Evans- Reggie has made a habit of sleeping alone because his night flops can terrify and even injure anyone sharing his bed.

Joe Johnson- Joe was momentarily worried about leaving Atlanta for Brooklyn because he was worriedt he'd no longer have access to bread, but was relieved to find that many stores in Brooklyn carry bread.

Tornike Shengelia- Tornike's command of English is still fairly rudimentary, yet he manages to use the word "causeway" in context no fewer than four times a day.

Jerry Stackhouse- Jerry flips a coin every morning to determine his "hairstyle" for the day. If it's heads, he wears his completely bald scalp "up", and if it's tails, he lets it "down".

Tyshawn Taylor- Tyshawn always has seeds and crumbs in his teeth because he puts them there. He's trying to make it his "thing".

Mirza Teletovic- Mirza can make objects explode simply by staring at them. It's an ability that could make him one of the most dominant professional athletes on Earth, but one he chooses not to employ because it'd just get repetitive and boring.

C.J. Watson- C.J.'s Nets contract stipulates that he can butter anything in the locker room he wishes to butter as long as it doesn't imperil any of his peers. So far, he hasn't buttered anything or even brought butter into the locker room, which makes Nets executives privately, worriedly wonder why he insisted on the inclusion of that clause.

You: just relaxing and making some drawings

You: getting ready for my game

Stranger: how old are you?

You: i drew a lady dragon

Stranger: hi, looking for females 25 and over to chat!

Stranger: girls name and a girl???

Stranger: i guess so.

You: how do i engage that function

You: actually nevermind i need to stay focused for my game 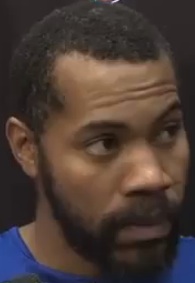 Jerry Stackhouse, man. Jerry and I got up to some serious snacking capers in college.

Yeah, I mean, normal college shit mostly, but you wouldn't believe this one time when we got really desperate.

No, I'm serious. You're not gonna believe me. And if you do, you're gonna think I'm gross.

Okay, fine. I warned you, though. So, Jerry and I ordered late night meals pretty frequently. We'd always get sandwiches from this one place in Chapel Hill, the only place that was open late. One night-- maybe 3 in the morning-- we decided we wanted some sandwiches and called them up to place our order. I called them up from the house phone and it rang and rang. No answer. Tried again, no answer. So we went out and grabbed Jerry's car phone...

Yeah, this is 1994. Jerry had a car phone. Anyway we called off the car phone and still got no answer. We were freaking out. Then we realized it was fucking Labor Day. The place was closed for business.

Yeah, I didn't even know shit closed for Labor Day. Point is, there was no place else to order from, nothing else open, and we had no real food in our place. It was a disaster.

So we go back to watching TV or whatever, and we start talking about all the meats we would eat if they were available. And we're joking around and I mention to Jerry that he's got some meaty arms.

Let me finish. I never had much muscle but Jerry had these beefy-ass biceps. So we're joking and I'm like "Jerry, you got some meaty arms, man. Let's eat your arms."

Yeah, and I'm laughing and stuff, but Jerry's like "you know what, man? Let's try it."

I know, and I thought he was still joking, but then he goes "We're hungry and it'll be a crazy experience and I'm a beast. I can grow more arm meat." And I'm blown away but then we get to talking about how to go about it. I still didn't really believe him, but he was serious.

Yeah, this is gross, but we put a bunch of ice on his shoulder to numb it, then just cut off a little piece with a knife or whatever. Very small piece. He started bleeding, but we wrapped that shit up and put more ice on it. It wasn't as much blood as you think.

But yeah, then we had this little-ass morsel of arm meat and I'm like "what the hell do we do with this"? And Jerry's like "we got to sear it. To lock in the flavor."

Yeah, so we put it in a pan for a little while, got it a nice and crispy crust, then divided it up and each had a tiny bite.

We dipped it in some ketchup, I think. That was all we had.

We just each had the tiniest piece.

It tasted like...I don't know, lamb, I guess? I don't know if we overcooked it but it tasted kind of burnt.

And now you're ready for Knicks-Nets!