Three easy games and one exceedingly difficult game. I've got an idea: WIN THEM ALL!

I don't know about y'all, but I was so pleased with Wednesday's win over my life-long nemesis that I spent most of the afternoon doing my patented Mike Dunleavy Dance all over Beijing. The tellers at the Industrial and Commercial Bank of China seemed more terrified than amused.

The win over the Bucks was a team effort, but let's take some time out to recognize the contributions of the man who, thanks to his court-side interviews, has quickly established himself as the most adorable Knick of all time, Pablo Prigioni, a.k.a. the Latin Ryan Gosling: 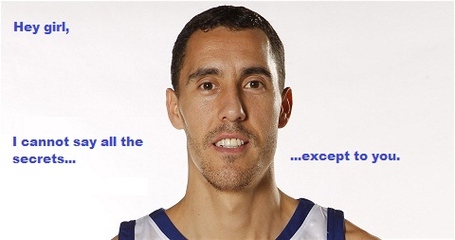 It's hard to believe this guy plays for the same franchise I grew up with - the franchise of Charles Oakley, Anthony Mason and Latrell Sprewell. I'm sending out a challenge to any reader who might have a time machine: please take Pablo back to the 90's and put him on those teams. Remember the infamous P.J. Brown-Charlie Ward brawl that ruined the '97 playoffs? Replace Charlie Ward with Pablo in that situation, and Pablo would disarm the hostilities with some broken-English charm and the power of hugs.

Anyway, on to the previews!

First of all: the Chinese word for a real wizard is 术士 (shu-shi). I'm guessing that the CCP's Minister of NBA naming chose this name to differentiate from the Chinese word for the Orlando Magic, 魔术， which I covered in my first preview. Still, it's a weak-ass name. Back in the 90's the team was know as 子弹 (zi-dan), lit. "bullet." We all know that owner changed the team name for the sake of political correctness back in the 90's, but why should China have to change the name as well? The Chinese don't give a crap about political correctness. If you're reading this, Chinese Communist Party, please change the name back to 子弹.

When it comes to NBA teams who play a unique, easily-identifiable style of basketball, most people think of the Suns or the Celtics. To me, the Wizards have been playing their own style of ball for years, through numerous coaching and roster changes. How to describe Wizardball? The thought process is something like this:

Believe it or not, Wizardball has not led to much team success over the past few seasons. When the club had a player the caliber of prime Gilbert Arenas, they managed to make do a bit of damage in the pathetically watered-down Eastern Conference of the time, but since Arenas broke down (physically and mentally) the team has been mired near the bottom of the conference. Nick Young has been one of the internet darlings of the season so far, thanks to this "shot":

Well Nick Young was raised in the Wizardball system. Last year's team was basically five guys trying shit like this, night after night. Boy, did the Knicks ever enjoy playing the Wizards last season. Check out the Jared Jeffries line - he's the only Knick not to score, despite grabbing two offensive rebounds. That's so JJ!

This year's Wizards squad, believe it or not, is different. They still have Jordan Crawford, a true disciple of Wizardball who will shoot at any opportunity. But they also have a bunch of players - Trevor Ariza, Emeka Okafor - who can defend. The Wizards are 15th in the league in defensive efficiency, which might not sound like much...except for the fact that it would be their best rating since 1997-98! In fact, the last Wizard team to finish in the top ten in defense wasn't even called the Wizards - it was the 1987-88 Washington Bullets, featuring Manute Bol, Muggsy Bogues, Moses Malone (!) and Bernard King (!!!). I think I would have enjoyed watching that team.

At this point you may be asking: "If the Wizards have improved so much on defense, then why were they winless until last night?" The answer lies with their offense...it's bad. How bad? Dead last in the NBA in points per game, points per 100 possession, FG% and eFG%. Their 3P% is a robust 28th in the league, so that's something.

Look, the Wizards just won a game. It's not out of the realm of possibility that they might win another before the year is out. It's a Friday Night Curse game. DO NOT screw this up, Knicks!

The "I Sure Hope This Isn't the Knicks' First Home Loss of the Year" tour rolls on. After years of repeatedly kicking their fans in the nuts by selling draft picks and half-assedly attempting to surround Steve Nash with a championship roster on the cheap, Suns management finally donned the steel-toed boot and delivered the coup-de-grace by trading Nash to the Suns' hated rival. And, wouldn't you know, it's worked out pretty well for them so far.

To replace Nash, the Suns signed his former backup, Goran Dragic, who has been a revelation so far this season, leading the Suns in scoring while shooting .473 FG% / .386 3P% and dropping 6.8 assists per game. Meanwhile, Nash's leg injury has forced him to the bench. Still, he's looking quite dapper in his time off. A word of advice, Steve: you might want to spend more time rehabbing and less time throwing wild parties and obsessing over Daisy Buchanan.

Dragic has been far-and-away the best player for the Suns this season. Luis Scola and Martin Gortat have been fairly average so far, and Michael Beasley leads the team in field goal attempts per game, despite being the team's worst shooter.

I'm not gonna lie: this game scares me a bit. The Suns do nothing particularly well (15th in offensive efficiency, 28th in defensive efficiency), but they push the pace (6th in pace) and they have a guard who can get into the lane. That's been a problem for the Knicks in the past few weeks. The good news is that the Suns are the worst team in the league when it comes to opponent's 3P%. If the Knicks' shooters come to play, this should be a fun game...discount triple-check belts for all!

Can we be honest with each other for a second, people? How many of you, the first time you saw the name of a hot-shot Kentucky freshman named Michael Kidd-Gilchrist, wondered, "Hmm...is that Jason Kidd's son?" I'll admit: I did. Now, I realized he couldn't possibly be Jason Kidd's son the minute I saw his photo; but given the fact that he just turned 19 in September, he could conceivably be Jason Kidd's son, pun intended. When Michael was born, Jason was just beginning his sophomore year at Cal. Ladies and gentleman, Jason Kidd is old!

Just like his non-father did in 94-95, young Michael might just walk away with the Rookie of the Year award, and his Bobcats have been the surprise of the season so far. They are 7-7 and sitting in eighth place in the Eastern Conference, which has to be considered a minor miracle.

In fact, it's probably more mirage than miracle. Their expected win-loss record right now is 4-10, though that might be a bit skewed by the fact that they lost to the Thunder by 45 points a few days ago. This team has won some tight ball games so far, but their roster is just stacked with mediocre players. Kidd-Gilchrist has been a revelation so far, but last year's lottery pick, Bismack Biyombo is averaging a mind-blowing 6.4 points per 36 minutes. (Does anyone call him Biz Mackie, cuz that would be a cool nickname.) Their offense is pretty horrible, but they don't turn the ball over much (8th in TOV%) and they get to the line (7th in FT/FGA). If the Knicks can play the kind of D they just played in Milwaukee - lock down in transition, then slow them down and make them shoot jump shots (29th in eFG%) then they should have success.

In a related note: the Bobcats are still owned by Michael Jordan, and I still hate him. So I enjoyed the hell out of this article. I guess you can't buy fashion sense.

Any fan of Chappelle's Show should enjoy this name. Quick trivia question: who are the five greatest rappers of all time? I could totally see Lebron and D-Wade choking Wyclef Jean while Pat Riley comes in with his man-servant to say, "I'm shuttin' the practice court down -record scratch- unless you get breast milk from a Cambodian immigrant." 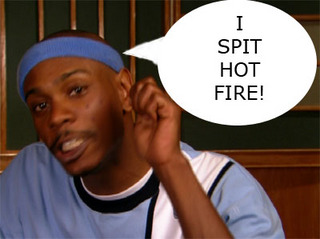 Second game of a back-to-back, in Miami? Uh-oh. The Heat have been uncharacteristically bad on defense...like, 25th-in-the-league bad. Six teams have put more point on Miami than the 104 the Knicks scored during their first meeting. Still, they lead the conference thanks to some clutch 4th quarter buckets by Ray Allen - punches wall - and the league's number one offense. If only a team could figure out a way to stop that powerhouse Heat offense - perhaps hold them 84 points. What am I saying? That's crazy talk!

You know the Heat will be out for revenge; Wade and his cronies would love to back up their "We never should have played that first game in the Garden" talk with a blowout win down in Miami. All three of Miami's losses have come on the road. Still, the Heat have been far from perfect this year, and the Bucks took them to overtime in Miami last week.

What I'd like to see here is a strong performance from the Knicks, win or lose. The flawless ball movement that buried the Heat on opening night is something we haven't see from the Knicks in a while. Can they remember that winning formula in time to give the Heat a challenge down in Miami?

Finally, I'd like to end with an awesome graphic. Ladies and gentleman, your 2012-2013 Miami Heat, ranked in order of PER:

JORTS IS THE GREATEST HEAT EVER! Sure, maybe some of the H8TERZ might counter that he has only played ten minutes total this season, but screw them. Here's hoping that Jorts doesn't play on Thursday night, and the Knicks put another 20-point whuppin' on the Heat...let's help our old buddy Jorts in his quest for the PER title.