Knicks-76ers Leftovers: "It's Three Points. Take that to the head."

Some odds and ends from New York's win over the Sixers on Monday night.

Share All sharing options for: Knicks-76ers Leftovers: "It's Three Points. Take that to the head."

Good morning! Happy Election Day. Before I drive off to try and get my voter status reactivated at the last second because I'm a fool, I've got a few leftover treats from last night's game for y'all to enjoy.

- The J.R. Smith dunk got its own post, if you're looking for that.

And here's some follow-up:

He scored 10 points, last night including an emphatic three-pointer at the buzzer to end the third quarter that gave the visitors an 89-68 lead that was never threatened. In what has become his signature celebration, Wallace pointed three fingers to his head as if pulling a trigger.

"It’s three points. Take that to the head," Wallace explained.

- Mark Simon brings us a "heat chart" for both the Knicks and Sixers last night: 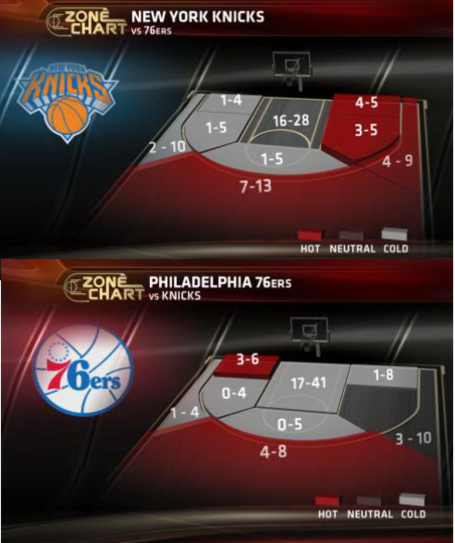 "He's an older version of myself."

"I’m not good on my Spanish and he’s not good with his English, but you can’t go wrong with hand signals."

- I do not understand this, but perhaps you will. Either way I like it.

- J.R. Smith gives a warning to those who dare impede his dunking path.

- Mike Woodson discusses his decision not to take a timeout when the Knicks quickly fell behind last night.

Cool. I've got more links to share and would like to look at some three-game trends. We'll do all that a little later. <3