尼克斯 Means Knicks! A Week's Worth of Previews from the Middle Kingdom

Knicks previews from 13 hours ahead, where our today is your tomorrow, and all the games have already been played.

Share All sharing options for: 尼克斯 Means Knicks! A Week's Worth of Previews from the Middle Kingdom

In the span of three games, the Knicks have gone from "ISO-Melo and the Grizzled Old Farts" to the best basketball team in NYC since the heyday of Red Holtzman. Now, I'm a sports blogger, and we are not easily given to hyperbole - so believe me when I tell you that the '92 Dream Team could join forces with the Avengers, play this Knicks team ten-on-five, and still fail to break 90 points. I know the next 95 games, playoffs included, are a mere formality at this point, but I thought I might take a quick break from ghostwriting Pablo Prigioni's unauthorized biography, "Pablo: All the Secrets," and examine some of the upcoming match-ups.

Chinese Name: 小牛(xiao-niu) lit. "Little Cows". From here on, I will refer to them as "Lil’ Cows" for the sake of adorableness.

And what of these Lil’ Cows? You may have heard that they won the NBA championship a few years back, making them the first team NOT despised by Knick fans to win the title in…well, let’s just say it’s been a while.

Taking his cue from every politician of the past few decades, Lil’ Cow owner (rancher?) Mark Cuban has often veered erratically from reckless spending to poorly-timed calls for fiscal sanity during his tenure as owner. After winning the title he decided to go cheap, electing not to sign center Tyson Chandler (what ever happened to that guy?) A few months ago Cuban tried to sign Jason Kidd after missing out on Deron Williams, but Kidd decided to sign with the Knicks, prompting this entertaining hissy-fit. Long story short, Mark Cuban has done more for the Knicks in the past 18 months than James Dolan has in the past 13 years. Assuming Dirk and Shawn Marion are still out, the Knicks will have more starters (Kidd and Chandler) from the ’11 championship squad than the Lil’ Cows themselves (nobody).

The Lil’ Cows are looking to weather the storm right now with Dirk out indefinitely, and so far they’ve done a fine job…though two of their wins have come against pathetic scrub teams like the Bobcats and the Lakers. Right now this team is most dangerous in the backcourt. They traded for Pacers’ guard Darren Collison in the offseason, and he’s averaged 16 points and 7 dimes in his first five games. They spent some money on O.J. Mayo who’s currently lighting it up to the laughably unsustainable tune of 21-of-33 from behind the arc (I thought only the Knicks did that). Roddy Beaubois is dangerous when healthy, though he turned his ankle the other day. This crew could prove challenging.

As for the frontcourt...Chris Kaman just returned from injury…and I just learned that his middle name is Zane. That’s a pretty badass middle name, and he's scored 54 points in his first three games. That’s all I got.

I can't imagine many experts had this Dallas team going 4-1 in the wake of their own injury-plagued preseason, so this team will be a fitting challenge for the Knicks. Hopefully the Knicks can help these Lil’ Cows "graduate" from Bovine University, as per the classic Troy McClure educational film "Meat and You: Partners in Freedom."

"Come on Jimmy, let’s take a peek at the killing floor. Don’t let the name throw you: it’s not really a floor. It’s more of a steel grating that allows materials to sluice through so they can be collected and exported."

The Chinese have two different words for Magic – mo-shu and mo-fa – and I wasn’t really sure of the distinction, so I needed to do some serious research (i.e. ask the Chinese person sitting next to me). It turns out that mo-fa means the kind of sorcery you might except from a warlock, whereas mo-shu refers to the sleight-of-hand jive your grandfather used to pull a quarter out of your ear when you were a child. And the Magic chose the latter for their Chinese name. Weak sauce, Magic. Weak sauce.

What did the Magic do this off-season? Well, just in case you were living in a cave this summer, I’ll lay it out for you in two words: Arron Afflalo. That’s right, the Magic finally got him! It was a pretty complicated four-team deal, and I’m still a little fuzzy on the details – some picks changed hands, Chris Duhon was somehow involved – but the most important thing Is that Arron Afflalo has a new home, and it’s Orlando.

Coming into the season the Magic’s strategy seemed clear: to tank like no team has ever tanked before, outside of Charlotte. Leave it to those zany Magic, however, to tank their own tanking by winning their first two games. Magic management is going to have to move fast to get this ship pointed in the right (wrong) direction: de-motivational speakers, ex-lax in the Gatorade, maybe even the trusty ol’ crowbar to Big Baby’s kneecap.

When I look at this match-up, the most concerning factor might be it might be one of those rare instances where the Knicks don’t have the advantage at the all-important position of "pasty sharpshooter." Like all good, red-blooded Americans, I love the Grand Canyon and hate former Dukie J.J. Redick. Much to my chagrin, he’s managed to carve out a pretty nice niche for himself with the Magic, and he’s been on fire to start the season. When the Knicks hit the court in Orlando, someone needs to tell Redick that there’s a new 3-point sheriff in town, and they call him the Money Badger.

Clearly, Novak was trying to send a message in these games: the Money Badger reigns from behind the arc. Redick shot a combined 4-of-10 from downtown; Grandma Novak could step out of her log cabin tomorrow and shoot better than 40%. Novak didn't take any free throws in either game, cuz that's just how he rolls. Finally, check out Steve's line for the April 5th match-up: the kid was banging the boards to the tune of ONE offensive rebound! To put that in perspective, he grabbed a total of NINE offensive rebounds all of last season.

The Redick-Novak match-up will be critical - maybe not to the outcome of the game itself, but certainly to my own sense of justice. Not since the break-up of the Soviet Union has their been a more fundamental case of good vs. evil on the basketball court.

We did it again, America: we overlooked the Spurs. Let's all just admit our mistake and promise each other that this time we've finally learned never to take this team for granted...at least until the Lakers' first three game winning streak.

Can we really be blamed for so consistently overlooking this team? They're just so boring. Let's break down what we know of this Spurs team:

Sorry, I must have dozed off for a minute there on account of all the boring-ness.

All kidding aside, this is in many ways the team the Knicks hope they have become. They're not young - their rotation includes six players aged 30 and up, same as the Knicks - but they are deep. Remember how much fun we all had during Monday's game pointing out the seven Knicks in double-figures? Well the Spurs pulled that trick on the Knicks the last time they met - a 118-105 Spurs' win last March. All seven of those players are still with the Spurs, but Knick fans can take solace in the fact that Tyson Chandler didn't play; I wouldn't be surprised if Tyson sent a tape of that game to each and every Defensive Player of the Year voter last spring. Tony Parker led the Spurs in that game with 32 points on 19 shots, none of which came from behind the arc - a downright Rondo-esque performance. It's official: the Knicks have officially arrived in the "We Sure Could Use Marcus Camby" portion of the schedule.

I shouldn't neglect to mention the historic Ginobili - Prigioni match-up. I'm guessing two Argentinian players have met in an NBA game before, but none of those players were Knicks so I didn't give a crap.

This Spurs match-up is what I'll be calling the No Excuses Game. Quite a few NBA fans and journalists have gone out of their way to brush aside the Knicks' performance in the first three games (Too many threes! Heat didn't try because of Hurricane Sandy! Nick Young was prominently involved!). They still have a long season ahead of them, but if the Knicks find a way to beat the Spurs in San Antone then they are unquestionably a team to be reckoned with.

I get the "bear" part, but where the hell is the "ash" coming from? I've never really understood the Chinese technique for naming bears. The Chinese word for panda is xiong-mao, lit. "bear cat." But if they call pandas "bear-cats," then what the hell do they call actual bearcats? I'm still not sure, so I'm calling on any P&T'ers living in Southeast Asia to help me perform a linguistic experiment. Someone send me a live bearcat: 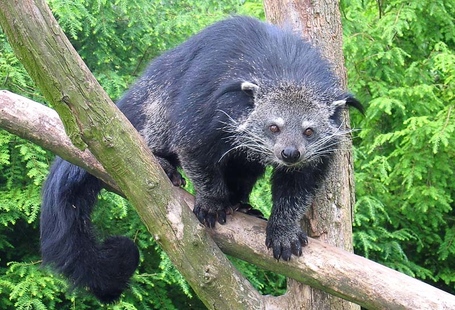 I will then drop said bearcat into a room full of Chinese people and take note of the words they use to describe it.

But let us return for a moment to the Ash-Bears of the NBA, a.k.a. the Fightin' Z-Bo's. Zach Randolph's return to MSG (the network, not the building) should be cause for reflection. As fun as this winning streak has been for the fans, our collective Knicks Kneurosis has been leading us toward thoughts of Amar'e Stoudemire's inevitable return and the chemistry problems that will cause. Let's take a trip back into Knicks history. We've lived through this "can they play together" drama before; only then the main actors were Z-Bo and Eddy Curry, the director was Isiah Thomas, and...I'm done talking about it. This is a good time to be a Knicks fan, people.

The Grizzlies will be an interesting match-up for the Knicks' defense. Marc Gasol has apparently decided to become the Spanish Lebron, averaging 19.3PPG / 7.5RPG / 5.8APG so far this season. They don't have much in the way of outside shooting, but they bang the offensive glass (3rd in the NBA last year in ORB%) and they get to the line (10th in FT/FGA). The Knicks' defensive discipline will be tested, especially on the boards. Leading the Ash-Bear assault on the offensive glass will be our old pal Z-Bo, who is currently averaging a mind-boggling six offensive rebounds per game. Yes, the "We Sure Could Use Marcus Camby" portion of the schedule just kicked up another notch. These two match-ups are prime examples of the value Camby will bring to this team once he finally gets onto the court. The only criticism you could make of the Knicks' defense in their last game was the 19 offensive rebounds they gave up to the undersized Sixers. That won't play against the Spurs and Grizzlies. What better way to shore up a team's rebounding than to bring in the number one rate rebounder in the league last year? Also, you just know Tyson will get into foul trouble in one of those games.

As for me, I'll be watching these next few games from Italy. The wife and I are traveling to Rome Friday night to meet up with my parents for a week of R&R - rest and rigatoni. Here's hoping the Knicks keep up their fantastic overall play, and here's hoping I get a chance to rock the Novak shirt in the Vatican!

Bonus Trivia: The Knicks lost their only meeting with the Grizzlies last season, 94 - 83. Two players lead the Knicks in scoring, with 14 points. Who were they? I'll check the answers in the comments section. No cheating!