Share All sharing options for: Pre-Game Reconnaissance: Knicks vs. Mavericks- 11/9/12

What's up with the Mavericks?

I exchanged some Qs and As with Kirk Henderson of Mavs Moneyball. You can see my As to his Qs here. Here's what he had to tell me:

Dallas is 4-1 without Dirk Nowitzki and with a whole bunch of new faces. How'd they pull that off?

My first reaction is the influx of new players like Darren Collison, O.J. Mayo, Chris Kaman, and Elton Breand. But the real answer is Rick Carlisle. He's been amazing. Dallas played 10 guys in the first quarter last night alone. He's experimenting with line ups and being willing to deviate from a pattern is a big reason for the success of Dallas since he came to town. Obviously it helps to have the aforementioned guys in a system that plays to strengths, but a coach's confidence in his players and system can't be overlooked. The Mavericks are obviously working on borrowed time to some extent because without Dirk the offense will eventually get figured out by opposing teams, but for now, I think every Mavs fan is delighted.

It seems from the games I've watched that Darren Collison's been a great pick-up. He's giving Dallas a drive-and-kick look they didn't really have before, no? What's your impression of him and some of the other major pick-ups?

The focus lately has been on O.J. Mayo, but I really think Collison is driving the ship right now. As much as we loved seeing J.J. Barea in 2011, I don't think he was properly appreciated until last season when there was not a single Maverick who could get in the lane with consistency. Collison doesn't have the vision of Jason Kidd (Who does?) but his ability to probe and kick as well as finish in the lane has been a revelation for Dallas. Considering the type of attention he's getting now, we're all really excited to see what he does with Dirk in that high post pick and roll. As to everyone else, Brand has struggled offensively, but his effort and defense has been fantastic. None of the other Dallas big men are particularly adept at on ball post defense other than Brand, so he's a vital cog off the bench. Mayo has been on fire lately and I really look forward to seeing him develop. Given his history though, I also expect it to be a wild ride with some serious ups and downs. Chris Kaman has been fun; I think on NBA 2K13 he is a zero rating in the defensive awareness category, but on offense he's been awesome. In the twelve quarters since Kaman returned from injury, Dallas has scored less than 25 points once and has gone for 30+ six times. Oh! And Troy Murphy is also on the team to trick the opponents into thinking Dirk is warming up.

It looks like Shawn Marion won't play Friday. How do you foresee Dallas matching up with Carmelo Anthony, whether he ends up playing the four or three?

If we're being honest... no one. If Carmelo sticks to the post area, maybe Brand, but it's going to be ugly for Dallas. I expect rookie Jae Crowder and Dahntay Jones to spend time on Melo, but Marion is nearly as vital to the success this season of Dallas as Dirk is. Dallas will probably try to paper over this problem with the matchup zone defense they've become known for, but the Mavericks also have a big rebounding problem; through five games Dallas is giving up 16.6 per game. So playing against a veteran Knicks squad, things could get ugly in a hurry. Carmelo will cause problems for the Mavericks as they are right now. It'll be interesting to see what they try to do to limit Melo offensively.

Elton Brand- Elton suffers from "odor blindness", which is sort of like color blindness but with scents. Specifically, he's butter/urine odor blind, which makes for all sorts of wacky scenarios and some genuine moments of humiliation that aren't funny at all.

Darren Collison- No matter how many times people tell him otherwise, Darren always shows up to games with a sleeping bag, toothbrush, and flashlight under the premise that he is attending a basketball-themed sleepover birthday party.

Jae Crowder- Jae does not own a bed, nor does he need one. He ties his hair between two poles like a hammock and just sleeps on that.

Jared Cunningham- Jared hardly speaks due to a mysterious neurologic condition that causes him to think his own voice sounds like a bicycle horn honking.

Bernard James- Bernard is proud of his Air Force background, but increasingly annoyed by his coaches' insistence on wedging military time into basketball conversations with him. He's had trouble explaining that phrases like "O-third quarter-hundred" don't even remotely make sense.

Dahntay Jones- Dahntay's teammates were entertained by his shepherd Halloween costume. A week and a half later, he continues showing up to practice wearing a cloak, holding a crook, and distributing grass seed around the locker room, and everyone's beginning to wonder if it was ever actually a Halloween costume.

Chris Kaman- In between stints on the court, Chris wears an Elizabethan collar that prevents him from spotting, killing, and eating his own limbs.

O.J. Mayo- O.J. soaks sticks of gum in Listerine overnight to enhance their mintiness. He also dunks Oreos in Listerine.

Troy Murphy- Troy agreed to join the Mavericks only because one of his friends-- just to annoy him-- drafted Troy in their fantasy league before Troy could draft himself for the ninth consecutive year. He's intent on getting minutes and putting up terrible numbers as revenge.

Stranger: nice to meet you

Stranger: i from japn

You: i am from america

You: but i do have some japanese tattoos on my leg

You: well i think they're japanese

You: could be chinese

You: can you tell?

You: what language is that?

You: well it says

Stranger: My mother is taiwanese

Stranger: The first word is

You: i mean, i don't like the orlando magic

Stranger: The second word is

You: but the overall notion of magic i can definitely get down with

You: i guess birds are okay

Stranger: The third word is

Stranger: There are many kinds of meaning

You: i guess, given the first two words, it should be like "dragon" or something

You: magic bird power would be cool i guess

You: or one particular tree's name

You: or Mark, the tree

You: whoa all scientific

Stranger: Representatives of these three words

You: well i guess that's not terrible

You: the guy who did it told me it'd be something about ultimate force and power and warriors and stuff

You: bird forces! That sounds good

You: thank you for your help

Stranger: This means representatives of powerful

Stranger: These three words have meaning

You: Magic Birdy Tree. That'll be my nickname.

Stranger: Meaning of the representative forest the most powerful bird

You: I'm glad i got it permanently engraved into my leg, then

Stranger: You are a basketball player?

Stranger: I am really touched

You: not many japanese people in the NBA

You: i did play with yuta tabuse for a little bit, though

Stranger: I can't believe it's true

Stranger: do you have fb?

Stranger: It's a beautiful night,

You: it's daytime here, but i'm sure it is

Stranger: Which team do you?

You: i'm on the dallas mavericks

Stranger: You are the first player do?

Stranger: I could be your fan

You: i could be yours! you translated my tattoo!

Stranger: are you Mavericks' Shawn?

You: i am yours. you've been a big help

Stranger: i go to sleep

Stranger: this is my fb page

Stranger: I just wanted to tell you that you look at me

(Here's some background on that tattoo. Our Stranger nailed it!) 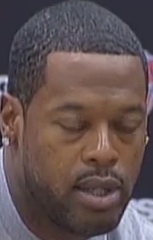 [yawn] What's up, guys? WHASSUUUUUUP. Haha. Who've we got tonight? The Mavericks? That's cool. I guess I'll have to defend Raef LaFrentz then, huh? Don't worry, I'm ready. I've been watching game film on my portable DVD player. Know what else I've been watching on my portable DVD player? Minority Report. Yeah, it's great. Don't tell anybody, but I burned it onto the DVD after downloading it from Kazaa. Yeah. Has anybody seen my trucker hat? Oh well. I'm going to go watch The Weakest Link and drink a Vanilla Coke. If you find my trucker hat or, while we're at it, my t-shirt with a picture of a state and a clever phrase, let me know.

everybody. i hear you all talking about defending the three pointer. stop it. you don't have to. don't ask why. you just don't have to. don't worry about it. nothing. okay fine. do you guys know about spanish fly. of course you don't you goddamn kidbabies. well spanish fly is an after dizzyac fellas and i put some of it in those rats' gatorade bin. bin. bucket. yeah. i put it in there and stirred it around and now they're all gonna be hopped up on the good stuff when they go out on the court. they're gonna be woozy as a bunch of nipcats and they might try to give you kisses but don't worry about that. don't let those rats give you any kisses but do let them shoot threes because they're not gonna hit them. if you see any of them start convulsing you forget we had this conversation okay. good. you're welcome.

And now you're ready for Knicks-Mavericks!